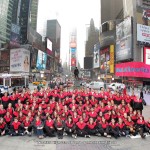 WESTFIELD – The Westfield High School Band was among 24 bands selected to perform at the National Band of Pride salute to veterans and victims of the Sept. 11 terrorist attacks at the site of the Twin Towers on Veterans Day weekend.
For Band Director Patrick Kennedy, it was an opportunity to not only showcase student talent; it was a way to honor Westfield’s victims of 9/11, Tara Shea Creamer, Brian Murphy and Daniel Trant.
“Band of Pride happens every year and when I saw it was honoring the 10th anniversary of 9/11, and knowing there were three victims from Westfield, I made the decision to get involved,” said Kennedy.
With permission from Principal Raymond Broderick, Kennedy submitted a CD and DVD of the band.
“They accepted 24 bands, including us and bands from down South, the West Coast, Canada, and as far away as the Netherlands,” said Kennedy.
Kennedy was very excited the WHS Band was accepted.
“I was glad we were able to do this, because I felt strongly we needed to be there for Westfield,” he said.
Once accepted, Kennedy and the band were faced with the daunting task of raising funds to cover the $30,000 cost of bringing 125 students to New York City. Kennedy said local businesses and the community at-large really came through and made the trip possible.
Kennedy said WHS band members were “well prepared” to perform and did very well.
“They were excited and really understood the whole point,” Kennedy said.
Kennedy said it was an emotional event. For one band member, the experience hit close to home.
Shannon Boley, a WHS junior, has a connection to Shea Creamer, whose brother is her stepfather.
“She was my step-aunt,” said Boley, who was very young in 2001.
“At the time of the attacks she was my best friend’s aunt,” Boley said. “Then, when my mom married her brother, she became part of my life.”
Boley said she got emotional at Times Square when a letter was read about Shea Creamer.
“It was a tragic event, but it brought us together,” said Boley.
Boley said performing at the event felt differently from any other performance.
“Each note had a specific purpose,” she said. “We weren’t just playing for an audience; we were playing to remember what happened.”
Fellow band member and junior Peter Kochanek said, although he had no personal ties to the victims, it was still an emotional and overwhelming experience.
“Being in the middle of Times Square with the other bands to honor those fallen, especially the ones from Westfield, was amazing,” he said.