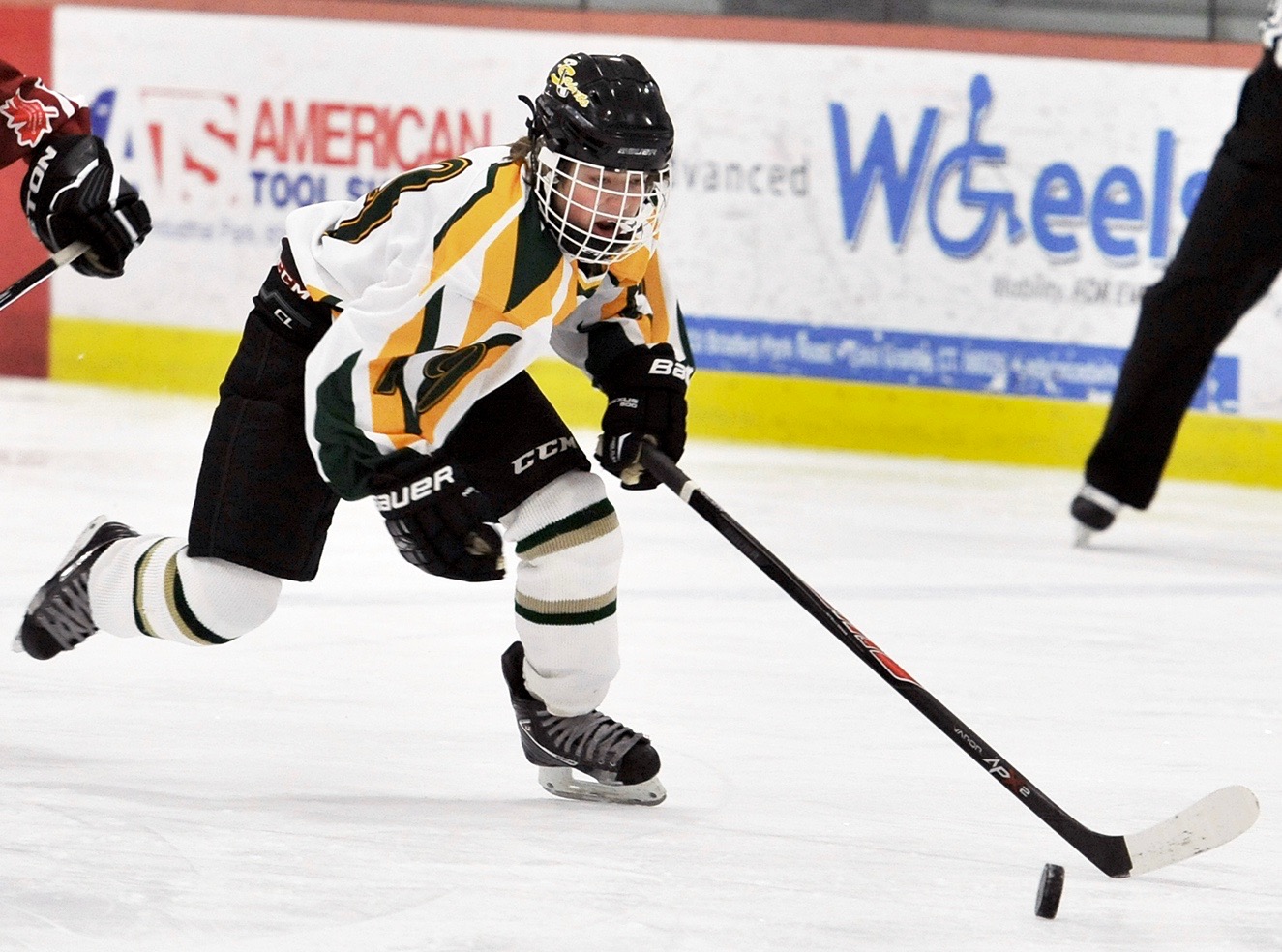 WESTFIELD – The Saint Mary High School boys’ ice hockey team trailed Turners Falls 1-0 midway through the first period Saturday. Knowing full well a loss might mean no postseason again, the Saints rallied for a 3-1 win.
“We just knew we had to come together, and we did,” said St. Mary senior co-captain Johnathan Spear, who took a pass from linemate Shaun Gezotis and beat Turners Falls standout goalie Brandon Bryant for the game-tying goal in the first period.
Just over a minute later, Quinn Powers intercepted a breakout pass and went in alone on Bryant. Powers fired a shot into the top corner for a 2-1 advantage. It stood as the eventual game-winning goal. 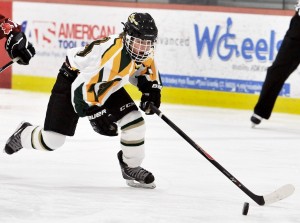 St. Mary’s Johnathan Spear, right, controls the puck during a 2013-14 regular season game. Spear and the Saints will finally get a crack at the postseason, following Saturday’s win over Turners Falls. (Staff Photo)

“He was at the right place at the right time,” St. Mary coach Don Goodreau said. “He had a great shot to the upper corner and buried it.”
St. Mary had players from three different lines score in the game, with Jack Labbe giving the Saints an insurance goal on a wraparound in the second period. The Saints’ head coach said the team’s depth has been a big part of its success this season.
“That’s the thing that makes us different than what we were the last couple of years,” Goodreau said. “We are able to skate more of the kids than we have in the past … It’s tough late in the season when you have injuries and people who are sick and what-not. You have to rely on all of your players. We can run any of those three lines.”
St. Mary also had a strong performance from goaltender Val Reopel, who made 22 saves on 23 shots to pick up the win, the 10th on the season for the Saints. With the win, St. Mary qualifies for the Division 3A tournament for the first time since 2012. The Saints finish out their regular season schedule with a Wednesday evening tune up against Chicopee.
“This is our first time (in the tournament), so we are definitely going to have a lot of hard practices and a lot of preparation for the games,” Spear said. “We will go into Chicopee with the preparation for the postseason and see how that goes.”
D3 TOURNEY NOTES: The Westfield High School boys’ ice hockey team’s chances for the postseason got a lot brighter when the Ludlow Lions lost to Longmeadow 8-1 Saturday. Ludlow (5-13-1) fell to 3-8 in the Berry Division, one full game behind Westfield (8-10-1, 4-8). If Ludlow wins its final game of the regular season against West Springfield (2-9, 6-12-1), the Lions and Bombers would finish with identical 4-8 division records. Both teams split during the regular season. According to the tiebreaker formula, it is more-than-likely now that the Bombers would take the fourth and final spot in the D3 tourney.