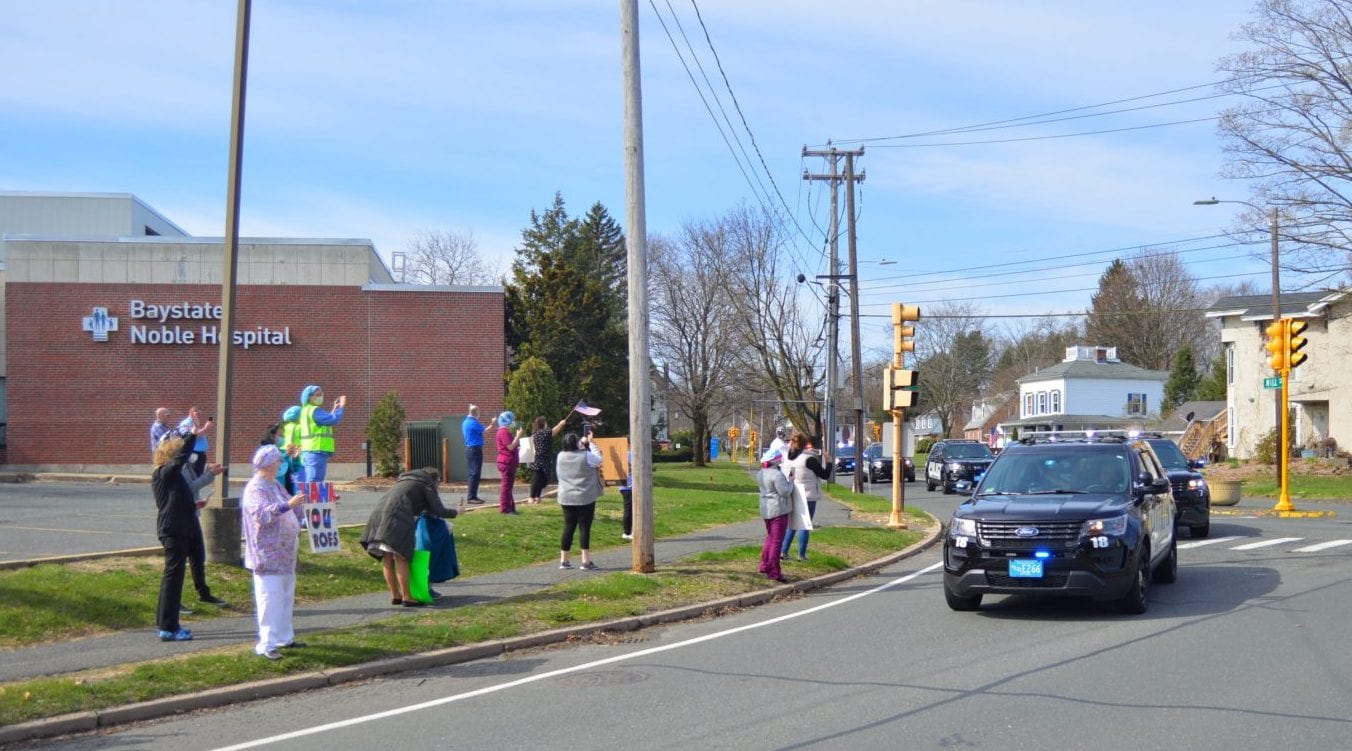 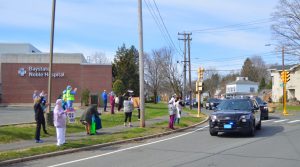 A convoy of police cruisers, firetrucks, and ambulances drive past Baystate Noble Hospital while blaring their sirens to give thanks to those on the front lines of the COVID-19 pandemic. (PETER CURRIER PHOTO)

WESTFIELD- The Westfield Fire and Police Departments took time to say thank you to the Baystate Noble Hospital (BNH) staff Easter morning as they drove by the hospital en masse in a show of support.

A large convoy of police cruisers, fire trucks, and ambulances drove a short route around BNH April 12 as dozens of nurses and hospital staff, some in full Personal Protective Equipment (PPE), stood outside and cheered back. BNH has been receiving patients who have tested positive for COVID-19.

The influx of patients amidst the pandemic has heavily impacted the lives of hospital staff globally. Deputy Fire Chief Andy Hart said that the departments wanted to show their support for the people they consider to be on the front lines of a global crisis. The convoy of first responder vehicles drove up West Silver Street then to Court Street by the BNH emergency department where the hospital staff was waiting.

After driving by the hospital, the convoy then went to the Dispatch Headquarters for the city on Apremont Way to give thanks to a group that Hart says is underappreciated in Westfield. There, the firefighters and police officers stood outside and saluted and applauded the dispatchers who field all emergency calls in the city.

“It all came together with the help of Bruce Brussier from Noble Hospital and Capt. Michael McCabe on the police department side,” said Hart.

McCabe noted that, much to his surprise, the BNH staff turned the tables on Hart.

“I went in to work today to say thanks to the staff at BayState Noble Hospital and the dispatchers at Westfield Emergency Dispatch,” McCabe stated. “Westfield Fire Department Deputy Andy Hart hatched a plan to do a drive by of the hospital and the dispatch center with on duty police and fire personnel just to let them know how much we appreciate all that they do to support our community.

“What happened was exactly the opposite. As we passed by the hospital, we were greeted by their staff and families, all six feet a part, holding signs and cheering as our motorcade went by,” said McCabe. “Our city is truly blessed.”