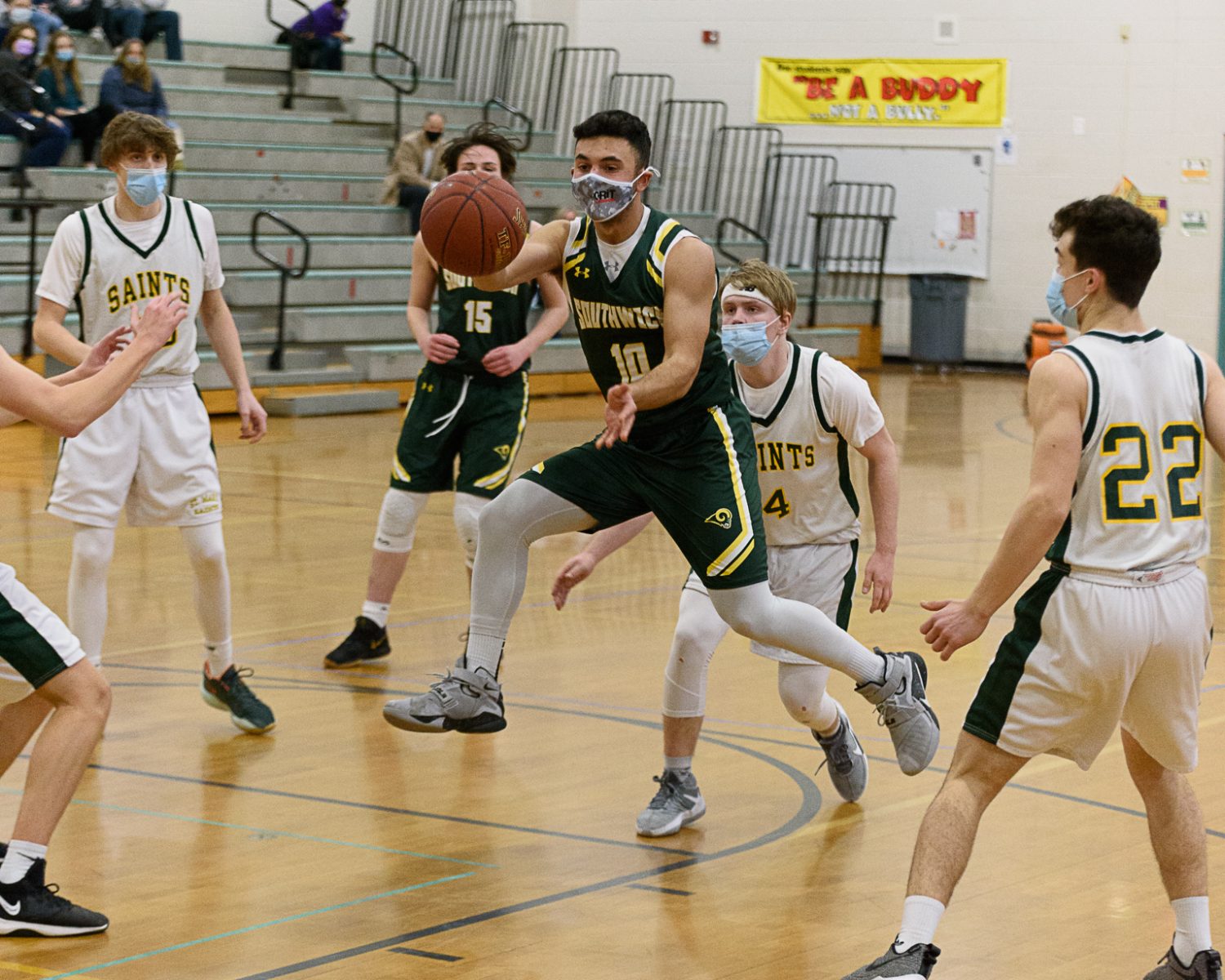 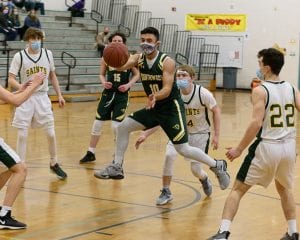 WESTFIELD – A strong start and a solid second-half finish from Southwick’s Grayson Poole made all the difference for the Southwick Regional High School boys basketball team.
Poole opened up Wednesday night’s game against St. Mary’s, scoring nine first quarter points. He recorded 13 more in the second half, racking up a game-high 22 as the Rams powered past the Saints, 46-30.
“This is a great team that we faced; they weren’t no walkthrough,” Poole said of the competition. “I just tried to do as much as I can for my team without being selfish.”
Poole established his presence in the low post from the outset, scoring the game’s first two, and followed up a 3-pointer from St. Mary’s Brady Collins with another two. The Saints countered with another trey as Colin Reed drained the long range shot to give the home team a 6-4 lead.
After Leighton Billings followed with a made free throw, St. Mary’s Nate Campbell made consecutive baskets to give the Saints a 10-5 lead.
Over the next two-and-a-half minutes, the teams made several trips to the free throw line with both teams driving to the hoop, drawing fouls. St. Mary’s emerged with a 14-8 advantage.
The lead quickly shrank when Poole hit a 3-pointer with 1:04 remaining in the opening quarter, and scored a low post bucket before time expired. Southwick trailed by just one, 14-13.
Points were hard to come by in the next quarter.
Campbell and Jonathan Baillargeon hit St. Mary’s lone field goals in the second quarter. The back-to-back buckets gave the Saints a five-point lead, 18-13. A free throw from Colin Cusack increased the lead to six.
Southwick closed out the quarter with a mini run. Poole knocked down a two, and Leighton Billings hit a two and two free throws to pull the Rams into a 19-19 tie heading into the second half.
After a fast exchange of leads in the opening minutes of the third quarter, the stage was set for Southwick’s ultimate game-winning 14-0 run. Poole provided five of those points, Chris Peterson nailed a 3-pointer, and Jordan Drzyda and Rylan Secovich each had two. The Rams led 34-21.
Southwick maintained its double-digit lead throughout the fourth quarter. Every time St. Mary’s attempted to make a dent in the Rams’ lead, Poole answered with a strong inside move, usually resulting in a two.
“After the third quarter, there was no looking back,” Poole said. “We had stamina, refueled, and had energy the whole night.”