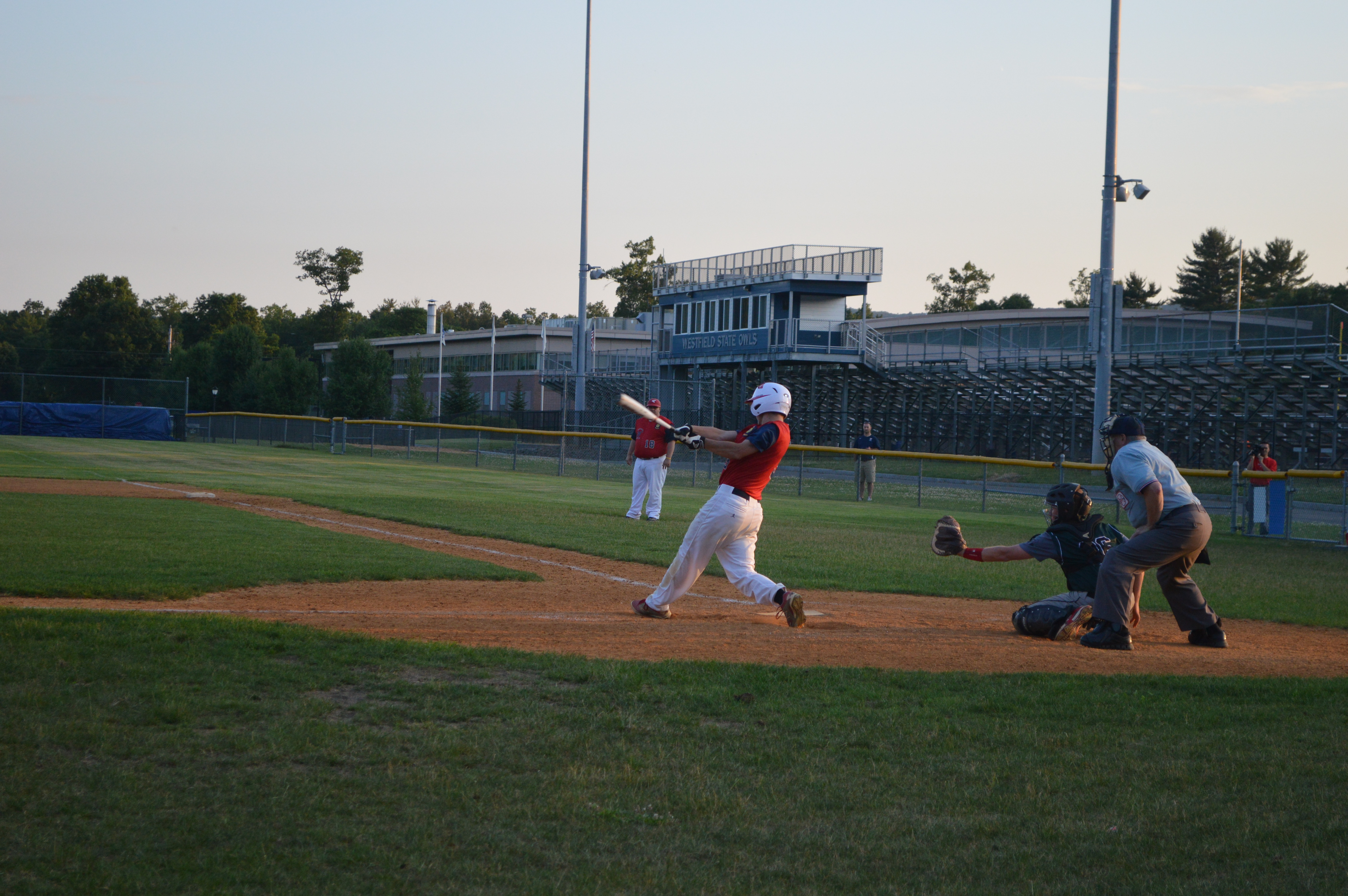 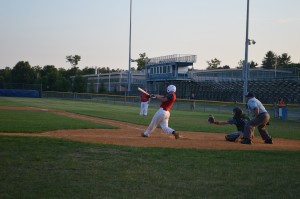 Colin Dunn’s pinch-hit single in the bottom half of the seventh inning drove in Connor Sas and gave Westfield Post 124 a 6-5 walk-off victory. Dunn entered the game as shortstop in the top half of the inning. (Photo by Robby Veronesi)

WESTFIELD – After giving up the lead in the final inning, the experience of Westfield Post 124 fueled a comeback to overcome their first deficit of the game and win their fourth straight.
Pinch-hitter Colin Dunn drove a groundball single under the shortstop’s glove to reward the hosts with their first walk-off win of the season, a 6-5 victory over Wilbraham Post 286 Tuesday night.
“My job was to be a defensive player in the seventh inning,” said Dunn. “When I got up, I knew I had guys on second and third base, (and) I just tried to put it in play and that’s what I did.”
After Matt Indemenico crushed a two-run double to right-centerfield to give the visitors the lead, Tim Donahue led off the bottom half of the inning with a triple. Connor Sas walked and stole second base with no outs.
Brent Houle, the pitcher who earned the win despite giving up go-ahead hit, redeemed himself by plating Donahue on a sacrifice fly. After Matt Irzyk was hit by a pitch, Dunn took advantage and won the game.
For the first time in a few games, Post 124 (8-1) jumped out to a lead early, scoring three runs in the first inning, thanks in part to an RBI triple from Rob Sullivan. The Wilbraham (1-6) defense held Post 124 to just a run during the next five innings, while stranding six men in scoring position.
Sullivan led the offense for Westfield, going 2-3 with a walk, reaching all four at-bats and scoring two of the six runs. Five other Westfield batters recorded a hit and the team added to their aggressive base-running by stealing nine bases.
“I don’t mind exciting games, but I don’t like it quite that exciting,” said Head Coach Don Irzyk. “This team’s got a lot of character and a lot of experience. They’re not going to die. Once we put the pressure on them, then we were able to do the job and come through.
“We had a couple of opportunities where we still could have opened it up. That’s the thing I’m really looking to see. We got off to a great start with those runs early. I guess that’s the nature of how this stuff works.”
The Wilbraham comeback thwarted a solid performance on the mound by starter Tim Kelleher. The Westfield High School pitcher began the game by retiring nine of the first 10 batters of the game before giving up a pair of runs in the fourth inning. Kelleher finished after the first two batters of the seventh inning reached, giving up just five hits over six innings, walking no one and striking out three.
“Timmy pitched well. I was really happy with it,” said Irzyk. “If we made a few plays in the seventh inning, he probably would have gone the distance. I thought he threw very well.”
Post 124 hits the road for the first time since Friday when they head to Forest Park to face off with East Springfield Post 420 Wednesday night at 5:45 p.m.