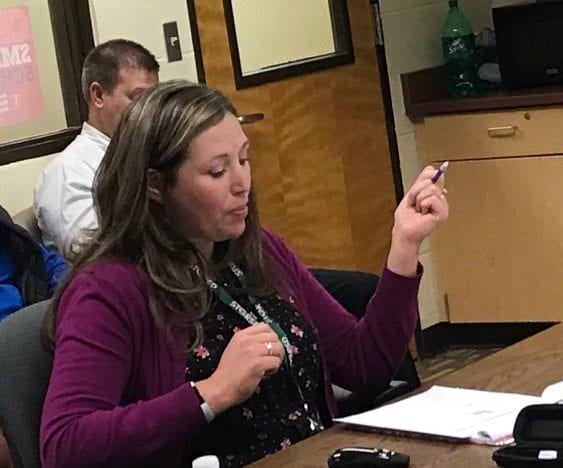 According to the Massachusetts Department of Secondary Education, alternative learning days are a structured day that is a solution to when the district is closed due to weather. This program helps the school district meet the requirements of making sure elementary school students reach the required 900 hours of learning, 990 hours for secondary schools, and a total 180 days. 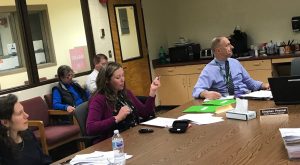 Jenny Sullivan, Director of Curriculum and Instruction for the school district, spoke to the school committee about alternative learning days. (Photo courtesy of Greg Fitzpatrick)

In the presentation, Sullivan announced the results of the parent survey that was sent out to all parents in the school district in late January. Of the 647 responses, almost 90% of parents are in favor of having alternative learning days. Sullivan noted that she and the teachers in the district are happy with the outcome of the survey.

“We were very pleased with the results,” said Sullivan. “Overwhelmingly, people are at least interested in having a conversation.”

For those who weren’t in favor of the idea, the top concern was the pressure that it could put on the parents to make sure their child gets the work done. Some parents were concerned due to the fact that they might be working and then dealing with the snow in their driveway while also making sure their child gets the assignment done. Another concern was that the assignment would mean that the work may not be as high quality as it would be with an actual teacher.

Sullivan then went on to include the benefits of having alternative learning days in the district.

“It would give some opportunities for more project-based learning,” said Sullivan. “These would really be enriching units that could be completed at any time.”

Sullivan added that the assignments on the alternative learning days could be worked on throughout the entire year and wouldn’t have to completed within a couple of days.

After finishing her presentation, Sullivan asked the school committee to make a decision on whether or not to commit on doing a pilot year for alternative learning days. A pilot year would give the program at least one year to be tried out.

School committee member Pam Petschke praised Sullivan for her presentation on alternative learning days and giving her a clearer perspective.

“I’m much more comfortable with this, now seeing it, than I was a year ago,” said Petschke.

Members of the school committee agreed that they would need to have a policy sub-committee be a part of the process if they chose to allow a pilot year for alternative learning days. The school committee is looking to add an action item at a future meeting that would allow them to vote on the matter.