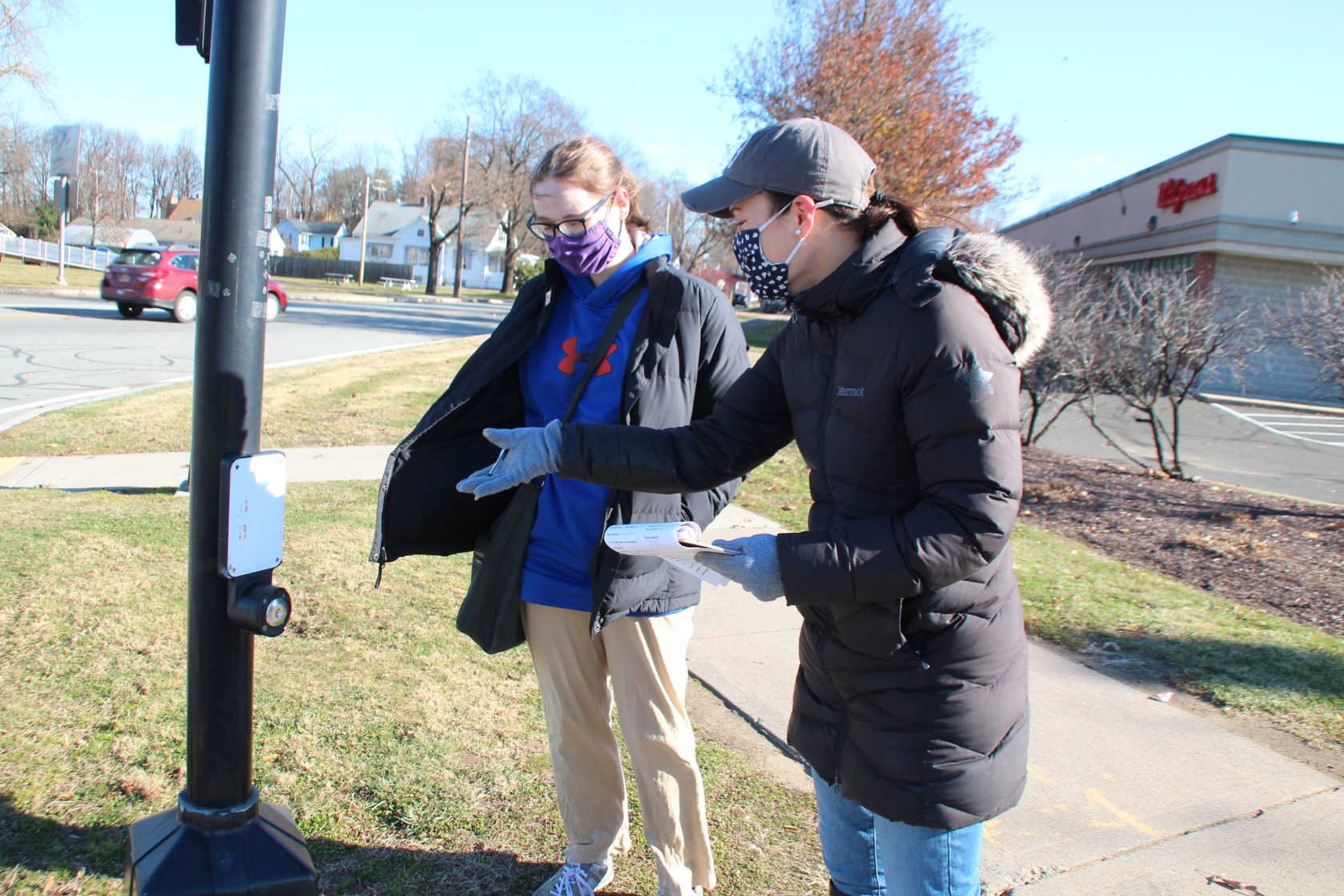 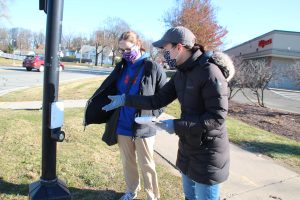 Walking with a checklist of issues to inspect various things associated with crosswalks, Ward 3 City Councilor Bridget Matthews-Kane, right, and her daughter Niamh Matthews found that the instruction plate on this crosswalk light at Broad and East Silver streets was so badly faded that it was completely unreadable. (MIKE LYDICK/THE WESTFIELD NEWS)

Volunteers recorded the number of crosswalks and bike racks in each segment. They also marked the approximate location of each recorded item on a map, and inspected the condition of various items associated with crosswalks, including the readability of instruction plates attached to crosswalk lights, and types of buttons used.

“This information will be useful to the city and others, such as groups planning improvements to pedestrianism in downtown Westfield,” said Austin, who lives in Southwick

Austin doesn’t have any experience in city planning or engineering. But he has personal experience in downtown while using his bike as his primary mode of transport and as a pedestrian.

He formerly attended St. Mary’s High School in Westfield before recently transferring to Southwick Regional School. He saw the “good and bad things” for pedestrians during his rides and walks in downtown.

He got the idea for the project after observing a number of pedestrian concerns one day in early November while walking through downtown. One thing that caught his attention was the pedestrian instruction plate above the button on a signal light in front of Juli & Ali Boutique at Elm and School streets.

“The plate was completely blank. When I walked across the street, I noticed the ones in the little island in the center also were blank, because the instructions were no longer visible,” Austin said. “Things like this can pose a threat to people, especially children, who might not know what the lights indicate.”

The goal of Austin’s survey is to identify which areas of the city need pedestrian infrastructure improvements and then to make recommendations to fix them. Austin also would like to see citizens involved in making these improvements.

Austin said he’s gotten positive feedback for his project: “I haven’t received any negative reactions from anyone I’ve been in contact with in the city.” 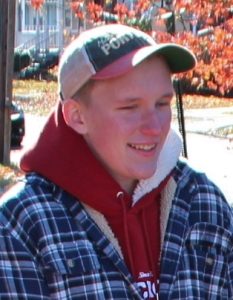 He said city councilors Nicholas Morganelli Jr. and Bridget Matthews-Kane, in particular, have been very supportive and welcoming of his project: “Everyone else I’ve been in contact with has been incredibly helpful.”

All city councilors were invited to join the surveying project, but Matthews-Kane, who represents Ward 3, was the only councilor who participated. She and her daughter, Niamh Matthews, 17, a senior at St. Mary’s High School, comprised one of the survey teams.

Walking along Court Street, Matthews-Kane pointed out a new and wider multi-use sidewalk recently installed using some state funding. She said this an example of the type of pedestrian improvements the city needs. The sidewalk will eventually be extended past the hospital to connect to another multi-use sidewalk on Western Avenue. Conversely, she noted uneven and broken pavement on an older asphalt sidewalk on West Silver Street across from the hospital.

“Walking with a checklist of issues to inspect made me slow down and notice little details: the faded plates on the crosswalk signals, the lack of crosswalks at some crossings, and even the variety of painted crosswalks in this small section of our city,” Matthews-Kane said.

Niamh Matthews, who walks and bikes around the city, commented on a crosswalk light at the intersection of West Silver and Pleasant streets.

“The buttons are extremely difficult to press, as only a very small area of the button senses your finger,” Matthews said.

The mother-daughter team also noted that instruction plates on crosswalk lights at the intersection of Broad, East Silver, and West Silver streets were either completely unreadable or nearly unreadable because the printing had faded. On the plus side, they found crosswalk lights at Broad and Court streets were installed with buttons that emitted an audible tone when pressed.

Matthews-Kane added that although she walks, bikes and jogs through the area on a weekly basis, she saw things on her route that she had never noticed before. She said that particularly in the downtown area, there is a need to make sure everyone, from walkers to bikers to users of public transit, can safely and conveniently travel to where they need to go.

She said that according to MassDOT data, Westfield has had 13 reported incidents involving a non-motorist on its streets during the past year — more than one a month.

“We just had a death in September when M. Leonid Chepurin, a 72-year-old man, was struck and killed by a car while crossing Mechanic Street next to St. Mary’s Church,” she said. “We must work together to ensure everyone is safe on our streets.”

The Ward 3 councilor said Austin’s “focused, data-driven approach” can help show some of the ways Westfield’s streets can be improved: “I’m grateful Max took on this project. I hope this is just one piece of a focused effort to make streets in our beloved community as safe as possible.”

She added that many of the remedies needed to make Westfield’s streets safer are relatively economical and easy.

“From daylighting intersections to bike lanes to lower speed limits to traffic-calming measures, there are relatively inexpensive ways to protect everyone using our city’s streets,” she said. “Max’s project shines a spotlight on some of these issues.”

Austin said he has already identified several changes the city could implement now — from planting more street trees to amending zoning bylaws to require more bike racks to putting parking lots behind buildings instead of in front — to make the city more pedestrian-friendly.  The survey results will be compiled into a report outlining the findings and providing recommendations on how to improve pedestrian safety as well as identify weak points that need more attention. Austin added that an additional focus of the survey will be identifying areas where citizens can participate in improving Westfield through volunteerism.