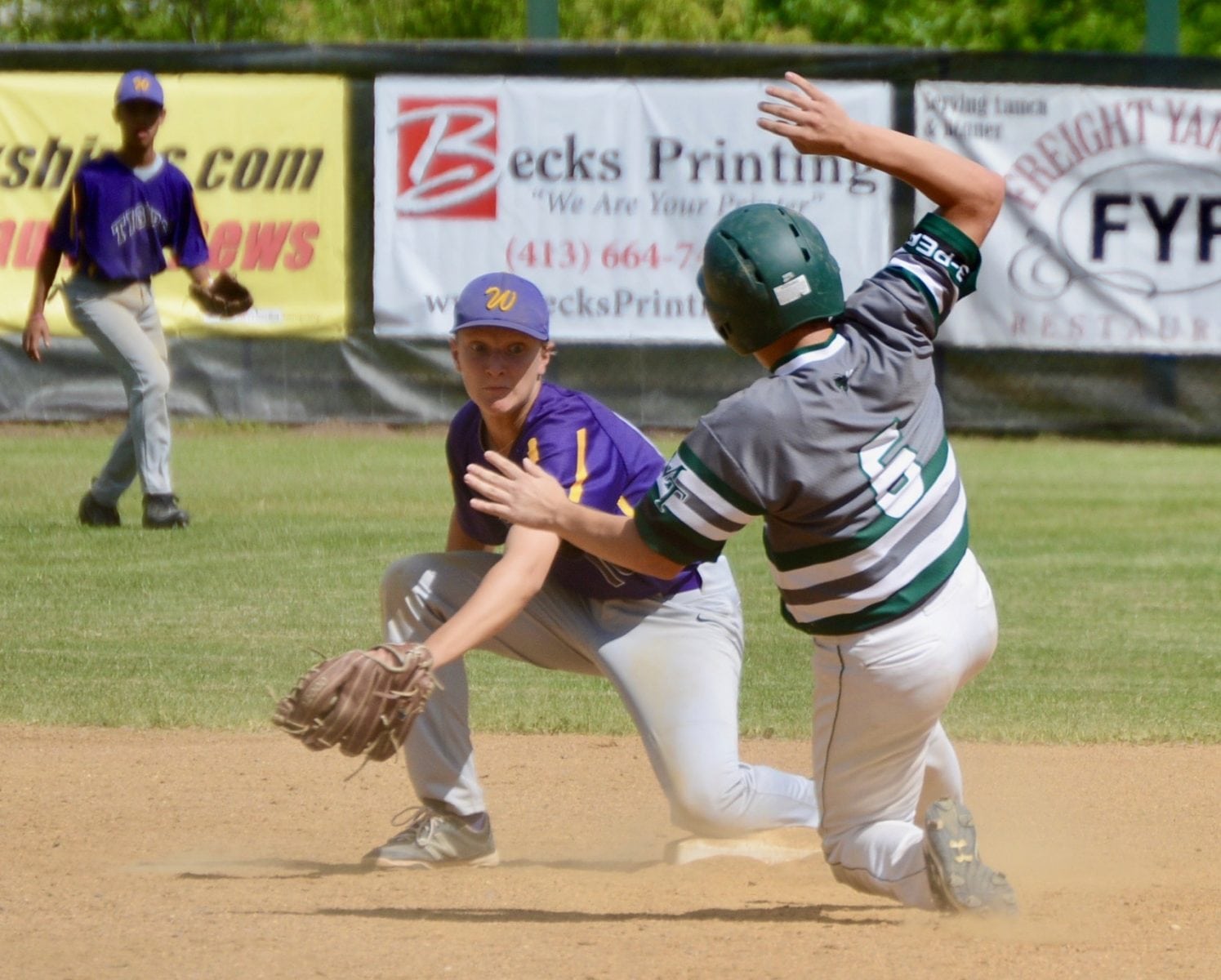 Although local high school sports teams did not fare so well in the Western Massachusetts baseball and softball quarterfinals – they went a combined 1-5 in games Monday – fans will likely be abuzz over one particular semifinal matchup. 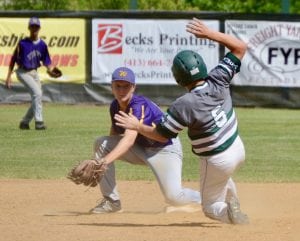 Westfield Tech infielder Riley Sullivan sets up to tag out a McCann Tech base runner on a stolen base attempt. It was the second straight Hornets’ base runner that Tigers’ catcher Chris Boyden threw out in the inning. (Photo by Chris Putz)

WEST D4 BASEBALL TOURNAMENT
QUARTERFINAL
A stinging loss
No. 2 McCann Tech 5, No. 7 Westfield Technical Academy 1
McCann Tech (19-2) exploded for four runs in the bottom of the fourth inning and held off Westfield Tech (12-8) Monday at Joe Wolfe Stadium in North Adams. The Hornets completed a season sweep of the Tigers, winning the matchup for the third straight time.
McCann Tech also captured the MVADA Vocational Small School baseball tournament following the completion of the regular season.
On Monday, McCann Tech pitcher Robert Mattee recorded 10 strikeouts in a complete game victory and had a no-hitter going through five full innings. Westfield Tech’s Brody Zabielski broke up the no-no with a base hit to lead off the top of the sixth.
After Zabielski’s base knock, Andy Daniels drew a walk and Chris Boyden belted a one-out RBI double. Mattee recovered to strike out the next batter and forced a fly out to end the threat.
Boyden threw out base runners attempting to steal second base in the bottom of the sixth.
Mattee had a 1-2-3 seventh to end it.
McCann Tech advances to take on third-seeded St. Mary’s (14-7), a 4-1 winner over No. 6 Pioneer Valley Regional (11-10). The semifinals will be take place Wednesday at Westfield State University at 4 p.m. 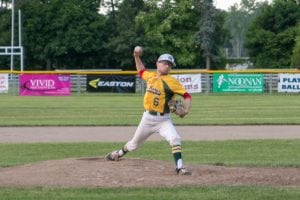 St. Mary’s Powers past Pioneer
No. 3 St. Mary 4, No. 6 Pioneer Valley Regional 1
Third-seeded St. Mary (14-7) broke a 1-1 tie with a three-run fifth inning Monday night at Bullens Field to punch a return trip to the semifinals. The defending state champs will take on No. 2 McCann Tech (19-2) Wednesday at Westfield State University at 4 p.m.
Matt Masciadrelli (walk, run, RBI) and Hunter Authier each went 2-for-3 to lead St. Mary’s at the plate. Saints’ Kevin Rockwal doubled, drove in two runs, and scored once.
St. Mary’s pitcher Quinn Powers allowed just three hits through seven complete innings. He struck out one batter and walked two.

WEST D1 BASEBALL TOURNAMENT
QUARTERFINALS
Cards deal Bombers defeat
No. 4 Pope Francis 2, No. 5 Westfield 1
The seedings held up – just barely – as Pope Francis (14-7) nipped Westfield (12-9) at Forest Park. The Cardinals advanced to the semifinals where they will take on the winner of No. 1 Central (15-5)/No. 8 Minnechaug (12-9).

WEST D3 BASEBALL TOURNAMENT
QUARTERFINALS
Tough Mountain to climb
No. 3 Monument Mountain 6, No. 6 Southwick 1
Monument Mountain (17-4) advanced to take on second-seeded Frontier (20-1) in the semifinals at Veteran’s Memorial Field in Greenfield. Southwick wraps up its season at 14-8 overall.
“We had our opportunities,” said Southwick coach Bill Dupre, whose team lost a regular season meeting to Monument in extra innings. “We didn’t quite get there.”
Monument racked up nearly a dozen hits, half of which came in the first two innings as the Mounties put together a 6-0 lead. They scored four in the first inning and two in the second.
“We didn’t go kick the ball,” coach Dupre said. “Monument just came to hit.”
Dan Burnett (2-for-3, double, run) Bart Shea (double, RBI), and Josh Sylvia (hit) led Southwick.
“Overall we had a pretty good year,” Dupre said. “Obviously it’s sad to see our seniors go … but the future’s bright.”
A total of 11 players are expected to return to the Southwick baseball team in 2019.

WEST D2 SOFTBALL TOURNAMENT
QUARTERFINALS
Rams clipped
No. 2 Hoosac Valley 6, No. 7 Southwick 5
Second-seeded Hoosac (16-3) rallied past No. 7 Southwick (15-6) to advance to the semifinals against No. 3 Wahconah (15-6). No game report was provided.