WESTFIELD – The Westfield Technical Academy boys’ soccer team has had a run for the ages, already capturing the Tri-County League title, and its second state vocational championship title in three seasons. The Tigers walked away with one more piece of history Friday night.
Sergiy Kabysh lofted a floater near the top of the penalty box high into the back of the net 30 seconds into the second half to lift third-seeded Westfield Tech past No. 6 St. Joe’s 1-0 in a MIAA West Sectional Division 4 quarterfinal thriller at Bullens Field.
Kabysh’s kick put the team into the school’s record books as it was the first time the Tigers’ boys soccer program won a league title and a state vocational championship, as well as earn a semifinal berth all in the same season.

Westfield Technical Academy celebrates after scoring the game-winning goal in the opening seconds of the second half against St. Joe’s in a West Sectional Division 4 tournament quarterfinal game Friday night at Bullens Field. (Photo by Lynn F. Boscher)

“I just had to hit it,” Kabysh said regarding his game-winner, and ninth goal of the season. “I was thinking about scoring.”
Westfield Tech (16-1-2) nearly cemented the game in the 58th minute but St. Joseph goalie Joey Maynard made an incredible save on a breakaway attempt, batting the ball away to keep the Crusaders (11-2-5) within striking distance.
Westfield Tech also had a scoring opportunity erased midway through the first half when Alex Stepanchuk dribbled past a wall of a half-dozen defenders to the corner of the field, setting up a header with a great cross. St. Joe’s prevailed.
“We didn’t have our ‘A’ game today, but we played hard enough to win,” Westfield Tech coach Kyle Dulude said. “My guys have found themselves this year and made an identity for themselves. They have a great desire to win.”
Dulude said that starts with senior leader Dominic Rosario, who was rewarded for his efforts with All-State honors for the regular season. He has extended that effort into the postseason.
“This is amazing,” Rosario said. “I can’t believe it. Coach (Dulude) has been motivating all of us. We stepped up. I can’t believe it.”
Believe it or not, Westfield Tech is moving on to Tuesday’s semifinals where it will face second-seeded Lenox (12-5-2). The site of the game has not been determined.
The Tigers are looking for a stronger effort from here on out.
“Everybody’s heads blew up (after the state vocational championship),” Rosario said. “Now it’s time to start all over again.”
Westfield Tech goalie Anatoliy Suprunchuk finished perfect on the night Friday. Suprunchuk turned away every shot – making some six saves – to earn a shutout in net.

MIAA WEST SECTIONAL DIVISION 1 QUARTERFINAL
Bombers’ semis a Dunn deal
No. 1 Westfield 1, No. 9 West Springfield 0
WESTFIELD – With 7:29 remaining in regulation Westfield High School sophomore Aidan Dunn scooped up a loose ball out in front of the West Side net, and scored. Just like that, the Bombers’ date in the West Sectional Division 1 semis was a done deal.
“I got the loose rebound and stuck it home, and it felt amazing,” said Dunn, just moments after celebrating the victory. “I couldn’t have done it without my team. It was a hard-fought battle.”
Westfield controlled the tempo of the game for the majority of the time, but could not find the back of the net.
West Springfield goalie Daniel Letendre (12 saves) turned away one shot after another. A few times, Westfield just misfired, or failed to connect.
Letendre made some acrobatic saves in the first half to keep it scoreless.
Despite not seeing a lot of action thanks to a solid defense out in front of him, Ian Saltmarsh (3 saves) matched Letendre’s effort. Saltmarsh batted away a corner kick in the 25th minute, and some 60 seconds later prevented a direct kick from causing harm.
Saltmarsh also dodged a bullet on a throw-in in the waning seconds of the first half.
Matt Butera, who recently earned first-team All-New England honors, the first the school has seen since 2000 (Mike Sullivan), tried to put Westfield out in front in the opening minutes of the second half with some fancy footwork just inside the box. Butera distributed the ball to Dunn, who launched a shot. Letendre corralled the ball for a save.
Dunn would not give up. Seeking his first goal of the season, he continued to try and work for a shot.
The effort finally paid off in the 73rd minute when Mike Visconti fired a bullet toward the West Side goal from about 20 yards out. The ball rebounded out to Dunn, who tapped it into the net.
“We had a lot of the ball and a ton of opportunities but (West Side is) a fantastic defensive team,” Westfield coach Andrew Joseph said. “They’re really, really physical and they went at us. I’m just glad for the most part that we didn’t overreact. We took it in stride.”
Westfield center-back Anthony Sullivan helped limit West Side’s chances, stopping several drives and distributing the ball to the midfielders, who, in turn, provided the forwards with several chances. 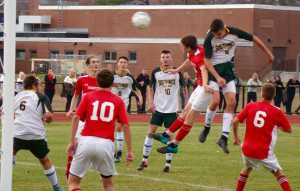 Southwick’s Tim McGrath heads game-tying goal with a header in the 36th minute against Frontier. Connor Geddis assisted on the play with a well-placed corner kick. (Photo by Chris Putz)

MIAA WEST SECTIONAL DIVISION 3 QUARTERFINAL
Frontier escapes with ‘W’
No. 5 Frontier 3, No. 4 Southwick 1
SOUTHWICK – The Southwick High School boys’ soccer team kept its goal alive for a championship run for a long period of time Friday. Unfortunately for the Rams, their hopes were dashed in the blink of an eye.
No. 5 Frontier scored two goals in a 36-second span to stun the fourth-seeded Rams 3-1 in a West Sectional Division 3 quarterfinal game Friday in Southwick.
Dillon Landry scored the game-winning goal for Frontier in the 64th minute. Thirty-six seconds later, Chad Parent knocked in an insurance goal, effectively ending the contest.
Southwick (9-3-5) failed to come back a second time.
Frontier (13-3-2) established the early lead. In the 16th minute, C Hamilton tapped in a pass from N Barnes to go up 1-0 with relative ease.
Southwick rallied when Tim McGrath converted a leaping header, knocking it past the Frontier goalie with 4:47 remaining in the first half. Connor Geddis set up the play with a well-placed corner kick.
It looked like Southwick might strike for a lead when a Frontier defender appeared to trip one Rams’ player in the box. The officials thought otherwise, and no call was made.
Southwick made a last ditch effort late in regulation, peppering Frontier with several shots, including a couple of headers that went awry.

MIAA WEST SECTIONAL DIVISION 4 QUARTERFINAL
Millionaires survive Gators
No. 2 Lenox 1, No. 7 Gateway 0 (OT)
LENOX – The second-seeded Millionaires survived another strong effort from Gateway, scoring on a penalty kick in the 85th minute to earn a semifinal berth against No. 3 Westfield Tech.
Shane Mastello (4 saves) and Brady Parker (3 saves) delivered a solid effort in net for the Gators, who won their opening round tourney contest in a thrilling shootout against Pioneer Valley Christian Academy.
“We took (Lenox) to task,” Gateway coach Tim Gamble said. “Our kids did everything we asked them to do.”
Alex Webb delivered the Gators’ best scoring opportunity late, but the shot smacked the crossbar.