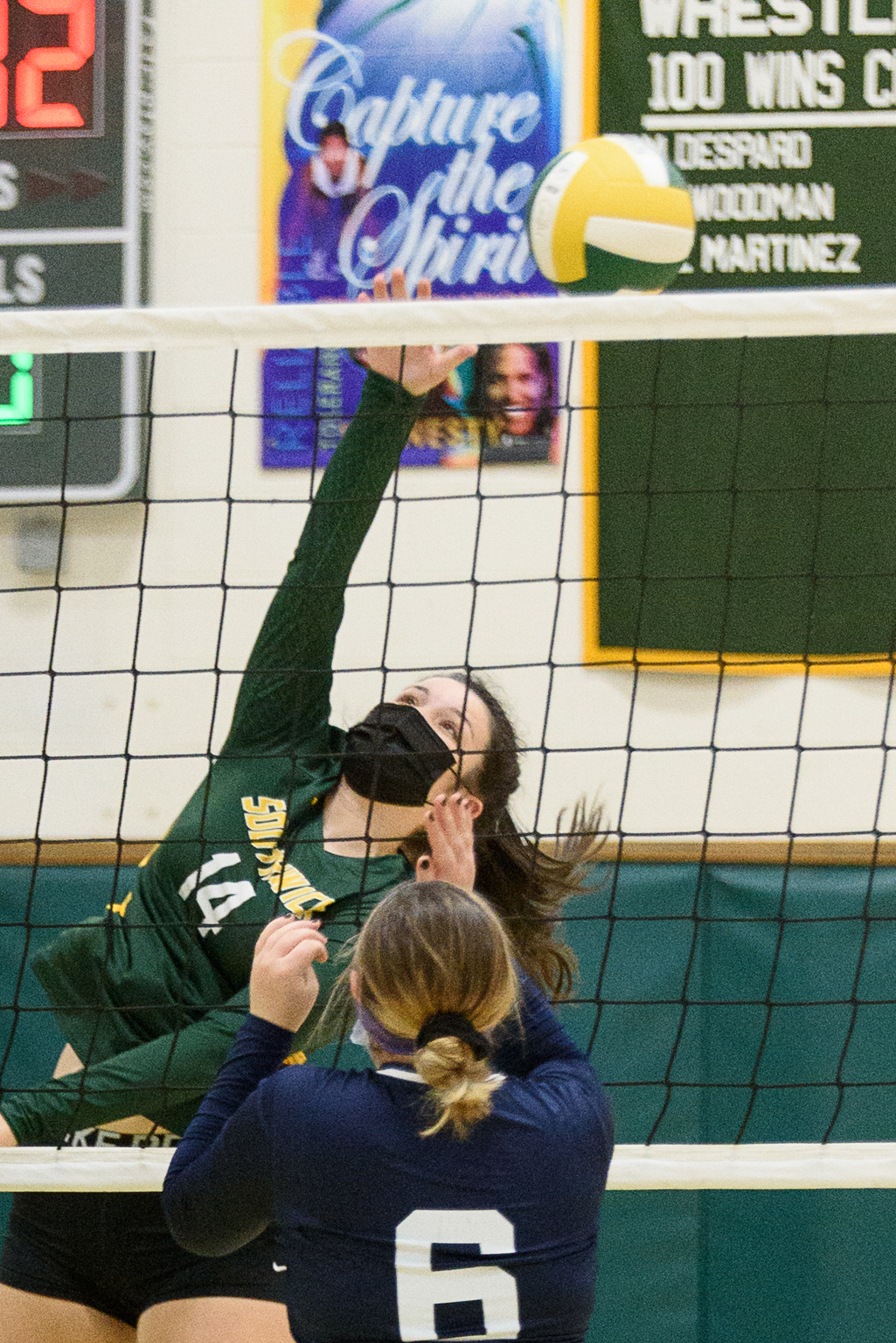 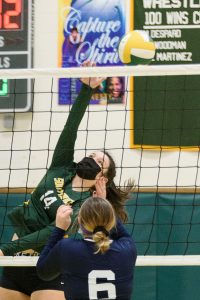 Southwick’s Emily Hanifan (14) taps one over the net against Calvary Chapel in the opening round of the state Division 5 girls volleyball tournament Wednesday night. (MARC ST.ONGE/THE WESTFIELD NEWS)

“We were in a good mood and we just swung through the whole game,” said Southwick senior libero Emily Buchter, who finished with a team-high 11 aces.
Buchter (11 aces, 1 kill, 2 digs) reeled off an absurd seven straight aces in the first set but she was far from alone in her effort.
Southwick (18-3) fell behind briefly at the outset before landing the first of several aces. Gillian Bourque (8 aces, 1 kill, 15 assists) logged an ace for the Rams’ first lead, 3-2, and landed another for a 5-2 advantage. Aces from Lina Carr (6 aces, 2 kills, 2 digs) made it 7-5 and 9-6. Later in the frame, Carr helped her team side out with a kill, kicking off the beginning of a large run.
Southwick continued to batter Calvary Chapel (10-9) with blistering serves. The Rams unleashed a hailstorm of aces. Buchter’s seven-ace barrage provided the Rams with a commanding 22-10 lead. Her teammates salted it away.
The second set featured much of the same.
Bourque collected consecutive aces to help the team land an early 5-0 lead. Buchter notched three straight aces late and Bourque had back-to-back aces a short time later to put enough distance between themselves and their opponent to cruise into the final set.
Bourque logged an ace and Southwick started off the third set up 3-0. Carr recorded two consecutive aces to help the Rams build a 6-1 lead. Two straight aces from Mia Pompi (6 aces, 3 kills, 3 digs) made it 10-3. It should have come as no surprise that Pompi would deliver three straight aces to end it.
“We came out on fire with our serves,” Southwick girls volleyball coach Kaitlyn Anthony said. “We have consistently throughout the season had a lot of aces.”
Entering Wednesday night’s competition, Carr and Bourque ranked first and second in aces, respectively, in all of Division 5. Pompi was 18th.
Southwick’s Emily Hanifan finished with three aces, five kills, and one dig.
“It feels so exciting for sure,” coach Anthony said. “It took us awhile to get here.”
The Southwick girls volleyball program began in 2007. The Rams remained a Junior Varsity squad for three years before transitioning to a Varsity team the following season. The Varsity team played an independent schedule for one year before joining league play immediately after.
One week ago, Southwick posted one of its biggest victories in the program’s history, rallying from two sets down to defeat Easthampton in an epic come-from-behind, five-set PVIAC Class C Girls Volleyball semifinals thriller. The Rams fell to top-seeded Frontier in the finals, 3-0.
Down, but still not out of the postseason, Southwick regrouped and dispatched its opponent with ease Wednesday night in the inaugural D5 state tournament.
“Once again, I am so proud of my girls,” Buchter said. “I love playing so it’s so great to get this far and to be able to win another game and go to Friday. It’s so exciting.”
Southwick advances to take on No. 3 Blackstone-Millville (15-4) in the Round of 32 Friday in Blackstone.
As to what fans can expect in their next game, Buchter offered a short preview that seems to land appropriately: “More aces. Definitely.”