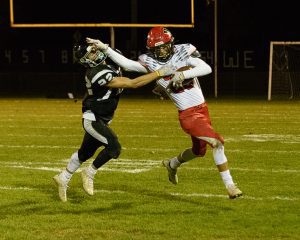 Westfield senior running back Ryan Cimini (20) stiff arms Longmeadow’s Luke Szyluk (22). Cimini and the Bombers will take on the Fitchburg Red Raiders in the opening round of the MIAA State Division 3 football tournament Friday night at Bullens Field at 7 p.m. (THE WESTFIELD NEWS FILE PHOTO)

WESTFIELD – Home sweet home. That phrase does not ring any truer for the Westfield High School football team.
No. 5 Westfield will host 12th seeded Fitchburg in the opening round of the inaugural MIAA State Division 3 football tournament Friday night. The Bombers and Red Raiders will kick off at 7 p.m.
“Earning a home on a multi-level platform is big for us,” Westfield football head coach Rob Parent said. “We don’t have to take a long bus ride … and having that added support of fans, the band, and the whole community is big. One small mistake is a big play. You would much rather have your own home crowd rallying behind you than go on the road and have the crowd against you.”
Tickets for all state tournament football games will only be available for purchase online at GoFan. Fans will be required to show this ticket on a smart phone device at time of entry. No cash tickets will be sold at the gates.
Westfield enters the postseason with a nearly perfect record of 6-1 with wins over Amherst-Pelham, Northampton, Holyoke, Minnechaug, Chicopee Comp, and Longmeadow by a combined score of 178-20. The Bombers only loss of the season came against the fifth-ranked team in Division 1, the Central Golden Eagles, 20-6.
Fitchburg comes into the contest with a 5-2 mark.
“This is going to play out like most playoff games – – who can control the clock and minimize bad plays,” coach Parent said. “That is certainly where the game is going to be won or lost.”
According to Parent, Fitchburg plays a very physical brand of football led by senior running back Anthony Oquendo, a 5-foot, 8-inch, 195-pound bowling ball of a runner who has racked up 1,250 yards and 19 touchdowns on 110 carries, including several 50-plus yard scores.
“He will be the best running back we have faced all year,” coach Parent stated. “He has a low center of gravity with a build like (former Jacksonville Jaguars All-Pro running back) Maurice Jones-Drew and is fast.”
Much like Westfield freshman quarterback Jaxson St. Pierre, who took over after senior running back suffered a season-ending injury against Central, Fitchburg’s starting quarterback is a “dynamic” signal-caller who can both throw and run.
“It will be another element for us to contend with,” Parent said.
This game like many others will also likely be decided in the trenches. According to coach Parent, Fitchburg’s front seven has size and all-around talent. “They are a lot like Minnechaug – – very good everywhere,” he said.
On the flip side, Westfield’s offensive line has created several holes for senior running back Ryan Cimini and freshman RB Lucas Guay all season long and given its quarterback time to find wide receivers like Andrew Scott and twin brothers Michael and Matthew Collins. The Bombers defensive line has often created havoc for opposing quarterbacks and their respective backfields as well.
As far as the tournament seedings are concerned, the Bombers head coach said he felt that Western Massachusetts football teams were slightly underseeded, including his own, but also noted that area teams have to create a constant culture of winning to sway people’s opinions on the other side of the state.
“Looking at the teams ahead of us, I still think the east is weighted differently than the west,” Parent said, “but the west hasn’t done anything to change that mentality. The fifth seed is fair. I think it shook out fine. The opportunity is in front of us. Friday night, we have to make the best of that opportunity.”