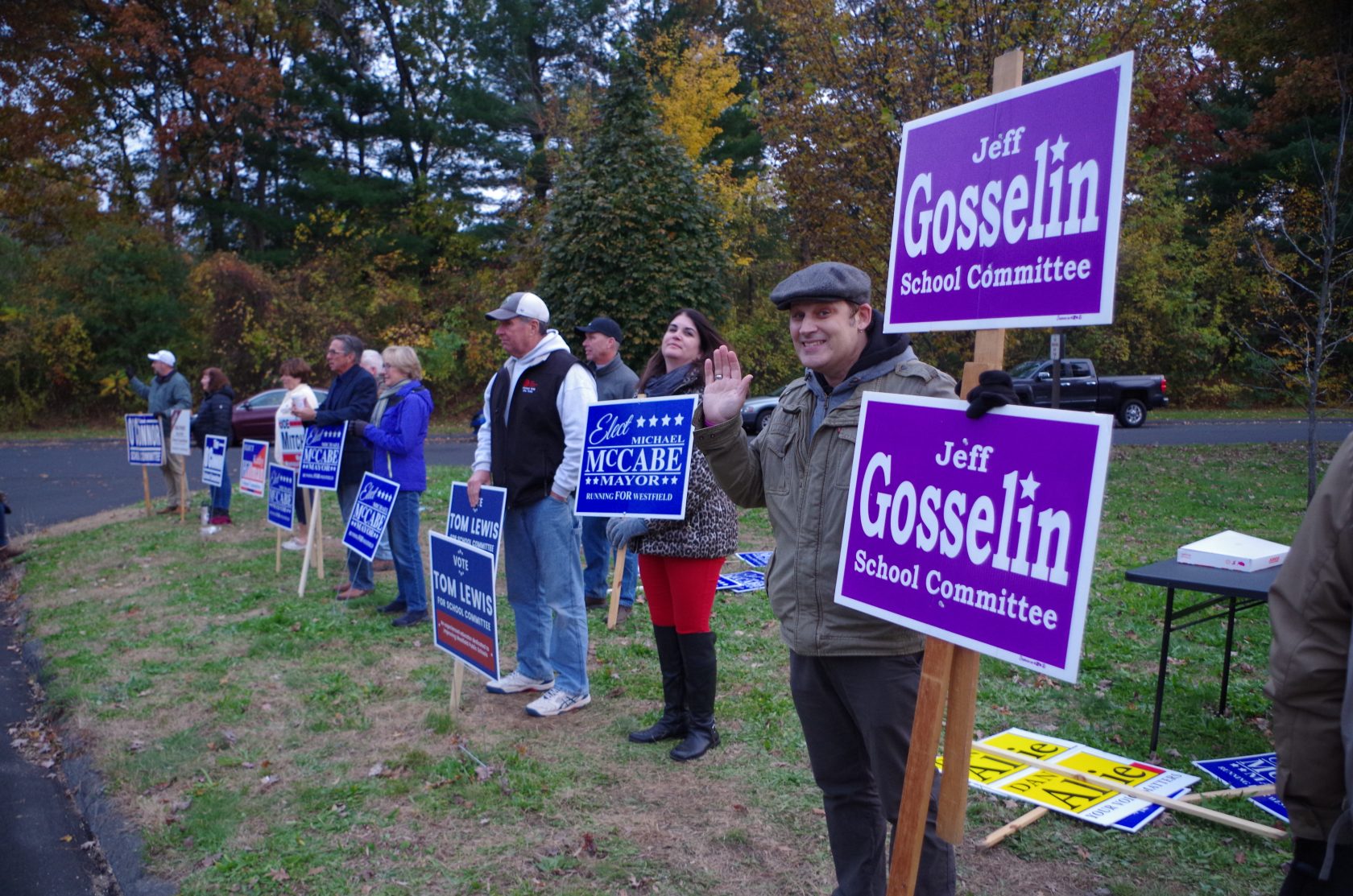 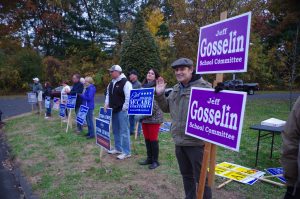 Jeffrey Gosselin waves to voters outside Munger Hill School on Nov. 2. Gosselin was unsuccessful in his bid to return to the School Committee. (MICHAEL BALLWAY/THE WESTFIELD NEWS)

WESTFIELD — Two incumbents and a first-time School Committee member were elected on Nov. 2, just as the bond order request for $61,259,139 for a new elementary school, the biggest project in decades roughly half of which will be reimbursed by the state, heads to the City Council on Nov. 4.

Kathleen Hillman, an educator for 30 years and president of the West Springfield teachers’ union for 14 years, will join incumbents Timothy O’Connor and Heather Sullivan, who led the field of six candidates for the four-year seats on the Nov. 2 citywide ballot. They will join Ramon Diaz Jr., Diane Mayhew and Bo Sullivan, who have another two years left on their four-year terms.

O’Connor, the leading vote-getter of the night and current vice chair of the committee, expressed his gratitude to voters.

“I am humbled by the support and confidence the Westfield community has entrusted in me to continue to serve as a member of the Westfield School Committee. I do appreciate the interest of all candidates on the ballot and thank them for their effort to serve the same. I will continue to work hard to make the Westfield public school system a system that serves the needs of all students. Together we can make a difference, thank you,” he wrote, following the election.

Sullivan was also grateful for a chance to serve for another four years.

“I am so happy to have the opportunity to serve on the committee for the next four years. A heart-felt thank you to everyone who supported me, I am overwhelmed by our success! Thank you so much! I am going to miss having Cindy with us, but I know she will continue to be a voice for the students of Westfield. And a huge congratulations to Kathy Hillman, welcome! Looking forward to working with you!” she wrote, referring to her colleague Cindy Sullivan, who declined to run again after serving three terms over the past 12 years.

Hillman said she is excited to serve in Westfield. “I am so excited to be elected to the School Committee! I even did the happy dance. Creating the best learning and working conditions for all of Westfield’s education community will be my top priority. I want to thank all of my friends and family who encouraged me to run. Public service is truly a wonderful gift.”

Former School Committee member Jeffrey L. Gosselin, who sought to regain his seat in the election, also thanked his supporters.

“I want to congratulate all who won in yesterday’s race,” she wrote on Wednesday morning. “I do pray that they make positive decisions for our students and their families. Now, I want to thank all those who voted for me, who put up signs in their yards for me and who came out early on Saturday mornings to campaign with me. I think we brought awareness to some very important issues facing our schools.”

Tom Lewis also shared his thoughts on the campaign.

“I think it was a hard-fought campaign,” he said. “I am very proud of the issues that I raised and hope they have raised the level of debate in Westfield. Our children deserve more than they are receiving, and I hope the issues continue to get discussed. I congratulate those who were elected. Especially looking forward to the leadership of Mayor-elect Mike McCabe. We need his energy as a change agent. I would like to thank everyone who supported me and look forward to continuing the discussion for the future.”

The two incumbents were the top vote-getters in the six-way race. O’Connor earned 4,429 votes city-wide, with Sullivan garnering 4,349. A gulf of nearly 2,000 votes separated the incumbents from the four challengers, but fewer than 200 votes separated them from each other, as Hillman was elected with 2,472 votes, followed by Tom Lewis with 2,389, Breton with 2,342 and Gosselin with 2,275.

The new term begins in January. Hillman will not be the only new member of the School Committee, as Michael McCabe, as part of his duties as Westfield’s new mayor, will take over from current Mayor Donald Humason Jr. as chair. McCabe defeated Humason 4,714 votes to 3,846 at the top of the ballot on Tuesday.