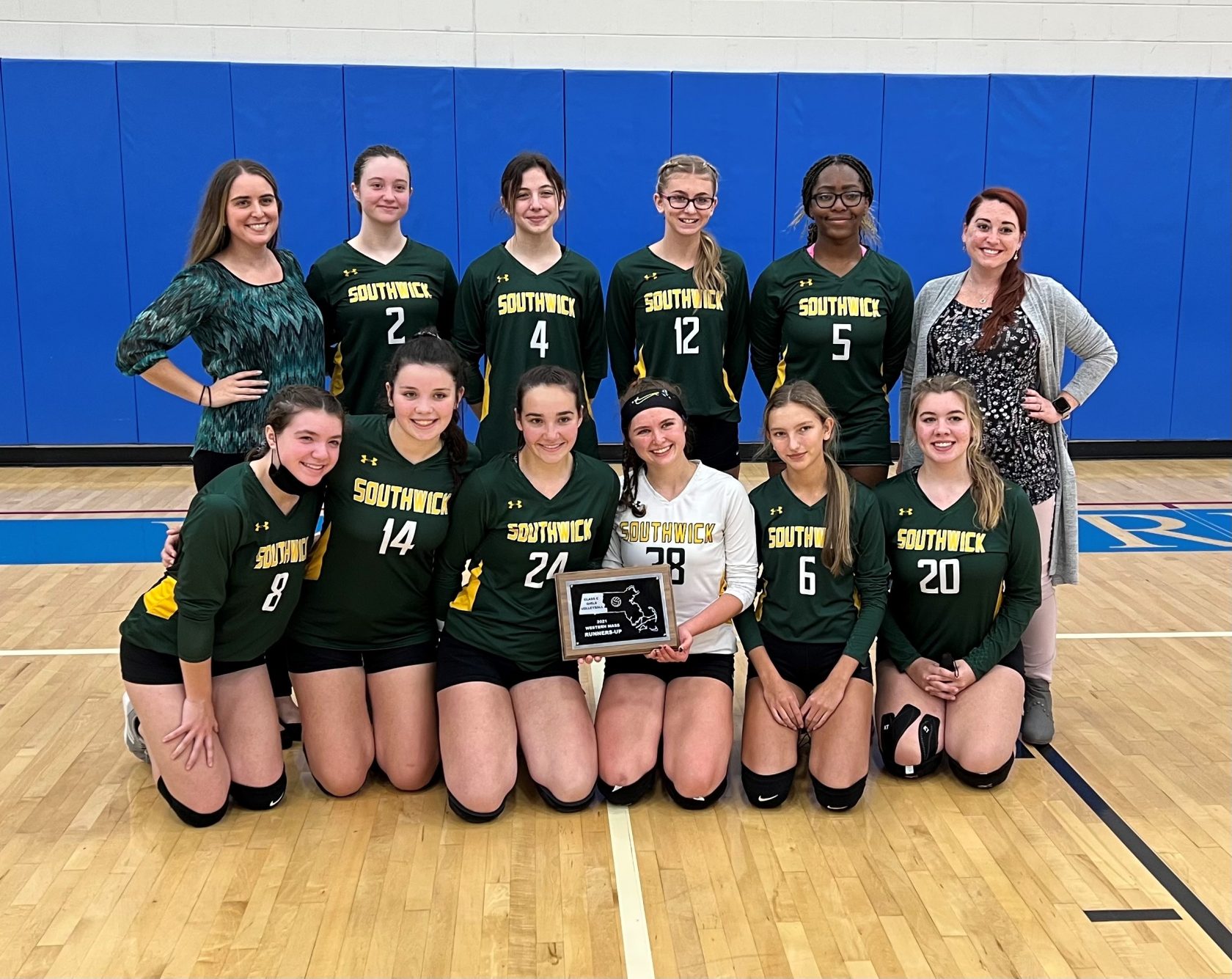 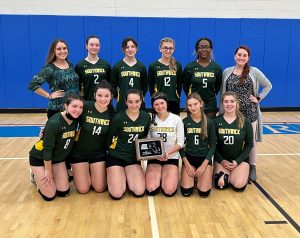 UPDATED 10/31
WESTFIELD – Although the Southwick Regional High School girls volleyball team lost in its first-ever championship appearance, nobody should fault the Rams if they are still on cloud nine.
No. 3 Southwick rose to lofty new heights, rallying from a 2-sets-to-none deficit in the PVIAC Class C Girls Volleyball semifinals to complete an epic come-from-behind victory in five sets on the road at second-seeded Easthampton on Thursday.
On Saturday, Southwick ran into a traditional favorite. Top-seeded Frontier put together another quality effort, sweeping the Rams 25-13, 25-15, 25-12 to win the Class C championship at West Springfield High School.
“I think the clincher was we’re not used to seeing a lot of jump-float serves,” Southwick girls volleyball head coach Kaitlyn Anthony said. “It was very hard to get a serve-receive so you get in these ruts.”
Frontier went to work right from the outset, building a 19-5 lead on the back of 10 straight serves from senior Lilah Evans. The 11-0 run put Southwick in a deep hole early. Some strong serves from Lina Carr (2 aces, 3 kills, 5 digs) nearly cut the Rams’ deficit to single digits but the Red Hawks remained steady late.
Southwick fell behind again early in the second set but rallied to force a 9-9 tie – – its first since 4-4 in the opening frame – – and again at 10-all. Frontier junior Eve Dougan delivered some strong serves, including two aces to put the Red Hawks in front 17-11.
After a side-out, Carr slipped an ace past Frontier. Southwick soon cut the score to 17-15 but the Red Hawks regained possession and reeled off eight straight with junior Sydney Scanlon (19 aces) serving to close out the set. Two of the team’s points came off wicked kills from junior captain Jillian Apanell.
Down but not yet out, Southwick scrapped and clawed for every point. Junior Gillian Bourque (2 aces, 2 kills, 7 assists, 3 digs) landed an ace to give the Rams their first lead in the title game, 1-0. Junior Emily Hanifan (1 ace, 3 kills, 1 block, 4 digs) netted a block to give her team a 3-2 advantage.
Southwick led again at 5-4 but the lead would prove to be fleeting. Frontier caught steam and never looked back. The Red Hawks scored the game’s final nine points, including three straight aces from sophomore Caroline Deane to end it.
“We always said in the beginning no matter if we won or lost we would just be happy,” Southwick senior Mia Pompi said. “Our whole school is happy that we made it to this point because it is history for Southwick volleyball.
Senior libero Emily Buchter agreed.
“I’m so proud of our team,” Buchter said. “We worked so hard. We got all the way here. It really just means so much to even get this far…. This was amazing.”
Pompi collected one ace, one assist and six digs. Buchter also had six digs. Both seniors are six-year players.
Aniya Kamara finished with one kill and three digs for Southwick.