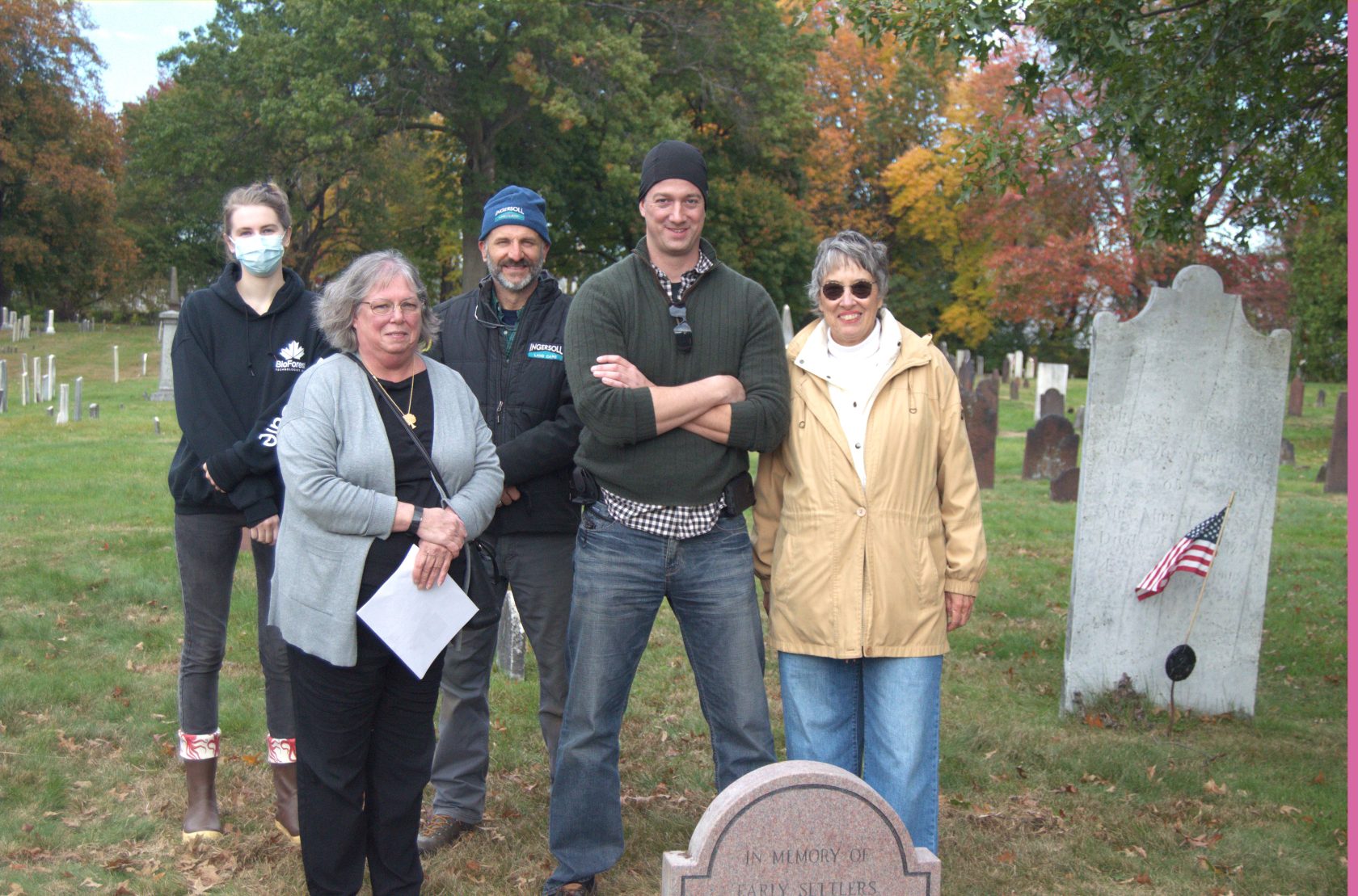 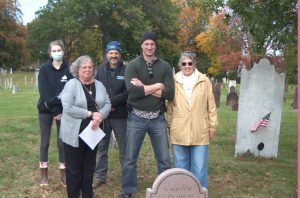 WESTFIELD — John Ingersoll, one of the 13 founding members of the original settlement of Westfield, was honored with a new gravestone Oct. 29 in the Old Burying Ground, after his original marker was lost to time.

The installation of a new stone for Ingersoll is the culmination of an eight-year effort on the part of some of his descendants, some 337 years after he died. Karen Kaier an 11th-generation descendant of John Ingersoll, said that she undertook this effort in part as a member of the New York chapter of the Daughters of the American Revolution, a group that aims to preserve and maintain the historical records of American revolutionaries and early settlers. Her son, Scott Kaier, is the 12th generation descendent and is a member of the Sons of the American Revolution.

Karen Kaier first came to the Old Burying Ground seven years ago, where she and the late Historical Commission Chair Bob Dewey surveyed the grounds with divining rods to determine the possible location of Ingersoll’s grave. They believe they found it next to the gravestone of Ingersoll’s grandson, Thomas Ingersoll.

The new stone was made by Smith Monuments on Court Street, and was installed next to Thomas Ingersoll’s grave.

The stone also includes the name of Mary Webster Hunt, Ingersoll’s third wife, who was born in 1640 and died in 1690. 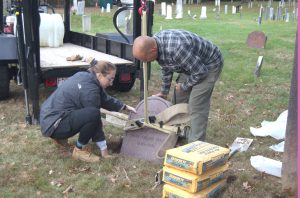 Emily Dumala, left, and her father David Dumala, of Smith Monuments, carefully lower the new stone into its spot before filling the hole with cement, dirt and grass to keep it in place. (PETER CURRIER/THE WESTFIELD NEWS)

John Ingersoll lived from 1615 to 1684. He was a farmer, as were most of the other 13 settlers who came from Northampton to establish a settlement in Westfield. He was married three times, and fathered 15 children, making it likely that he has more unknown direct descendants.

Ingersoll also founded the First Congregational Church in Westfield. During the installation of his new gravestone, Julie Olmstead, the 20th pastor in the church’s history, led a prayer that focused on celebrating one’s ancestors and acknowledging the traits and values that were instilled by one’s parents and grandparents.

“We keep our ancestors alive through good stewardship and memories,” said Olmstead.

Descendants helped lay a new gravestone for Westfield settler John Ingersoll, who died in 1684, and his wife Mary Webster Hunt, who died in 1690, at the Old Burying Ground. (PETER CURRIER/THE WESTFIELD NEWS)

She also celebrated the Old Burying Ground itself, which has the graves of most of the most influential residents in Westfield’s history.

“In the last seven years, the cemetery has had a complete renaissance and resurrection,” said Olmstead.

It was originally intended for the new stone to be installed much earlier, but the project faced multiple delays. Smith Monuments, which created and installed the stone, was purchased during that time, which caused a delay of the installation. Then the COVID-19 pandemic complicated the process further, as a ceremony was unable to take place through most of the last year and a half.