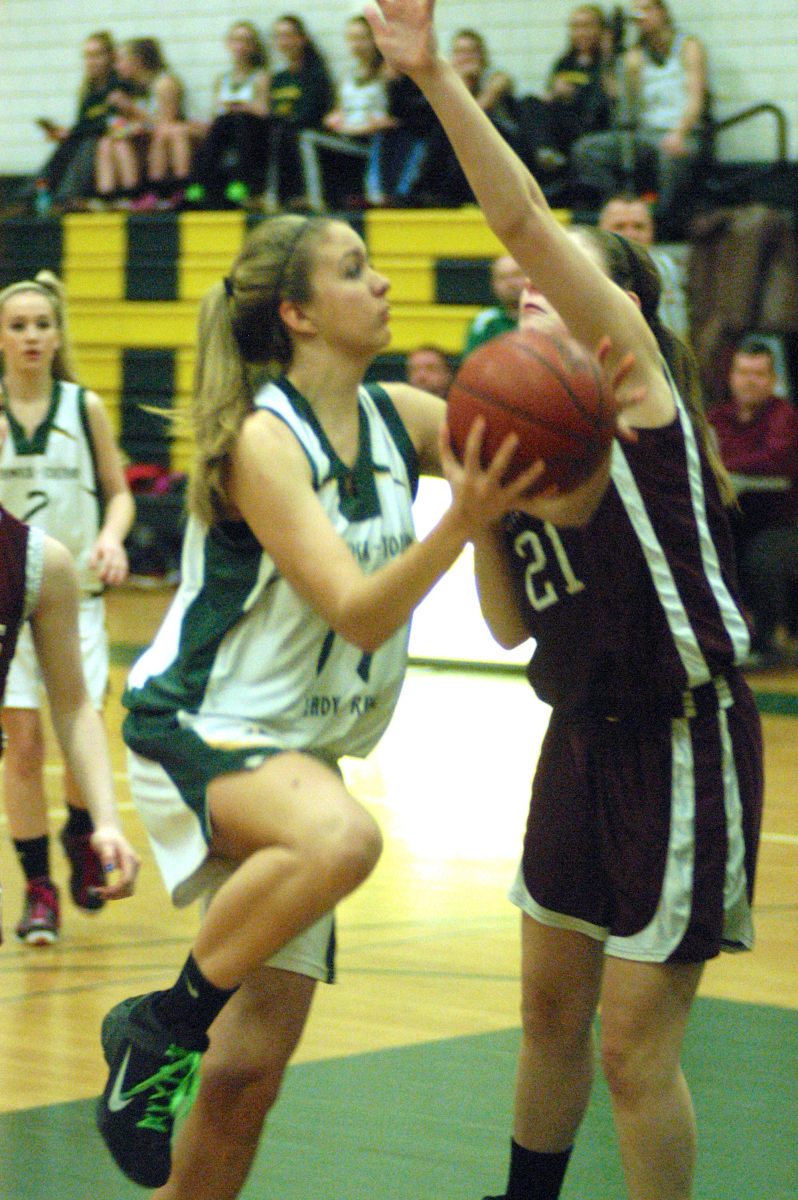 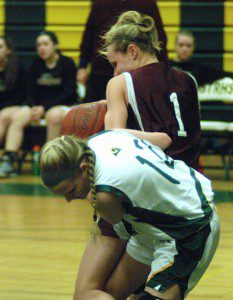 The Rams attempt to wrestle the ball away from Easthampton in a high school girls’ basketball game Friday night in Southwick. (Photo by Chris Putz)

SOUTHWICK – Southwick-Tolland Regional High School girls’ basketball coach Mike Gill chose to implore the famous words of New England Patriots coach Bill Belichick (“Do Your Job”), and on Friday night the Rams took those instructions to heart.
“They did what we wanted,” Southwick assistant coach Rick Harriman said.
Southwick established an early advantage against visiting Easthampton, built a 26-13 lead at the half, and cruised to a 43-25 victory.
While Morgan Harriman led Southwick (14-4) with 17 points, the Rams distributed the ball evenly to several other players. Haley Parker and Monica Kucienski combined for nearly 20 rebounds. Taylor Leclair and Ashley Shea teamed up for more than a dozen assists. 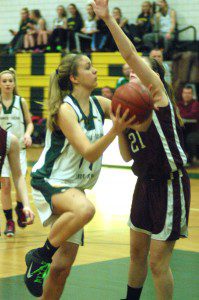 BOYS’ HOOPS
Bombers edge Blue Devils
Westfield 70, Northampton 68
Isaiah Headley scored a team-high 21 points, including two free throws with 4.5 seconds left to lift Westfield Friday night in front of a raucous crowd of some 500 in attendance.
Headley poured in 16 second-half points after being sidelined with foul trouble in the first half.
Westfield’s Manny Golob and Richie Barnett finished with 10 points apiece, and John O’Brien and Nick Hall each had nine.
O’Brien and teammate Aric Laplante managed to silence Northampton’s Aidan Hirsch, who exploded for 37 points, late in the game.
Hirsch put together a 24-point, second-quarter outburst, but scored just 10 points in the second half. O’Brien and Laplante held Hirsch to just one field goal in the final 12 minutes.
“We had a little more balance tonight,” Westfield coach Bill Daley said. “(Northampton) battled their asses off. I tip my hat to them. We just executed better than them at the end.”

Catholic runs past Saints
Holyoke Catholic 78, St. Mary’s 43
Drew Collins (13 points) and Steve McKenna (10) notched double-digit scoring efforts for St. Mary. Nick Garde (9), Jake Butler (6), and Andrew Illnicky (5) also contributed on the Saints’ offensive side of things.
“We played pretty hard,” St. Mary coach Joe Molta said. “We scored a good amount of points, but the second quarter was tough.”
Holyoke Catholic went on a 37-5 second quarter run.
“That was the difference,” Molta explained. “The other three quarters we played right with them.”

Tigers eliminated
Franklin Tech 81, Westfield Voc-Tech 63
Westfield Voc-Tech’s tournament hopes were dashed by Franklin Tech, who eliminated the Tigers from postseason contention Friday night.
Franklin Tech raced out a big halftime lead, 42-25, before Voc-Tech posted a third quarter rally (scoring 26 points), climbing back to within three points of a tie before Connor Hebda and Matt Wood fouled out.
Andre Fillion hit a 3-pointer for Voc-Tech, his first points of the season.
“Everyone now has scored for us this year, and whenever we have found ourselves down in a game we never quit and always played hard to the end,” Voc-Tech coach Kyle Dulude said.
“We have suffered a lot of injuries,” said Dulude, noting that just eight players remain from opening day. “They are playing with a lot of pride and have nothing to hang their heads about.”