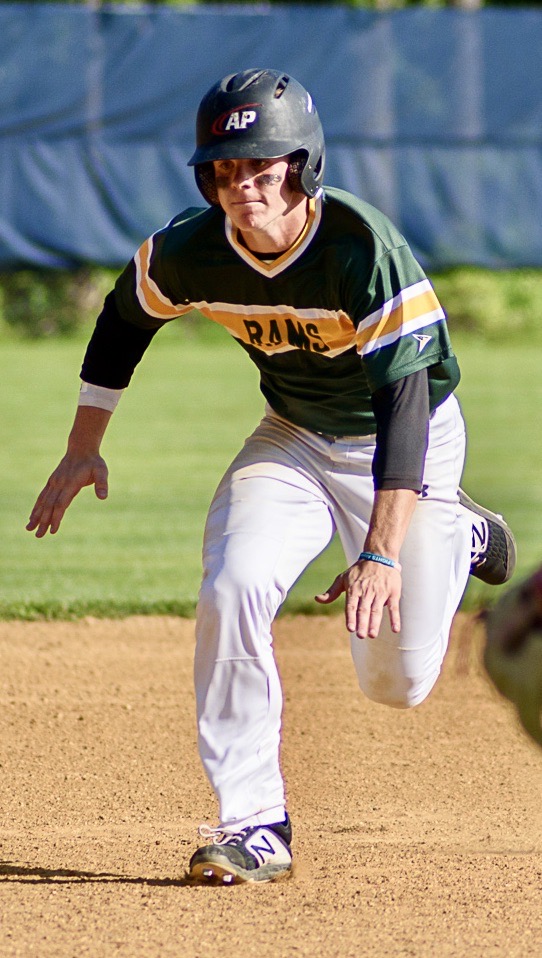 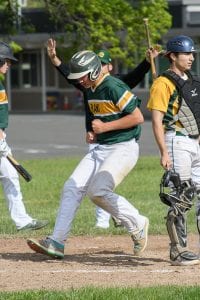 SOUTHWICK – Dan Burnett. Josh Lis. Dalton Bessette. Nick Ensign. Dominic Vercellone. Zach Karetka. Frank Wynglarz.
These are the names of seven Southwick-Tolland-Granville Regional High School student-athletes, who will best be remembered in the eyes of Rams varsity baseball head coach Bill Dupre for their standard in excellence and continued rise to prominence.
As a team, these seven ball players fell just one game short of a championship appearance a year ago and were preparing to take the next step this year when the spring season was canceled to coronavirus concerns.
“We held out hope, but the players kind of knew there would be no spring sports,” coach Dupre said. “They all took it kind of in stride.” 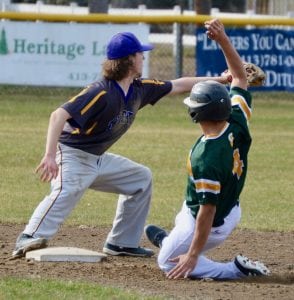 Southwick’s Dalton Bessette, right, attempts to beat the throw at second base against Westfield Technical Academy in 2018. (THE WESTFIELD NEWS FILE PHOTO)

Tournament hopes were high. In 2019, Southwick fell to eventual Division 3 champion Taconic in the semifinals. The Braves were not your typical D2 representative either, having forged a formidable squad through the ranks as Little Leaguers and Babe Ruthers before upending Westfield a few years ago to claim the Division 1 title before dropping down a division.
“We were looking at a deep playoff run again,” coach Dupre said, “but we couldn’t play because the world stopped.” 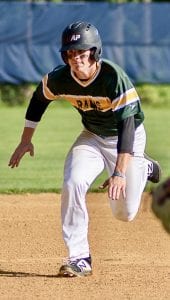 Southwick’s battery was charged to the max with ace Josh Lis, who is soon bound for baseball at American International College, and third-year starting catcher Dalton Bessette behind the plate.
Southwick was also relying heavily on the services of Burnett, who will be attending University of Hartford on a D1 baseball scholarship, and a half-dozen other solid seniors.
Also, not to be forgotten, was the team’s chief statistician, senior David Ziba.
“Expectations were pretty high,” coach Dupre said, noting Burnett and Lis’s participation since freshman year. “They’ve been building to be this group for the last couple years. …We wish we were playing in the tournament right about now.”
As underclassmen, this group of Southwick ball players won a key game against Athol. Last year, the Rams advanced to the semis before losing to the Taconic Braves.
“We were pretty excited about this group; we had a lot of talent,” coach Dupre said. “They had soccer, they had basketball, but they all look forward to baseball. They feel like they definitely missed out, but they understood. …Not that we won’t be excited about next year, but it will be unknown.”
Coach Dupre applauded his senior class and said although they will be moving on, there is an open invitation for each one of them to return.
“These seniors have done nothing but represented Southwick in the best way,” the Rams head coach explained. “I wish them good luck, but seniors are always a part of this program. They can come back and watch some games, or hit fly balls in practice. They are always welcome.”