ATHOL – The Southwick High School girls’ basketball team’s run came to a crashing halt on the road Tuesday but for the Rams, it was one heck of a ride.
“We actually played a good game, but we just got ourselves dug into a deep hole,” Southwick assistant coach Rick Harriman said of his 11th-seeded Rams, who fell to No. 6 Athol in a Western Massachusetts Division 3 opening round tournament game.
Athol race out to a 22-6 first-quarter lead, and never wavered.
“We weren’t able to recover from that,” coach Harriman said.
Emily Casella paced Athol with a 20-point effort. Morgan Harriman and Ashley Shea led Southwick with 13 and 11 points, respectively. Rams’ McKinley White finished with eight.
“This was another step for Southwick basketball,” coach Harriman explained.
Southwick, who finished the regular season with a 16-4 record, has struggled to gain an identity since the heydays of the late 80s/early 90s when Rebecca Lobo graced the local courts.
More recently, Southwick has had to fight the defection of young, talented basketball players to travel teams and prep schools, and even the lack of participation to some degree.
Mike Gill is the current head coach. Gill has often deferred to Rick Harriman for comment over the course of the last two years. Rick’s daughter, Morgan, was one of several key members of the 2014-15 team.
“This year was another step for Southwick basketball,” coach Harriman said. “We’re looking year-to-year to improve, then go deeper into the playoffs, and put Southwick back on the map.”
The St. Mary High School girls’ basketball team was also victimized on the road by a tough opponent Tuesday. The second-seeded Ware Indians tripped up the No. 15 Saints, 54-16. 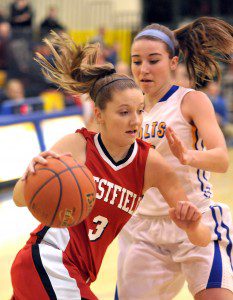 Alicia Arnold handles the ball for Westfield in this photo from the 2013-14 regular season. Arnold, and others, such as Karly Mastello and Alexa Morin, will be critical to the Bombers’ success this postseason. (Photo by Frederick Gore)

RETURN TO ACTION: The Whip City’s female contingent of basketball stars will have another chance to advance this postseason when No. 5 Westfield (13-7) travels to No. 4 Shepherd Hill (14-6) Friday. The two teams tip off at 7 p.m.
First up though for Westfield High School is a boys’ basketball tournament game between the fifth-seeded Bombers (13-7) and host No. 4 Leominster (16-4) Wednesday night at 7 p.m.
Also Wednesday night, the defending champion Westfield High School boys’ ice hockey team will open defense of their Western Massachusetts Division 3 championship crown with a game against fourth-seeded Minnechaug (11-8).
The two teams will face off at the Olympia Ice Center in West Springfield, beginning at 8 p.m.
Westfield finished the regular season with a record of 13-4-3.
In other games, the Cathedral High girls’ ice hockey team travels to Rockland to take on No. 11 Notre Dame Wednesday at 5:40 p.m. The Panthers (10-8-2), who feature a few prominent Westfield High female ice hockey players, are seeded 22nd.
“(Notre Dame is) a phenomenal opponent from top to bottom – they’re going to be tough to defeat,” Cathedral (WHS Co-Op) assistant coach Dave Pelletier said. “It’s going to be a tough one to pull off. I would not be surprised to see them in the Final Four.”
Pelletier said there are similarities in the two teams, especially their willingness to challenge themselves throughout the season.
“They play a tough schedule as do we,” Pelletier said. “My hat goes off to teams who go out of their way to play tough teams in the state.”