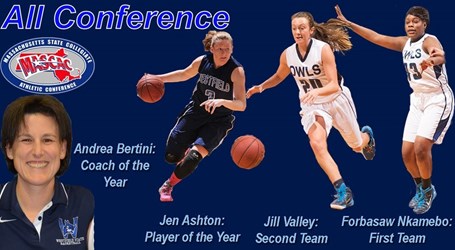 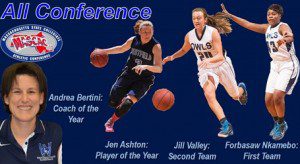 WESTFIELD – Westfield State University’s Jen Ashton was named the 2015 Massachusetts State Collegiate Athletics Conference women’s basketball player of the year to headline four Owls who earned league honors on Wednesday.
Ashton is one of three Owls to earn all-conference honors. She’s joined on the first team by junior center Forbasaw Nkamebo (Amherst/Amherst, Mass.) and sophomore guard Jill Valley (Mahar/Orange, Mass.) was named to the second team. Westfield State head coach Andrea Bertini, a 1996 Westfield State grad and a native of Salem, Mass., was chosen as the league’s coach of the year
Ashton leads the Owls in scoring at 15.1 points per game, in assists with 5.7 assists per game, and steals with 3.8 steals per game. She’s also grabbing 5.9 rebounds per game. (See related story). She was a first team selection in 2013 and 2014 as well and the league’s rookie of the year and a second team pick in 2012.
Nkamebo is second on the Owls with 14.7 points per game and leads the Owls with 9.9 rebounds per game. A 5-10 center, she leads the league in field goal percentage (.550) and ranks in the top five in both points and rebounds.
“‘Forbes’ is a great combination of speed and strength,” said Bertini. “I don’t think the league has seen a player like her in a long time. She rebounds very well, she knows how to move without the ball and is fast enough to beat guards down the floor and get layups.”
Valley, a 5-4 guard, has had a breakout season for the Owls she’s second in the league in field goal percentage (thanks to a number of her buckets coming on transition layups) ranks eighth in the league in scoring at 12.3 points per game, hands out 2.9 assists per game and gathers 2.0 steals per game as a key cog in Westfield’s pressure defense.
“Jill came in in great shape. More fit and healthy this year,” said Bertini. “We could see her athleticism taking over in practice and she jumped on every opportunity she was given.”
Bertini has led the Westfield State to a 21-4 regular season record, including a 12-0 mark in the league, and the Owls will take a school-record 15-game winning streak into the MASCAC semifinals, which Westfield will host on Thursday at 5:30 p.m.
Bertini was chosen as the league’s coach of the year for the fourth time. She won the award in 2009, 2011 and 2014 as well.