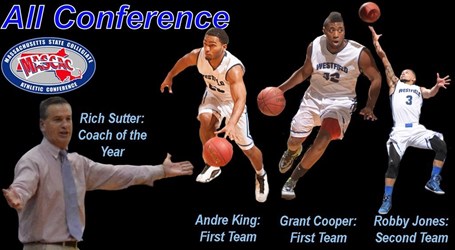 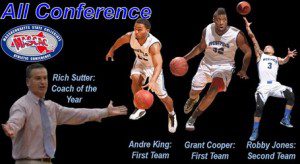 WESTFIELD – Westfield State seniors Grant Cooper, Andre King and Robby Jones have earned Massachusetts State Collegiate Athletic Conference men’s basketball all-league honors, while the Owls’ coach, Rich Sutter, earned the MASCAC’s coach of the year award.
Cooper and King were named to the first team, while Jones was picked for the second-team, as selected by a vote of the league’s coaches.
Cooper, a 6-2 forward, leads the Owls in scoring (16.6 ppg) and rebounding (8.7 rpg), and averages three steals and two assists per game. He ranks second in the league in scoring, third in rebounds, third in assists and fourth in steals per game.
“Cooper is a whirling dervish on the floor,” said Sutter. “His intensity always leads him to the hoop, and has a nose for the action. I have no problem saying that he is the best player that I have coached here at Westfield.”
His 1384 career points rank eighth all-time at Westfield, his 738 rebounds are fifth all-time at the school, and he’s third all-time in both assists and steals.
Cooper is a repeat selection on the first team from 2014, and he was named the circuit’s rookie of the year as a freshman in 2012.
King is a 6-0 point guard who transferred from Division II St. Anselm College to play his senior season at Westfield. He stepped right into the Owls lineup and averaged 15.6 points per game, shooting a deadly 42 percent from three-point range, and leads the team with 3.2 assists per game. He leads the league in 3-point field goal percentage, ranks second in assists and third in scoring.
“Andre is a quiet storm,” said Sutter. “He is reserved, but ultra-competitive and has the ability to stay calm in tight situations.”
King’s 83 percent shooting from the foul line has been a key factor in the Owls closing out their opponents late in games this year.
Jones, a 5-9 guard, is averaging 11.3 points per game and leads the Owls with 51 steals. He had an explosive finish to the season, scoring 19, 20 and 22 points in the three of the Owls last five games, and was at his best in conference play where he scored nearly 14 points per game.
“Robby’s play has been the biggest surprise for me this year,” said Sutter. “Cooper was a known entity, and I had seen Andre play enough to know what we were getting. But Robby’s play has been one of the main factors in leading us to the regular season title. His speed is his best skill – he’s so fast with the ball – but he can also shoot the ball and that is what keeps defenders honest when they play him.”
Sutter earned the league’s coach of the year award for the third time. He won in 2003 and 2006. This year, he has led the Owls to an 18-6 overall record and an 11-1 mark in the MASCAC, winning the league’s regular season crown and earning the top seed in this week’s conference tournament.
The Owls will host fourth-seeded Salem State on Thursday at 7:30 p.m. at the Woodward Center.