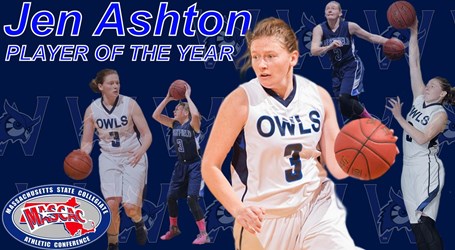 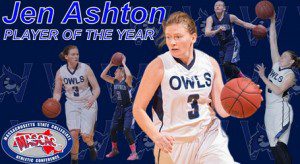 WESTFIELD – Westfield State senior guard Jen Ashton (Beverly/Beverly, Mass.) has been named the 2015 Massachusetts State Collegiate Athletic Conference women’s basketball player of the year.
Ashton leads the Owls in scoring at 15.1 points per game, in assists with 5.7 assists per game, and steals with 3.8 steals per game. She’s also grabbing 5.9 rebounds per game.
“I think that this is a really hard-earned, and well deserved honor for Jen,” said Westfield State head coach Andrea Bertini. “Having watched her all season, and particularly in MASCAC play, I am really happy that the other coaches in the league felt the same way in voting her as player of the year.”
Ashton has led the Owls to a 21-4 overall record, a perfect 12-0 record in the MASCAC regular season, and the top seed in this week’s MASCAC tournament. Westfield is riding a school-record 15 game win streak, and The Owls will host fourth-seeded Framingham State in the semifinals on Thursday at the Woodward Center.
Ashton already ranks among the Owls all-time greats. She is third in career scoring with 1,434 points, holds the school record for career steals (which she broke as a junior) with 224, and is second all-time in assists with 570.
“She is really good at a lot of things,” said Bertini. “She is a very complete basketball player.”
In this senior season, she has a game of 30 points (against Salem on Jan. 17); three games with 11 or more rebounds; and tied the school record with 13 assists in a game at Framingham State on January 8. She’s an 82 percent free throw shooter, and leads the team with 26 made three-point field goals.
Among active NCAA Division III players Ashton is first in career steals and second in assists.
“Jen impacts the game in a lot of ways, and not just with statistics. She’s a leader. She plays with a sense of urgency and imparts that to her team – they want to match her sense of urgency and play the same way. Not only does Jen play that way – she practices that way and has since her freshman year.”
“She understands the game better than any player I have coached here,” said Bertini. “She interprets situations quickly, and does just what we need – whether it is score the ball, get a big rebound, or find an open shot for a teammate. If she’s not the best passer who has played at Westfield State, she’s pretty darn close, and we have some Hall of Famers.”