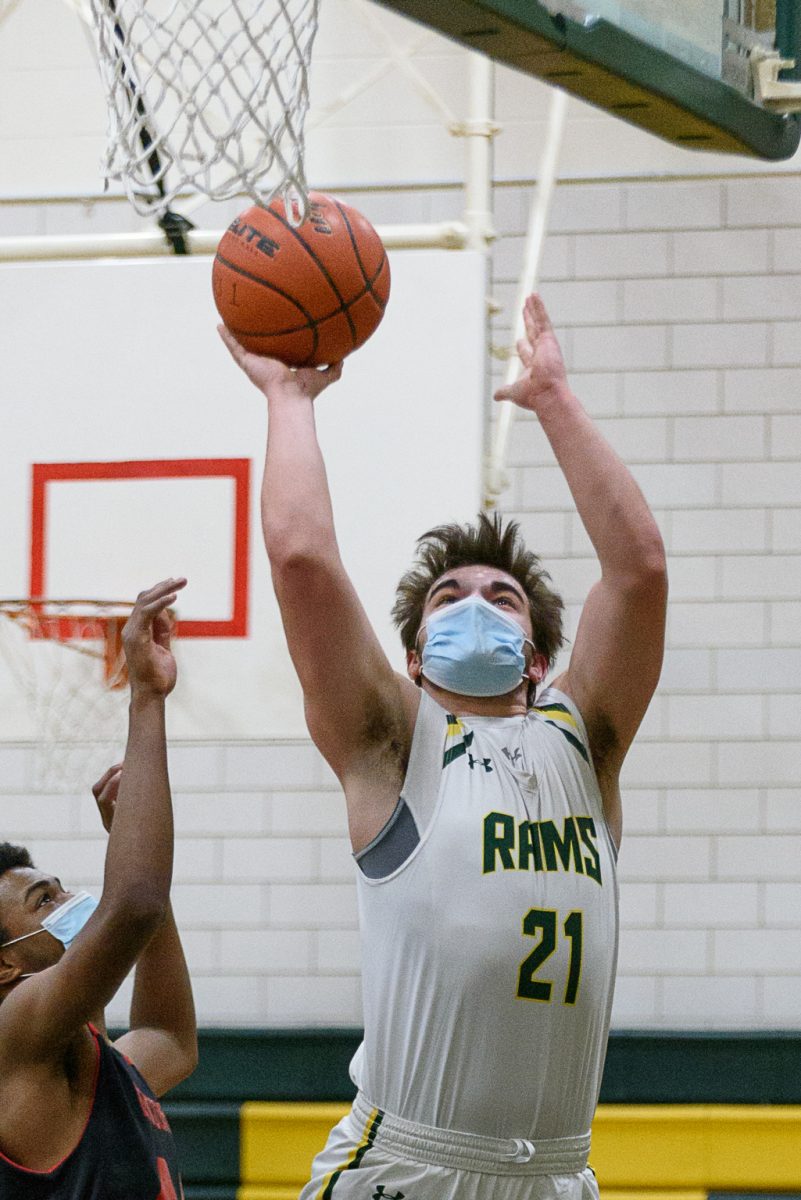 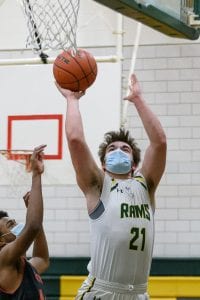 SOUTHWICK – The Southwick Regional High School boys basketball team continued to shake off the rust following a lengthy delay to the 2021 season, and in the process left their most recent opponent in a cloud of dust.
Southwick upended Pioneer Valley Chinese Immersion Charter School 60-27 Friday night at home.
“We are getting a little familiar with the rims, shots started kind of falling,” said Southwick Rams head coach Pete Fiorentino, whose team was playing only its second game of the season on back-to-back nights.
Six different Southwick players scored in the first quarter as the Rams opened with a 14-6 lead. The Rams held every PVCICS Dragons player scoreless through the game’s first eight minutes except for Robert Canavam-Gosselin, who had all six of his team’s first quarter points.
While Liam Poole’s 3-pointer capped off the first quarter for Southwick, it was Nick Michael’s steal and layup with just under five minutes remaining in the second quarter that gave the Rams their largest lead of the first half, 24-11.
A short time later, PVCICS cut the lead to single digits before Southwick extended its lead by 14 points at the half, 32-18. The Rams completed a spectacular play in the closing seconds of the second quarter. Rylan Secovich stole the ball underneath his team’s hoop, made a beautiful behind-the-back pass to Grayson Poole, who drove the lane and completed an and-one.
“That was a great play,” coach Fiorentino said. “We make plays for each other and play hard, then good things happen.”
Southwick completely owned the second half. The Rams outscored the PVCICS Dragons, 26-9.
The third quarter highlights included: a monstrous rebound and putback from Southwick’s Chris Peterson, a sweet mid-range baseline jump shot from Rams’ Jordan Dryz, and 3-pointers from Michael and Dylan Kelleher.
The fourth quarter saw a wave of substitutions on both sides. Southwick and PVCICS combined for just one point through the quarter’s first 5 minutes, 35 seconds. Neither side recorded a field goal until Brennan Vinesett made a steal late in regulation and laid the ball in.
“I think because it’s so early and because the play is so ugly, the way you overcome it is you just play hard,” Fiorentino said. “Any time you watch us over the past six or seven years, we play hard. We might not always hit shots … but hopefully as we play, as we practice – – that’s the goal – – we get better and better, keep playing hard and then we can be a pretty good basketball team.”
Leighton Billings led Southwick with 11 points. Rams’ Grayson Poole and Michael finished with nine points and eight points, respectively. Jack Turgeon chipped in seven, Peterson had six, and Secovich, 4.

Saints shine on “Senior Night”
Westfield Technical Academy 54, St. Mary’s 48
Westfield Technical Academy recognized its five seniors (Brody Zabielski, Riley Sullivan, Emilio Ocasio, Jackson Lambert, and Jesse Lloyd) on “Senior Night.”
“They are all great kids who have worked extremely hard over the years,” Westfield Tech boys basketball head coach Kyle Dulude said. “It was so awesome to watch them all play tonight and have a great time. The most amazing part of this group is their ability to learn, be respectful, and truly care about their teammates.”
The seniors combined for 20 of Westfield Tech’s 54 points, but more importantly, Dulude said, “was their positive attitude that caught fire.”
“The chemistry we have in this program,” he explained, “starts at the top with them. They are all great people.”
Westfield Tech’s Carter Slack finished with a team-high 14 points. Josh Sturmer had 11. St. Mary’s Brady Collins (15 points) and Colin Reed (14) combined for 29.