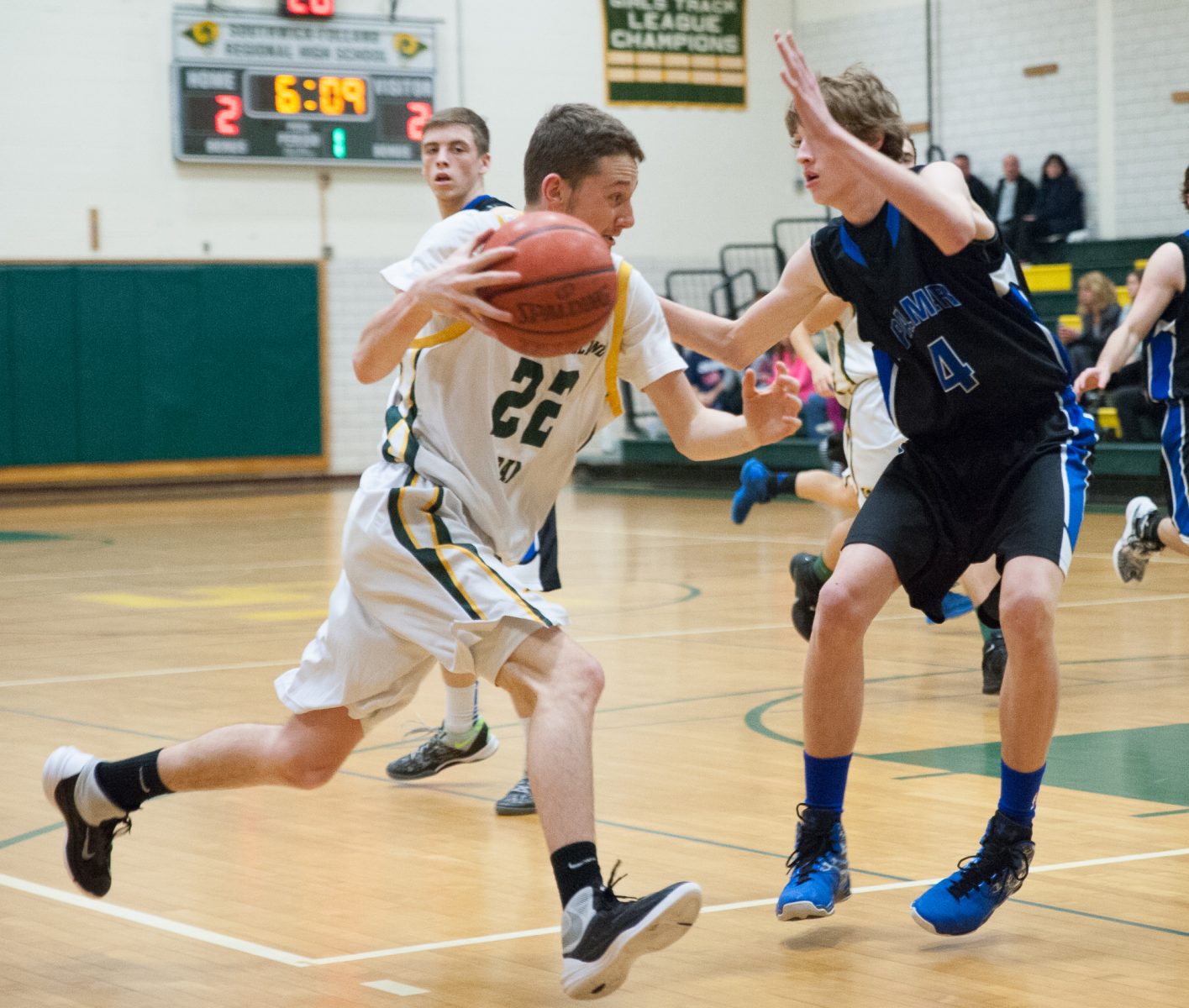 SOUTHWICK – The Grinch snuck into the James E. Vincent Gymnasium in Southwick Tuesday night, and the Rams’ boys’ basketball team watched its winning streak slip away.
Palmer played the role of Scrooge, putting the squeeze on host Southwick, 63-46, halting the Rams’ win streak at three games.
Three players – Matt Niemczura (16 points), Drake Bucknam (15), and Ryan McCarthy (13) – reached double digits scoring for the Panthers.
Ryan LeClair and Bailey Emerson led Southwick (3-1) with 16 and 11 points, respectively.
“Palmer played a very good 1-3-1 zone,” Rams’ coach Dylan Dubuc said. “We were missing Hunter’s outside shooting … I thought that was a big difference.”
It was a back-and-forth tussle through the first two quarters as Palmer led just 28-24 at the halftime break. 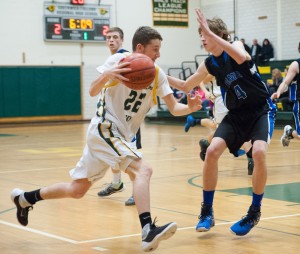 The Panthers went on a 23-12 third quarter run to establish a commanding lead down the stretch.
“That’s really where they got their separation,” coach Dubuc said. “We had good energy, good effort, and we fought. It was just that start of the second half where we went on a pretty long drought.”
Southwick went scoreless for nearly six minutes.
Despite suffering his first loss of the season, Dubuc remained upbeat.
“This was a different loss than last year,” the Rams’ head coach explained. “Our guys fought hard for 32 minutes. They never put their heads down. They kept fighting and worked hard.”
Southwick, along with several other area teams, will now enjoy an extended holiday break. The Rams will return to action next Wed., Dec. 30 at Granby. Tip-off is at 7 p.m.
Said Dubuc: “We’ll try to get that one and get back on a winning streak.”

Bombers hold off Brownies
Westfield 61, Agawam 60
John O’Brien (19 points), Rodney Bernard (13), and Gabe Piepergerdes (11) fueled Westfield (2-1), which staved off a late rally by Agawam.
“It was a dogfight – a really good game,” Bombers’ coach Josh Balestracci said. “They’re tough. They played tough defense. Our young team played tough down the stretch.
Westfield forced a tough off-balance shot on Agawam’s final possession to preserve the win.
“It went our way this time,” Balestracci said.
Aiden Dunn made a key shot late in regulation for Westfield.
Agawam’s Meesha Ohradka scored a team-high 16 points. Sean Moore and Joe Moccio finished with 15 apiece for the Brownies.
ALUMNI GAME: The Westfield High School basketball program will host an alumni game Saturday to honor former longtime boys’ hoops coach Bill Daley for his contributions. The boys’ team will play at 6 p.m., followed by the girls at 7.

Pioneer outlasts WTA
PVCS 47, Westfield Technical Academy 41
Tyler French led Westfield Tech in a loss against Pioneer Valley Christian School.
The Tigers shot just 25 percent from the field, struggled in the transition game, and converted just six of 12 free throws.
“(Pioneer) sat in the zone and we couldn’t shoot out of it,” Westfield Tech coach Kyle Dulude said. “Tyler … had some success when we got into the post but no other bigs were able to convert down low … We have a week until our next game and we need to work harder at practice.”

BOYS’ ICE HOCKEY
Lancers skate past Bombers
Longmeadow 6, Westfield 2
Longmeadow scored four unanswered goals over the last two periods to defeat Westfield at the Olympia Ice Center in West Springfield.
“We’ve got some work to do,” Westfield coach C.B. “Moose” Matthews said. “Nothing went right. We didn’t play too good. We weren’t on our game. We made too many mistakes and it cost us. We have to go back to the drawing board.”