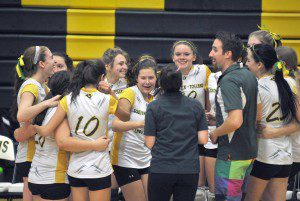 SOUTHWICK – The Southwick-Tolland Regional High School girls’ volleyball team has had some watershed moments during its brief history, but none bigger than the one experienced yesterday.
Southwick shocked previously unbeaten Ludlow 25-22, 25-19, 25-22 in one of the biggest wins in the short history of the program.
Hannah Sitler (3 solo blocks), Simone Thibault (8 digs, 6 kills, 7 aces), Millan Andreoli (9 digs, 4 aces, 6 kills), and Jess Martin (6 assists) delivered key contributions for Southwick, which now needs just two wins in its final three games to earn a spot in the postseason. The Rams are 8-9.
“Southwick played the best they have during this match,” said Southwick coach Kaitlyn Hanlon. “Our serving was superb with 16 aces, our offense was on point with 17 kills, and our defense was unstoppable with 28 digs.”
Ludlow fell to 14-1.

LATE RESULTS
GOLF
Westfield 254, Amherst 291
Tanner Dasso, Ian Wolski, and Cam Dirico all shot 41s to help Westfield finish its regular season with a record of 11-7. The Bombers will now compete in the golf championships Monday at Elmcrest Country Club in East Longmeadow.