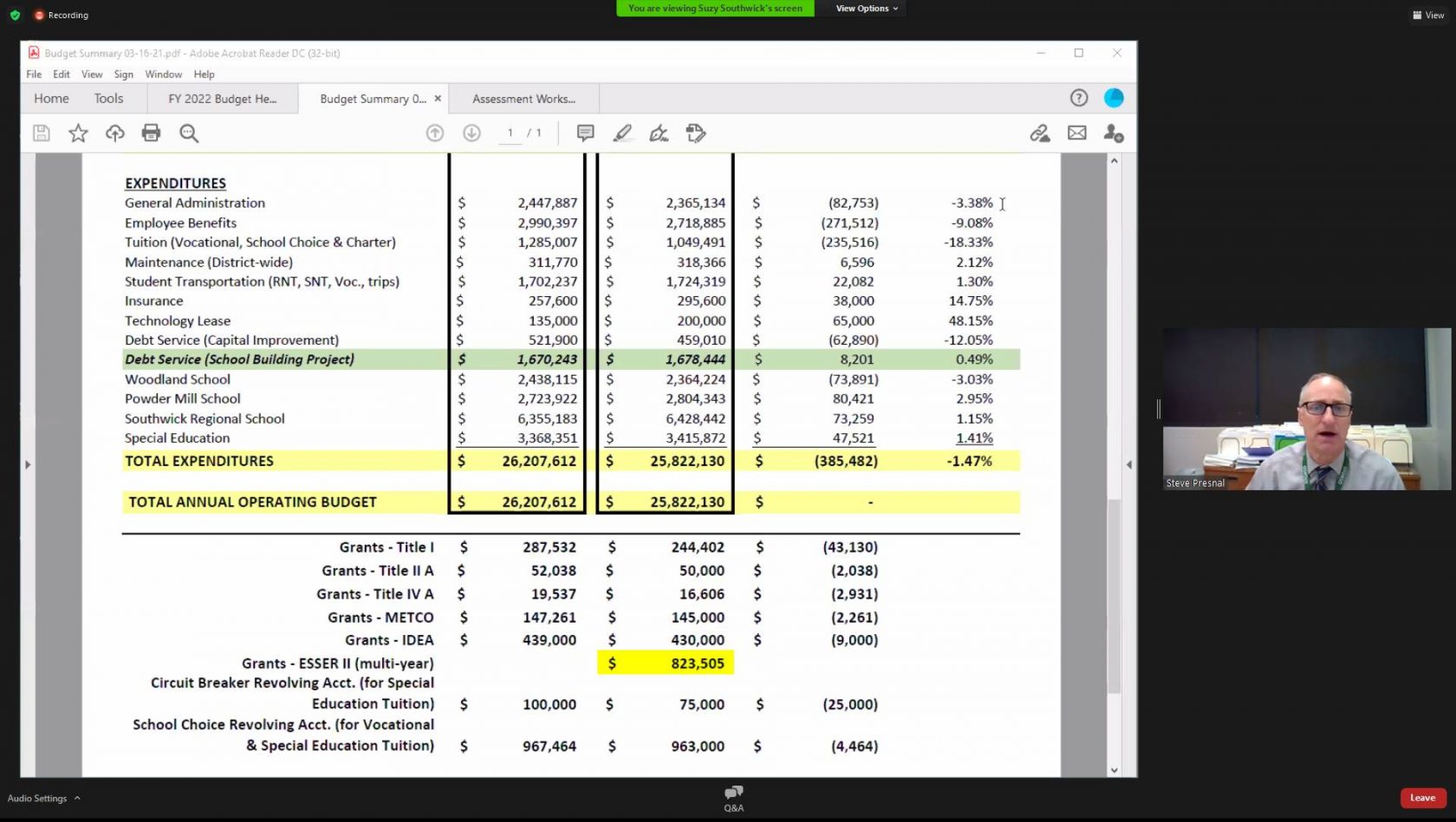 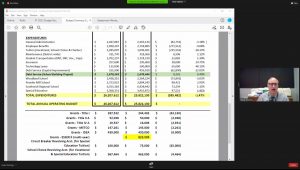 Southwick’s Director of Finance and Operations Steve Presnal presents a detailed look at expenditures that have been budgeted for FY22. (PETER CURRIER SCREENSHOT)

SOUTHWICK- The Southwick-Tolland-Granville Regional School District presented its proposed FY2022 budget Tuesday in a Regional School Committee hearing ahead of a March 30 vote.

Superintendent Jennifer Willard said during the hearing that the enrollment fell this year, largely due to the pandemic. She said that some parents opted to homeschool their children while others chose to enroll them in private schools.

“We did anticipate this,” said Willard, “it is not a Southwick-Tolland-Granville issue. It is every school district in Massachusetts right now.”

The decreased budget is the result of decreases in different forms of revenue for the school district, including from local tuition. Some of that lost revenue is being mitigated by an Elementary and Secondary School Emergency Relief grant (ESSER II). The school district received $909,856 through the grant, $86,351 of which is being used to offset Southwick’s increased required local contribution for the district.

Granville and Tolland’s contributions decreased and the ESSER II grant would not apply to those communities.

Southwick’s Director of Finance and Operations Steve Presnal said that the Department of Elementary and Secondary Education (DESE) informed him that member towns of a regional school district can access funds from the ESSER II grant if they are seeing increases in the required local contribution.

The ESSER II grant is a multi-year grant that can be expanded to FY23. Additional grant money is expected from the recently passed $1.9 trillion American Rescue Plan that could provide more funding than the ESSER II grant.

Along with decreases in revenue, expenditures were lowered for the FY22 budget.

“This is a weird year in that our total expenditures are going down,” said Presnal, “That doesn’t happen very often.”

Though overall expenditures dropped, there were some increases in notable categories, including technology leases for the district’s program that gives every student an electronic device for school work.

Willard said that the 1:1 technology program was originally expected to take four years to implement, but the COVID-19 pandemic forced the district to accelerate its implementation out of necessity.

Following the School Committee’s March 30 vote on the budget, the House Ways and Means Committee will make their budget proposal in April, followed by town meetings for Southwick, Tolland and Granville in May to address the budgets.