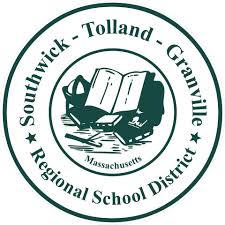 SOUTHWICK – Southwick-Tolland-Granville Regional School District families will choose between a hybrid combination of remote and in-school learning for grades 5-12, and a fully remote option for the upcoming school year.

Students in grades PreK-4 will be fully in school, as will students with special needs and English Language Learners.

The options, recommended by Superintendent Jennifer Willard, were approved by the regional School Committee Aug. 5. The plan presented Wednesday was nearly identical to the one presented last week with one major difference that was applauded by several parents online – the fully remote option will be taught by STGRSD staff. 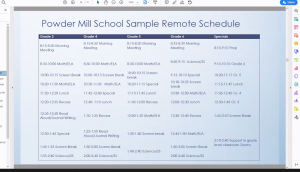 A screenshot from the Southwick-Tolland-Granville School District reopening presentation Aug. 5, 2020.

In the original plan, fully remote learning would be part of the state’s online learning program and would not include a local teacher. There was overwhelming feedback from parents that having a STGRSD teacher in the remote classroom was an important factor in the two choices.

“We heard parents,” Willard said of the change.

During the meeting Wednesday, the three district principals offered a more in-depth presentation of what school, both in class and remote, would look like.

At Woodland Elementary School, Principal Kimberley Saso said all students would return to the classroom or would be fully remote. There is currently no hybrid option for students in grades PreK-4.

At Powdermill School, grades 5-6 would have a hybrid model, with student schedules based on last names. The same model is being used at the Regional School where Principal Joseph Turmel said grade 7 and 8 students would stay in the front two hallways while students in grades 9-12 would be in the back hallways.

All schools will have a phased-in return to the classroom and every Wednesday will be a half-day.

School Committee member Pamela Petschke asked several questions and said class size at Powdermill was one of her main concerns. Some classes at Powdermill could have up to 24 students according to the presentation, while classrooms at Woodland are up to 16 at the highest and the Regional School plan has classes of no more than 14 students.

“I assume this was based on 100 percent of students returning to the classroom,” Petschke said. 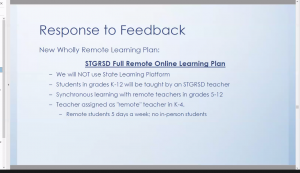 A screenshot from the Southwick-Granville-Tolland Regional School District presentation.

Willard said all reopening plans were based on a full return of all students, however she said they assume there will be students who will be fully remote, which would bring class sizes down.

Transportation will also be a factor in reopening, said Willard. Buses may need to be staggered, which would mean some students would get to school later than others.

Willard encouraged parents to complete a reopening form, available on the district website, that asks parents to choose their child’s learning option as well as indicate if transportation is needed.

Willard urged anyone who could make arrangements to bring their child to school to do so, which would help cut down the number of buses needed.

“If there is any chance you could drive your child to school, that would be great,” she said.

A staggered, “soft,” drop-off and pickup was discussed. Powdermill Principal Erin Carrier said they are considering purchasing a program that would work with parents’ smart devices for pickup, so when a parent arrives to pickup their child, the classroom teacher is alerted to dismiss that child. This would alleviate some of the congestion at dismissal.

Every class would have mask breaks built into the day and outdoor space would be utilized as often as the weather allows. Specials are included in the schedule, however there will be no band this year at Powdermill.

The Committee also approved an updated school calendar which reflects the 10-day staff training at the start of the year, the Wednesday half-days and an adjusted end to the year and graduation. Students will return to school Sept. 15 either in-person or remote based on the phased-in schedule. Remote learning, both for fully remote and hybrid, includes a structured day and online teacher.

Willard thanked everyone who worked on the reopening plans and said they are “fluid” and adaptable based on numbers of students returning to school in-person, spikes in COVID-19 and other factors.

“The word we’re using this year is pivot,” said Willard, noting that administrators and staff have pivoted several times while creating reopening plans.

Willard said the schools would pivot again if required, especially when it comes to keeping everyone safe. Willard noted that all three district communities have had very low numbers when it comes to positive cases of COVID-19, but if there is a spike or anyone at the schools test positive, they would follow state protocols and could switch to fully remote learning.

Director of Finance and Operations Stephen Presnal offered a presentation on operations and noted that sanitizing measures would be taken, including cleaning of high-touch surfaces several times a day, the purchase of special air filters for the schools and other protocols that will be in place.

Now that the Committee approved the plans they will be sent to the Department of Elementary and Secondary Education for approval. The presentation and reopening form are available at stgrsd.org.