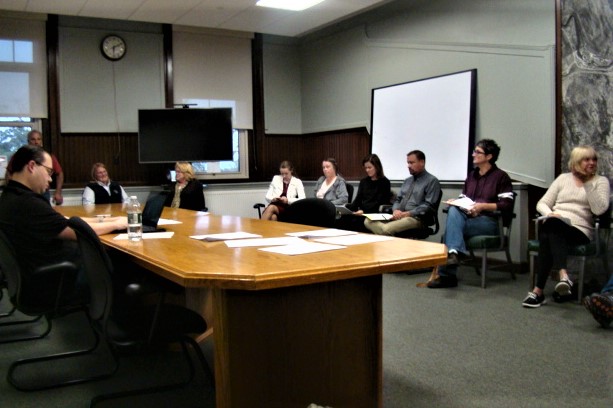 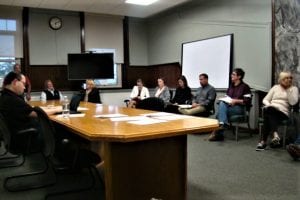 Residents wait for the chance to speak about several issues before the start of Zoning, Planning and Development Committee meeting Oct. 15. (Photo by Amy Porter)

WESTFIELD – Starting at the Zoning, Planning and Development meeting on Oct. 15, and then continuing in the Planning Board meeting which followed, residents from the East Mountain Road area spoke out about the clear cutting taking place at the property on 0 East Mountain Road, owned by Mark and Chris Dupuis, LLC.
“They have deforested the whole hill, putting in a road. We need to do something. Friday through Tuesday they were chipping and cutting in violation of a cease and desist order from MassWildlife. Stumps are lined up against the day care,” said Kathleen Hillman of Susan Drive, who said she had spoken to Conservation Coordinator Meredith Babcock about the situation.
Hillman referred to a letter from the Massachusetts Division of Fisheries and Wildlife dated Oct. 4, stating that they had become aware of the unpermitted work located within the priority and estimated habitat of five state-listed species and five state-listed plant species, and ordered any ongoing work to cease immediately.
“Any on-going work on any portion of Parcels 59R-2, 59R-3 or 59R-21 must cease immediately. No construction or additional land, soil or vegetation alteration activities may be conducted anywhere on the Property until the project is in compliance with the MESA and the WPA,” stated the order, which also said if Dupuis failed to contact the Division by Oct. 11, 2019 and “implement any and all actions necessary to bring the project into compliance with MESA, the Division will take enforcement action, including but not limited to a referral of the matter to the Massachusetts Attorney General’s Office.”
Ward 6 resident Jeffrey Neece said a stormwater management plan is required when more than one acre is disturbed. “The neighbors have not been informed,” he said.
During the Planning Board meeting, Daniel Williams and Patti Williams, who live across the street on East Mountain Road, said there has been significant land clearing and foundation work on the property. Williams said he has spoken to Chris Dupuis.
“When I ask what’s going on, Chris said they are putting in a hemp farm,” Williams said. “They don’t have permitting from MassWildlife folks; a cease and desist order was issued from MassWildlife on Oct. 4, which indicated to stop all activity on the property.”
Williams said Chris Dupuis told him that he had a permit from the state for the hemp farm.
“Nothing from the local authorities, no permits issues from city of Westfield,” Williams said, adding that he is concerned about erosion and sand coming onto their property. “We’re in the dark on this,” he added.
“My understanding is the city is well aware of what’s going on, but it’s not our purview here,” said Planning Board chairman William Carellas.
Williams said he had asked the Building Department, which has issued zero permits. “Is there some sort of enforcement going on,” he asked.
“The city is well aware of it. I made a call,” Carellas said.
Hillman also came forward to speak.

“There are zoning laws and ordinances. He’s in violation of many of them. He’s moved a lot of land. There are things that this board can do. Something should be done immediately,” she told the board.
On Wednesday, Ward 6 Councilor William Onyski said the owners did apply for and receive a hemp license from the state.

“Whether or not they have a license, they’re still not immune,” he said regarding MassWildlife conservation restrictions.
Earlier in the day, Onyski said he had participated in a meeting with members from the police, law, conservation, public works, planning and building departments to review what has been going on, and what the state provided in the cease and desist order.
Onyski said the city plans to pursue legal action against the property owners, and is taking action to get on the property “right now.”
This was also confirmed by Mayor Brian P. Sullivan. “The city is preparing to get on the property and get legal action. Multiple departments have been called in,” the Mayor said, adding, “The plan of action is to inspect it.”
Sullivan said the response will also be up to MassWildlife. “It’s not a pretty sight,” he said about the stumps and cleared land visible from the road.