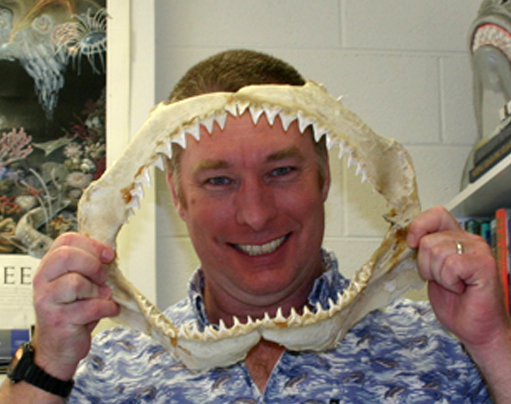 WESTFIELD-Dr. John Morrissey’s fascination with marine life began at the age of 7 after watching “The Undersea World of Jacques Cousteau” in the late 1960s.

“As a graduate student in the late 1980s, I was welcomed aboard the Calypso in a dream come true,” said Morrissey.

Morrissey, chair of the Department of Biology and Environmental Science at Sweet Briar College, Sweet Briar, Virginia, will share his “love” of the seas during a free presentation titled “The Truth About Sharks” on Oct. 23. The lecture, open to the public, begins at 6:30 p.m. in Scanlon Banquet Hall on the campus of Westfield State University. 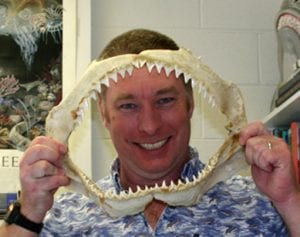 Dr. John Morrissey of Sweet Briar College will present a free lecture titled “The Truth About Sharks” at Westfield State University on Oct. 23. He is seen with the jaw of a Cuban Night Shark, a relative of the Oceanic Whitetip Shark. (Submitted photo)

The hour-long, slide-illustrated lecture is planned in conjunction with Mass STEM (Science, Technology, Engineering and Mathematics) Week, according to Dr. Jennifer A. Hanselman, Dean of Westfield State’s College of Mathematics and Sciences and organizer of STEM Week events on campus.

The lecture is sponsored by the College of Mathematics and Sciences and the Pioneer Valley STEM Network.

“Dr. Morrissey is an engaging, accomplished shark biologist,” said Hanselman, noting she has worked with him and one of her colleagues, Dr. Jason Ramsay of the Biology Department, shares similar research interests.

“Dr. Ramsay is facilitating a teacher workshop prior to the talk so teachers can learn new ways to teach about structure and function,” said Hanselman.

Mass STEM Week, a statewide effort from Oct. 21-25, aims to boost the interest, awareness and ability of all learners to envision themselves in STEM education and employment opportunities. In addition, a STEM Week Challenge will take place in the public schools centering on the theme of achieving “zero waste.” Students will tackle the challenge for each grade span to solve real problems including food waste, micro plastics, solar energy and e-waste. The challenge is sponsored by Mass STEM Hub, a program of the One8 Foundation in partnership with Project Lead The Way, the state Department of Environmental Protection and TD Garden.

“During Mass STEM Week, we plan activities that engage students as they learn new concepts,” said Hanselman. “Many local students developed a fascination with sharks after visiting Cape Cod or watching Shark Week on the Discovery Channel. Dr. Morrissey will address some of the myths and misconceptions about sharks, as they are very complex creatures.”

Morrissey notes his talk will be a “whirl-wind tour” of the natural history of sharks and their relatives, including skates, rays, sawfishes and mantas.

“I’ll touch on their diversity, their sensory abilities, their diets, and their reproductive strategies,” said Morrissey, adding he will close the program with information on shark attacks and shark conservation.

Morrissey, a certified diver since 1981 and a lifetime member of the nonprofit American Elasmobranch Society, will introduce the audience to a wide array of information while dispelling common myths and misconceptions about sharks.

“Sharks represent a fifth class of vertebrates that is biologically distinct from fishes, amphibians, reptiles, birds and mammals,” said Morrissey.

Morrissey said sharks not only detect weaker stimuli than humans, but can also detect some stimuli that we cannot – including electromagnetic fields. Additionally, he noted sharks are “perhaps” the most important apex predators in most oceans (being replaced by birds and mammals in polar seas).

“Their influence on community structure in most of the ocean cannot be overstated,” he said.

Morrissey will also be available after the lecture to meet with attendees and answer questions.

“Sharks are beautiful,” said Morrissey. “To me, watching a blue shark glide by is as awe-inspiring as watching an eagle soar overhead.”

Morrissey’s overall goal is to share his passion for sharks and also introduce the work he and his students are undertaking including studying a new species of gulper shark from the Cayman Trench, the cownose rays in Chesapeake Bay, and chain catsharks in his lab.

“I love sharks, and my goal is to ensure that every attendee loves them as much as I do after leaving my talk,” he said.