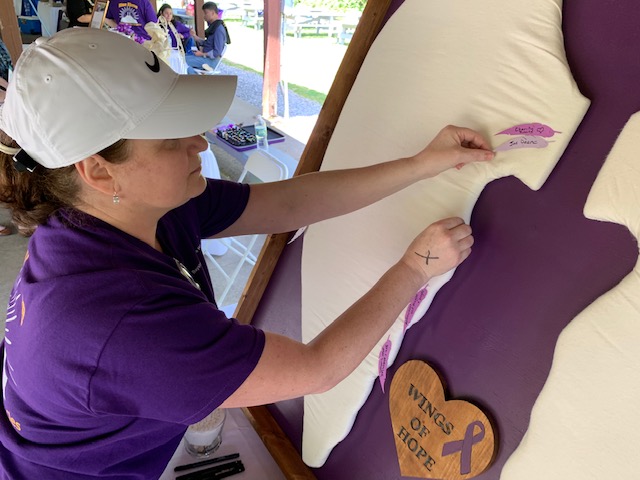 The free event, Overcoming Obstacles of the Opioid Epidemic, was conducted Saturday afternoon at Strathmore Park and was well attended, according to organizers. 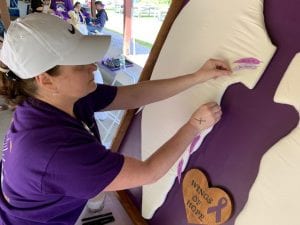 Jennifer Panniello of Montgomery writes a message on a feather for the Wings of Hope memorial at Baystate Noble Hospital’s community awareness day on the opioid epidemic on May 25. Panniello is a nurse in the hospital’s emergency department.

“Through today’s event, we are building on the relationships we already have with local organizations,” said Tracy Clapp, BSN, RN manager and educator with Baystate Noble’s case management department. Clapp added the hospital is committed to building partnerships to prevent and treat opioid addiction and related substance abuse throughout the region.

Michael Mansur of Westfield, who is a co-facilitator of the Alternatives to Suicide group that meets at the Episcopal Church of the Atonement in Westfield, echoed those sentiments.

“After six suicide attempts I was lucky I found the help I needed and now want to pay it forward,” said Mansur.

The peer-run group, sponsored by the Western Mass Recovery Learning Community, is by and for people who have struggled with suicidal thoughts or attempts. Mansur noted the gathering space on the church’s third floor on Wednesdays from 6:30 to 8 p.m. allows people to come together to support each other, strategize alternatives, and talk openly about their despair and other challenges. 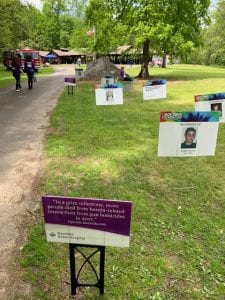 “People showed me how to save my life,” said Mansur. “The group wants to help people with no judgment.”

“Certified therapeutic grade essential oils can help someone become empowered to heal and help themselves,” said McCarthy. “I can say with confidence, ‘Yes, there’s an oil for that.’”

McCarthy’s display included a variety of essential oils, ranging from bergamot which is used for all addictions as well as a way to break a relapse cycle, to orange which is a strong antidepressant.

Among the many highlights of the afternoon was a walking path to the pavilion area, allowing attendees to take a solemn moment and reflect on the lives lost to addiction. A quote from the Centers for Disease Control and Prevention led the display stating – “In 2017, nearly 494,000 people in the United States (12-years-old or older) reported using heroin in the past year, which is an estimated rate of 0.2 per 100 persons. And in 2015, 81,326 emergency department visits occurred for unintentional, heroin-related poisonings in America, which is an estimated rate of almost 26 per 100,000 people.”

Also, a Wings of Hope memorial encouraged persons to take a feather, write a name or message to a friend, family or community member who they had lost to addiction, and pin it on the cloth wings. 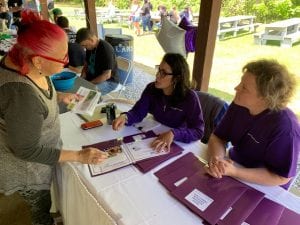 Jennifer Panniello, RN, of Montgomery, was among the first to write on a feather.

“I had reached out to my Facebook friends, asking if anyone had a message they would like posted,” said Panniello, who works in Baystate Noble Hospital’s emergency department. “A response came shortly after from a friend and the message has been placed on a feather.”

Sisters Laila Duffy, 16, and Riana Duffy, 15, were watching over the Wings of Hope memorial and answering questions that arose. Both teens also placed messages on feathers.

“My message was ‘always have hope,’” said Riana Duffy, adding she has seen fellow students at West Springfield High School struggle with addiction. “I feel once someone is involved in drugs they think it’s their fate.”

“It’s sad to see how many people are involved in drugs and alcohol at school,” said Laila Duffy.

Clapp was joined by Rosa Feldman, MSN, RN, director of Baystate Noble’s inpatient care services, who distributed an opioid awareness resource and support guide. The packet included instructions for using Narcan nasal spray, guidelines of the Good Samaritan Law when   assisting a person who has overdosed, and a host of support groups including Narcotics Anonymous. 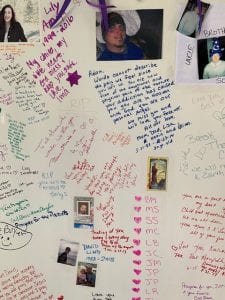 A small section of the Wall of Hope is seen that was on display at Baystate Noble Hospital’s community awareness day on the opioid epidemic May 25.

“The Massachusetts Substance Use Helpline is another important service,” said Clapp. The Helpline can be reached at (800) 327-5050 or visit online at HelplineMA.org.

Rounding out the afternoon was a keynote address by Kirk Jonah from the Jack Jonah Foundation, based in West Springfield. Jonah discussed losing his teenage son to a heroin overdose and how the foundation’s mission is to help raise awareness about this epidemic.

Throughout the afternoon, attendees were also welcome to write a message on the Wall of Hope, participate in the New England Mobile Axe Throwing display aimed at relieving stress, and children enjoyed field activities and inflatable “obstacle” courses.

“All of our participants today are helping people to overcome obstacles and rise above the challenges they face,” said Clapp.