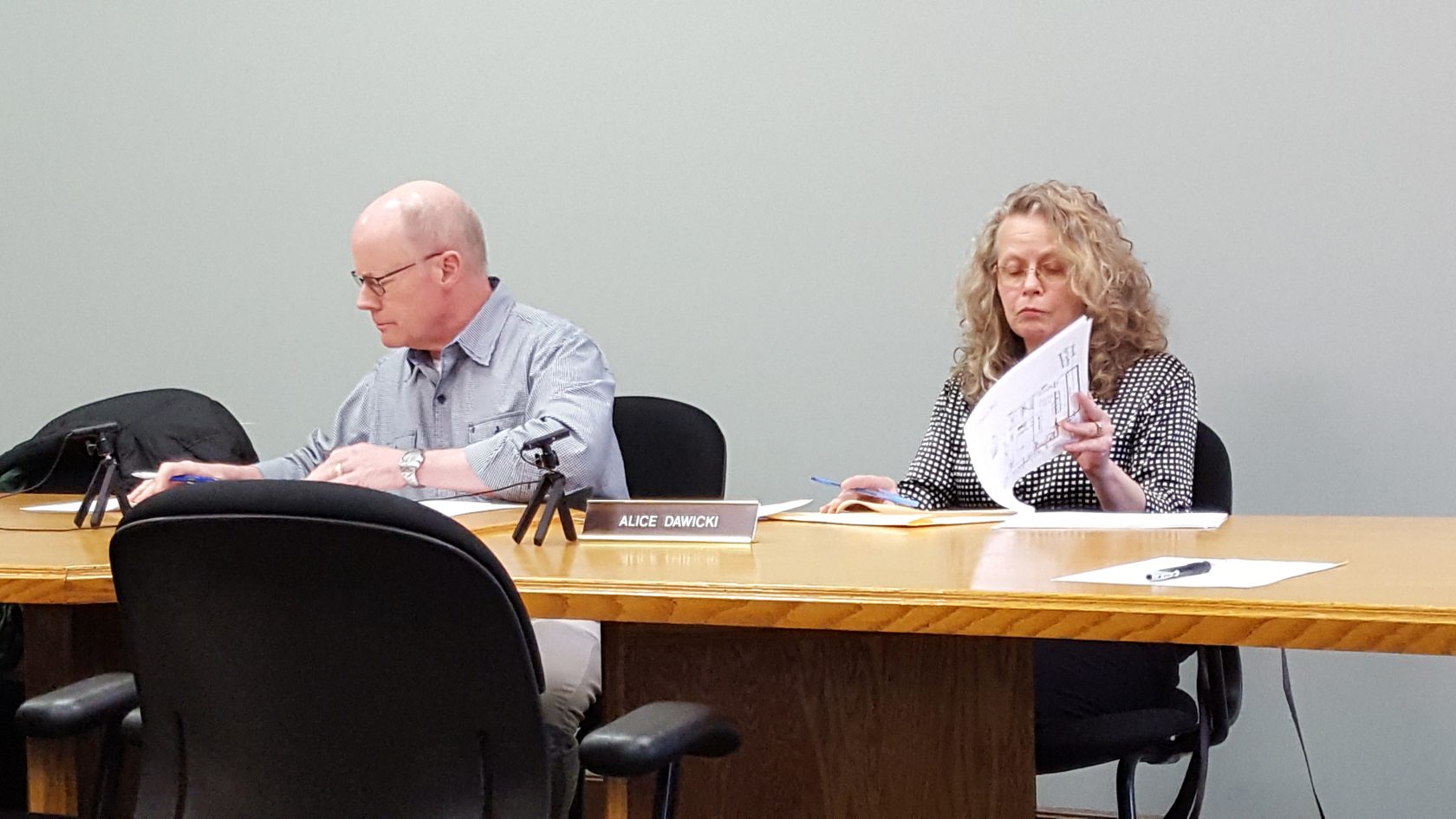 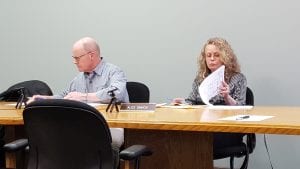 From Left: License Commissioners Christopher Mowatt and Alice Dawicki. The two voted to allow alcohol to be served on The Hangars upcoming outdoor dining patio, but they chose to wait on voting for allowing music to be played.

WESTFIELD- The Westfield License Commission met Monday evening at City Hall to discuss and vote on granting a license alteration to allow The Hangar on School Street to open an outdoor dining area where alcohol would be served, and music played.

Harold Tramazzo, the owner of The Hangar in Westfield, was present to give his case to the commission. The License Commission, which consisted of just Chairman Christopher Mowatt and Commissioner Alice Dawicki while Edward Diaz was absent, chose to vote separately on the subjects of serving alcohol outdoors and playing music outdoors. They voted to allow the serving of alcohol in the planned outdoor dining patio, but chose to wait until May 13th to vote on allowing music to be played through speakers outside.

Tramazzo argued that the patio space on the northern side of The Hangar is underutilized.

“You guys built this beautiful thing outside of our building and it sits empty,” said Tramazzo, “There is definitely a demand for outdoor seating.”

Tramazzo has agreed to lease the small patio from the city for $100 per month. As a part of the agreement, the patio would not be open to patrons of The Hangar past 10 p.m. on any nights. For the commissioners to vote for it, they needed assurance that the area would be clearly marked off and that alcohol would not be able to be brought outside the area into public space. Tramazzo said that the patio would be roped off and four to five employees would be present and keeping watch in addition to serving guests. He plans to have a capacity of 40 guests within the outdoor patio.

Also present at the meeting was a group of residents who live around the Gaslight District near The Hangar. For the most part, they voiced their concerns and opposition to allowing Tramazzo to open the outdoor dining patio. Among their concerns was the possibility of alcohol being brought outside the area. The main concern, however, was with the possible addition of extra noise at late hours.

Tom Denardo, of 281 Buck Pond Road in Westfield, said that Church Street almost acts like a tunnel in the way that it carries sound.

“You can hear somebody at the barbershop talking like I’m talking right now, through Church Street,” said Denardo. He later added that he is, “All about revitalizing downtown Westfield. But there are certain areas that are more residential than they are commercial.”

Denardo also asked at length about the terms and length of the lease. The commission informed him that the lease is on a one year term but that it can be renewed once from April 2020 to October 2020. The agreement also states that the patio will only be open to patrons from April 1st to October 31st.

Resident Karen Callini of 45 Church Street said that one of her main issues with the license is that it would attract more college students to an area that already has college housing close by. She said that she finds herself cleaning up after the college students as it is, and would expect it to get worse if an outdoor patio where alcohol is served would be allowed.

“It’s enough that I have to pick up beer bottles, nips, and trash daily,” said Callini.

Tramazzo maintained that any music that would be played would be just background music. He added that it would not be any sort of explicit, hardcore genres of music and it would be played from just two speakers. The speakers would be hung up high and pointed at the ground, according to Tramazzo.

Lori Miller, who owns property at 22 Church Street, said that she does not believe the 10 p.m. cutoff for the patio is early enough, especially in a neighborhood that is largely residential.

The two-person commission voted to allow Tramazzo to open the patio to allow alcohol to be served with food. They chose to hold off on the vote on allowing music to be played until Commissioner Diaz could give his input and they could get more information. Tramazzo did note that the music would be under a certain decibel level, but he was unaware of the exact number at the time of the meeting.