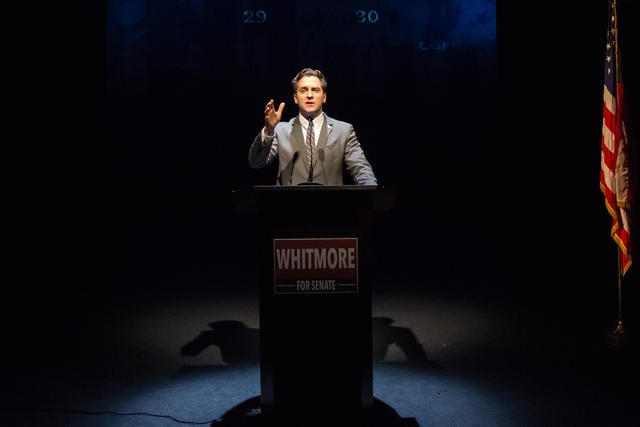 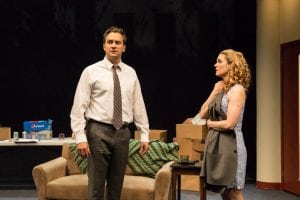 Berkshire Theatre Group has opened its 90th season with Jason Odell Williams’ Church & State, a vibrant and timely comedic drama about a red state Republican senator, who runs for re-election, as a school shooting brings up the debate about gun control and gun violence center stage. As the Senator must choose between party lines and his conscience, he is swayed by his blue state campaign manager, his Christian right wife, and his approval ratings, Twitter feed responses, and public opinion. Church & State is a perfectly timely play written by an up-and-coming playwright, who, as a student at University of Virginia, was impacted by the Virginia Tech shootings in 2007, and so many subsequent tragedies since, as school shootings and gun violence have sadly become the new normal.

Good theatre can become a starting point for discussion, engagement, and debate, even though theatre audiences often lean left. The searing Broadway-bound American Son, which premiered at Barrington Stage, explored racial tension and stereotypes. That theatre will soon present The Cake, a drama about a baker conflicted when a lesbian couple ask for a wedding cake. TheaterWorks’ current offering, The Invisible Hand, offers a blunt portrait of Islamiphobia, and terrorism from a Pakistani perspective. Church & State is well-written, fascinating to watch, and a starting point for discussion and reflection. Each performance offers a talk-back. Stay for it! Williams’ script is great theatre with well-drawn characters, varying points of view, and humor. 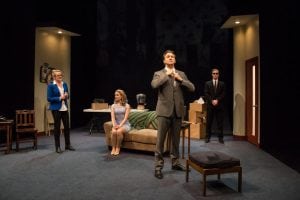 Charlotte Cohn’s staging is superb, and David L. Arsenault’s set and lighting, beautifully enhanced by Alex Hill’s projections and video, and Scott Killian’s sound design add so much to the taut 75-minnute play.

Graham Rowat, a familiar Berkshire Theatre Group star of mainly musicals, A Little Night Music and Bells Are Ringing, is commanding as the senator battling his conscience. Judy Jerome as his Southern belle wife has some of the best laughs, but she’s a good balance for Rowat’s character. Keira Naughton plays the uptight campaign manager; the scenes with Jerome are funny. Andy Talen plays several characters from a blogger/reporter to a security guy to a campaign hand. They have a great sense of ensemble.

I personally like plays that tackle issues of current concerns and make me think. The fact that Church & State is good theatre and funny, was a real plus. At the opening night talkback, playwright and director, who are also husband and wife, shared their insights, and got the audience to share theirs.

Church & State only runs through June 30. It’s a great opening to a milestone season. 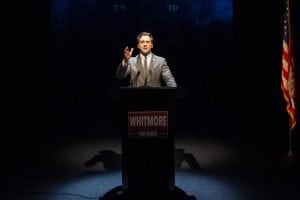