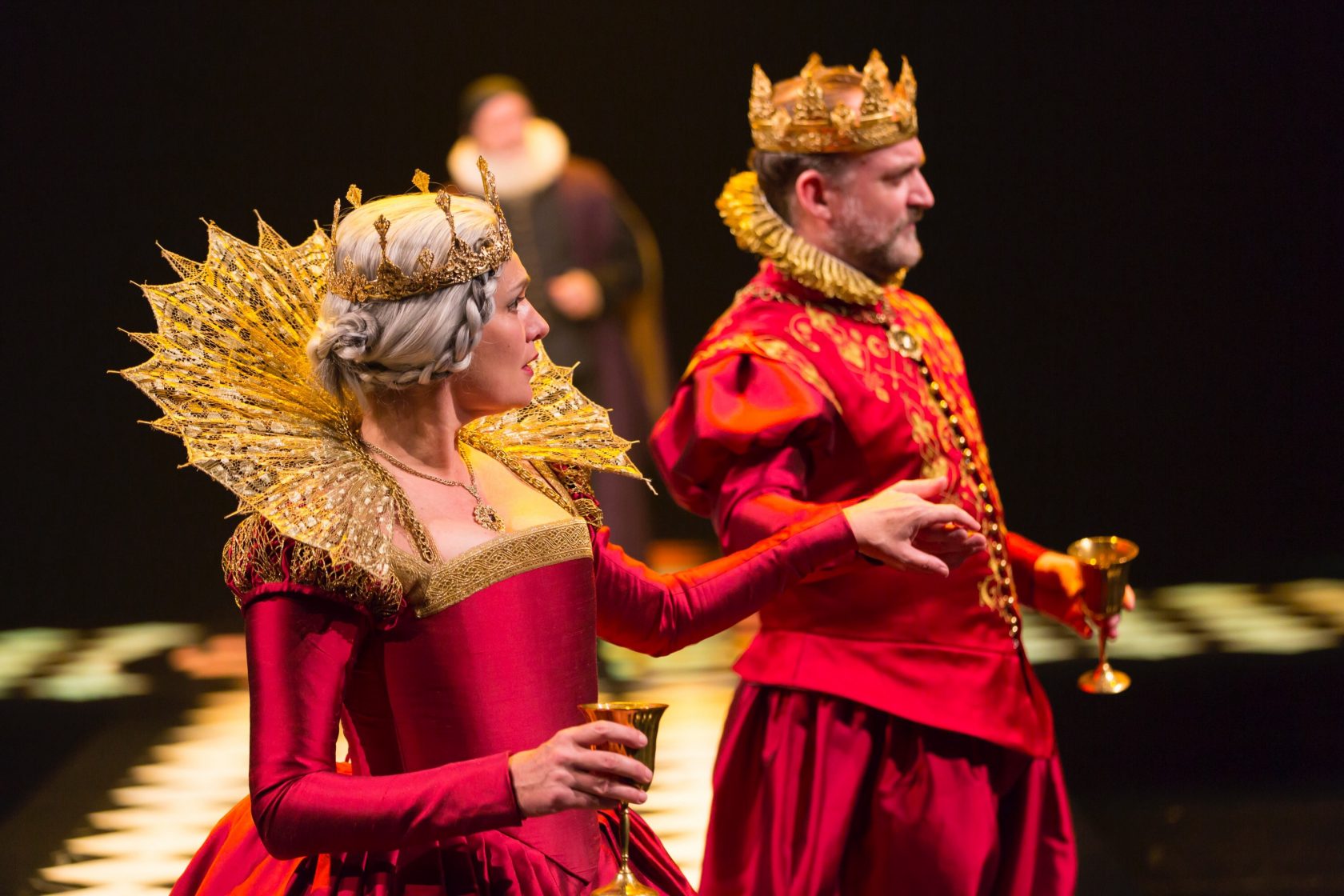 HARTFORD – Hartford Stage Artistic Director Darko Tresnjak, who just received a Tony Award for directing “A Gentleman’s Guide to Love and Murder” (which also won the Tony for “Best Musical”) has returned to Hartford to direct and design “Hamlet”. Shakespeare’s classic tale of revenge and retribution gone wrong plays through November 16.
This production of “Hamlet” is stunning theatre, directed with a contemporary pace and designed brilliantly by Tresnjak, richly costumed by Fabio Toblini, nicely lit by Matthew Richards, with great sound by Jane Shaw. Shakespeare could write compelling drama, and Tresnjak choreographs the words and rhymes with an edge. Here’s a director and designer, who along with his other designers, and a great acting ensemble, understand what makes good material and good theatre, and delivers it with a punch. The audience paid rapt attention throughout the performance… not a stir could be heard. 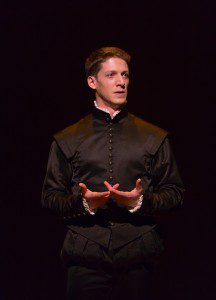 Many people cringe when they hear “Shakespeare”. Chalk that up to teachers who can’t teach it, and turn compelling theatre that has stood the test of time into a boring class exercise. I was lucky to have a Shakespeare devotee for a teacher in high school. He said that if one looked at Shakespeare in terms of the audiences and world views of the day in which it was performed, it becomes riveting as an entertainment of the time.
So, before you go “Yuck, Shakespeare” and opt out of one of the world’s greatest dramas, think of “Hamlet” in more contemporary terms. Prince Charming, a college guy, comes home on a school break to learn that his father, the king, has died, while he’s been at school, and his mom married his uncle. His best friends have betrayed him, and his girlfriend is prone to histrionics. Furthermore, his father’s ghost comes back from the other side to spill the beans. With no therapists or meds or Facebook to “share” on, the college guy seeks revenge. 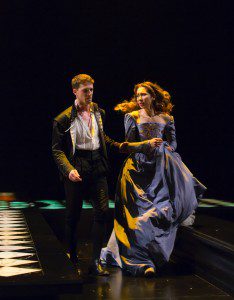 Sound familiar? Revenge and retribution have fueled the best of the soaps. “Hamlet” certainly holds its own against other family dramas from “Dallas” and “Dynasty” to “The Sopranos”. Shakespeare’s rich language in “Hamlet” has more famous quotes in everyday use today than Irving Berlin pop standards in a crowd-pleaser down the river. Are these familiar? (“To thine own self be true”, “To be, or not to be: that is the question”, “To sleep, perchance to dream”, “Though this be madness, yet there is method in’t”, “The lady doth protest too much”).
Zach Appleman, a Yale School of Drama and “War Horse” on Broadway alum, handles the title role beautifully. He’s easy on the eyes, young enough looking to pass for a college kid, strong enough to maintain the power of the character, and nimble with Shakespeare’s language and Tresnjak’s staging. Kate Forbes as Hamlet’s mother and Andrew Long as Hamlet’s uncle, the new king, give powerful performances, as does Anthony Roach as Laertes and Brittany Vicars as his sister, Ophelia, Hamlet’s love interest. Edward James Hyland finds the humor in the role of Polonius. Kudos to the ensemble, many of whom play multiple roles. Several ensemble members are acting students from The Hartt School, and they hold their own with the pros. Hartford Stage should be commended for giving these young actors an opportunity to practice their craft.
This production of “Hamlet” proves that in the right hands, an old chestnunt can feel fresh and relevant. Hartford Stage’s “Hamlet” is well worth the visit.
Hartford Stage presents “Hamlet” by William Shakespeare. Directed and designed by Darko Tresnjak. Costume design by Fabio Toblini. Lighting design by Matthew Richards. Sound design by Jane Shaw. Through November 16. Hartford Stage. For tickets: 860-527-5151 or www.hartfordstage.org.
Mark G. Auerbach studied theatre at American University and the Yale School of Drama. He’s worked for arts organizations and reported on theatre for newspapers and radio.