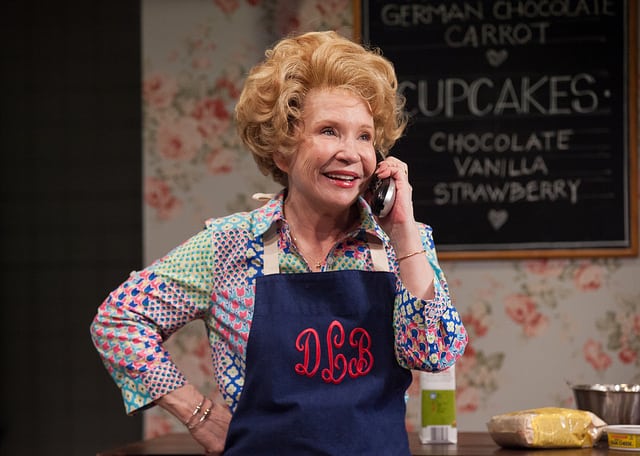 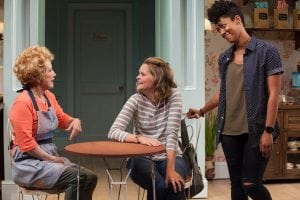 How ironic that a play about a baker deciding whether or not to bake for a gay wedding would open at Barrington Stage on PRIDE weekend, barely a month after the Supreme Court ruled in favor of a Colorado baker, who refused, on religious grounds, to bake a wedding cake for a gay couple. And, earlier this week, a Virginia restaurateur refused to serve Trump spokesperson Sarah Huckabee Sanders. There’s nothing funny about the divisiveness of both sides, who have lost their reason and compassion in their blind march to support their side, right or wrong.

Barrington Stage is currently presenting Bekah Brunstetter’s The Cake, starring Berkshires actress Debra Jo Rupp, who created the role of Della, a baker who has to decide if she’ll bake a cake for her best friend’s daughter, who is marrying a woman. Brunstetter’s script is funny and wise. In fact, it’s so funny in places, that the audiences are convulsing in laughter. That’s a good thing. Her script is also compassionate and smart without overheating a volatile subject or making the audience, regardless of their point of view, uncomfortable.

The Cake originated in Los Angeles, where it won awards for its script, and star, Debra Jo Rupp. It’s one of a series of recent plays on area stages, that confronts current affairs, from Barrington Stage’s now Broadway-bound American Son, to Berkshire Theatre Group’s Church & State. 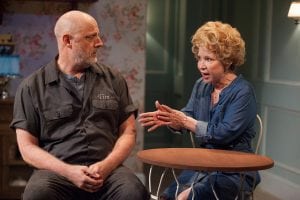 Douglas Rees and Debra Jo Rupp in The Cake at Barrington Stage. Photo by Carolyn Brown.

Debra Jo Ruff’s character, Della, is caught between what she feels is right, and what traditions she was raised with, i.e. “I was brought up that way”. Rupp is a superb comedienne and character actress, and she gives one of the best performances I’ve seen in a long time.

To the credit of Jennifer Chambers, Rupp’s performance is balanced by the other members of the company, all equally fine. Douglas Rees plays Della’s husband, who tries to understand Della’s frame of view; Virginia Vale is her friend’s daughter, caught up in her southern roots, yet conflicted by her sexual orientation’s acceptance in the south. Her fiancee, Nemuna Ceesay is out and proud and determined to make the most of her life.

Tim Mackabee’s bake shop set is magnificent, and the Simply Sweet-provided cakes all over the stage will make you hungry. Eat dessert before the show. I like Tricia Barsamian’s costumes and Matthew Richard’s lighting a lot. Alexander Sovronsky provided a balanced and nuanced music score and sound design, something he’s also done for WAM Theatre’s The Last Wife, and Hartford Stage’s A Midsummer Night’s Dream. His work is worth checking out in upcoming productions of Sister Mary Ingnatius at Berkshire Theatre Group and The Glass Menagerie at Barrington Stage. 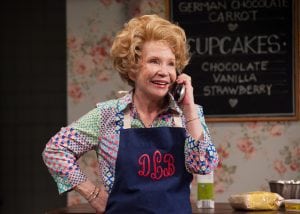 Debra Jo Rupp in The Cake at Barrington Stage. Photo by Carolyn Brown.

The presentation of sensitive topics of current events seem to work better these days onstage, than on screen or TV, possibly because theatre audiences expect their entertainment to be entertaining and provocative, and because there’s a direct link between actor and audience. I credit theatres like Barrington Stage who can present material on important topics like this, but who never forget that the theatre has to be well-presented, and the energy between stage and audience nurtured.

Debra Jo Rupp’s outstanding performance may be icing on The Cake, but the ingredients and the chefs would get a top Michelin set of stars, if Michelin reviewed theatre.