WESTFIELD – There is no road block or test that the Westfield Technical Academy boys soccer team can not pass.
That has been the case for several years now and even a new division could not curb the efforts of the Westfield Tech Tigers.
Brad Marion and Frank Florek scored one goal apiece, Anatoliy Suprunchuk (3 saves) recorded a shutout and Westfield Tech silenced Putnam 2-0 Wednesday. The victory secured the Tigers a Bi-County League title, and likely a top seed in the state vocational tournament. It is their fourth straight league title.
“Our three seniors (Anatoliy and Ruvim Suprunchuk, and Yeremy Kovylyak) should be extremely proud to have accomplished such a task over their four years,” Westfield Tech coach Kyle Dulude said.
Westfield Tech will honor the three seniors on “Senior Night” Thursday against McCann Tech at Bullens Field, beginning at 6 p.m.
“I am so proud of all the players in our program,” Dulude said. “The hard work and effort they put in year after year is tremendous. I also want to give a shout out to our girls soccer program for qualifying for the Western Mass tournament today. I have many of those girls in class and I think our two programs bring much excitement into classes and shop during the school hours. Hats off to coach Washington and Brown. Our school has great things going on and it is great to see success.”

Gators post 10th shutout
Gateway 3, Mount Everett 0
Peyton Bucko set up the game’s first two goals – one each from Jessica Van Heynigen and Ava Auclair, and Donna Viel scored off a pass from Hannah Duggan in Gateway’s road shutout.
Gateway goalie Becca Herman (3 saves) had a shutout. Jules Dickenson also had a strong game at sweeper, getting the offense moving upfield for the Gators.
It was Gateway’s 10th shutout of the season. 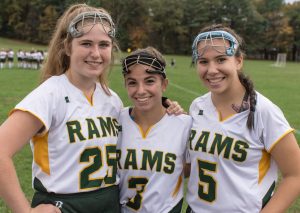 FIELD HOCKEY
Rams net tie
Southwick 2, Holyoke 2
Sarah Hough and Emily Martin each had one goal in a tie at home for Southwick. Rams’ Rachel Diamond collected an assist.
Liza Keane scored both Holyoke goals.
Goalie Clare Stratton recorded 12 saves for Southwick, which bounced back from a 7-1 loss to Agawam on Monday. In that game, Sarah Hough scored the Rams’ only goal. Sydney Gorman assisted.