WESTFIELD – One year ago, the Westfield Bombers soared to a 40-16 win over the West Springfield Terriers in the Western Massachusetts Division 2 football final. The Bombers came within one victory of representing the Central-West in the Super Bowl.
The Bombers’ reward for reaching such lofty heights? A 151-mile trip to the state’s eastern shores to take on the defending Division 2A state champs.
On Saturday, the Westfield High School football team travels to the Cape to take on the defending D2A champion Falmouth Clippers in a 2017 season opener. Kickoff is at 4 p.m.
There appear to be some similarities between the two teams. 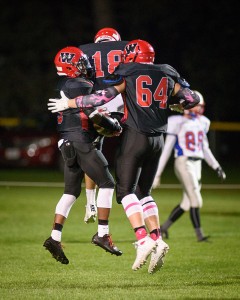 Westfield celebrates the one of several touchdowns scored during the 2016 season. (File Photo by Marc St. Onge)

Much like Westfield, Falmouth was led by a group of seniors who matured together for nearly three years of varsity play. According to data compiled by The Cape Cod Times, the Clippers scored at least 34 points in 10 games and beat teams by at least three touchdowns in nine en route to an undefeated season.
Westfield will be tasked with slowing a strong backfield with senior running back Sam Koss and fullback Gates Kelliher leading the way. Both backs combined for nearly 200 rushing yards in last season’s championship game with Kelliher piling up 95 yards and three touchdowns, and Koss rushing for 99.
Will the tough get going?
The early season schedule does not let up for Westfield. The Bombers will have to hit the road for another away game the following week when they take on Hoosac Valley on a Friday night tilt in Cheshire Sept. 22.
Westfield plays at Agawam Friday, Sept. 29 before finally returning to Bullens Field for their home opener Fri., Oct. 6.
The intrigue expects to continue later this season as well with Thanksgiving Day football returning after a one-year absence, following the end of the Westfield-Cathedral series. The Bombers have entered into a four-year agreement to play Minnechaug. The first meeting is in Wilbraham.
“It was a good fit,” Westfield athletic director Eileen Flaherty said. “Amherst didn’t want to continue their series (against Minnechaug). When Amherst said ‘no’, Minnechaug reached out to us.”
Administrators from Westfield signed off on the partnership.
“We have a pretty healthy competition with them in a lot of our sports,” Flaherty said. “They’re very hospitable.”