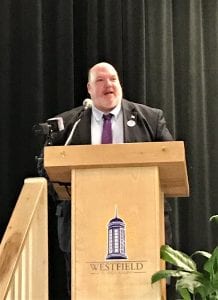 WESTFIELD- The number of confirmed cases of COVID-19 increased to 57 as of Tuesday morning.

Public Health Director Joseph Rouse said March 30 that he has noticed Westfield’s numbers stand out from those of neighboring communities, most of which are reporting a much lower number of confirmed cases.

He said that he does not believe that Westfield is some sort of local epicenter of the disease or an outlier. Instead, he believes other communities have not reported accurate results.

“I can assure you that our numbers are not inconsistent with what other communities should be at,” said Rouse, who later added, “I’m a very big advocate that we just want to be transparent and provide accurate info. Unfortunately, in this situation, it makes us stand out.”

Rouse said that at least some of the cases that are being confirmed are not recent cases, but rather cases where the tests were still pending results due to a glitch in the testing systems. That glitch was apparently resolved March 24.

“This should be sort of a wake-up call for everyone that it is here and it continues to spread,” said Rouse, “Listen to the precautions, stay home when you can, especially stay home if you are sick at all.”

Westfield Mayor Donald F. Humason said Monday that his office is now largely operating under the authority of Rouse and the Health Department when it comes to coordinating the city response to the coronavirus. This is due in part because of the emergency declaration by Gov. Charlie D. Baker earlier this month and because Westfield operates normally with a “weak mayor” form of government.

Humason and other city employees and officials have been working in a City Hall that has been closed to the public in order to limit the spread of the virus. Every day, he and the department heads have conference calls to coordinate the response.

“We all have to be involved because the city still has to run every day,” said Humason.

Humason said that some plans that have been proposed include using the empty dorms on the campus of Westfield State University if the local healthcare systems become overwhelmed.

“This is different from anything we have done before,” said Humason.

Humason acknowledged the number of upcoming city events that had to be cancelled due to the spread of the virus, including the annual Mayor’s Easter Egg Hunt.

“The Earth Day Cleanup event may have to be cancelled. We are not even sure about any 4th of July events yet,” said Humason.

Going forward, Humason said there are plans to have weekly or bi-weekly press conferences outside of City Hall in order to better disseminate information to the public. Proper social distancing would likely be in place at such a press conference.