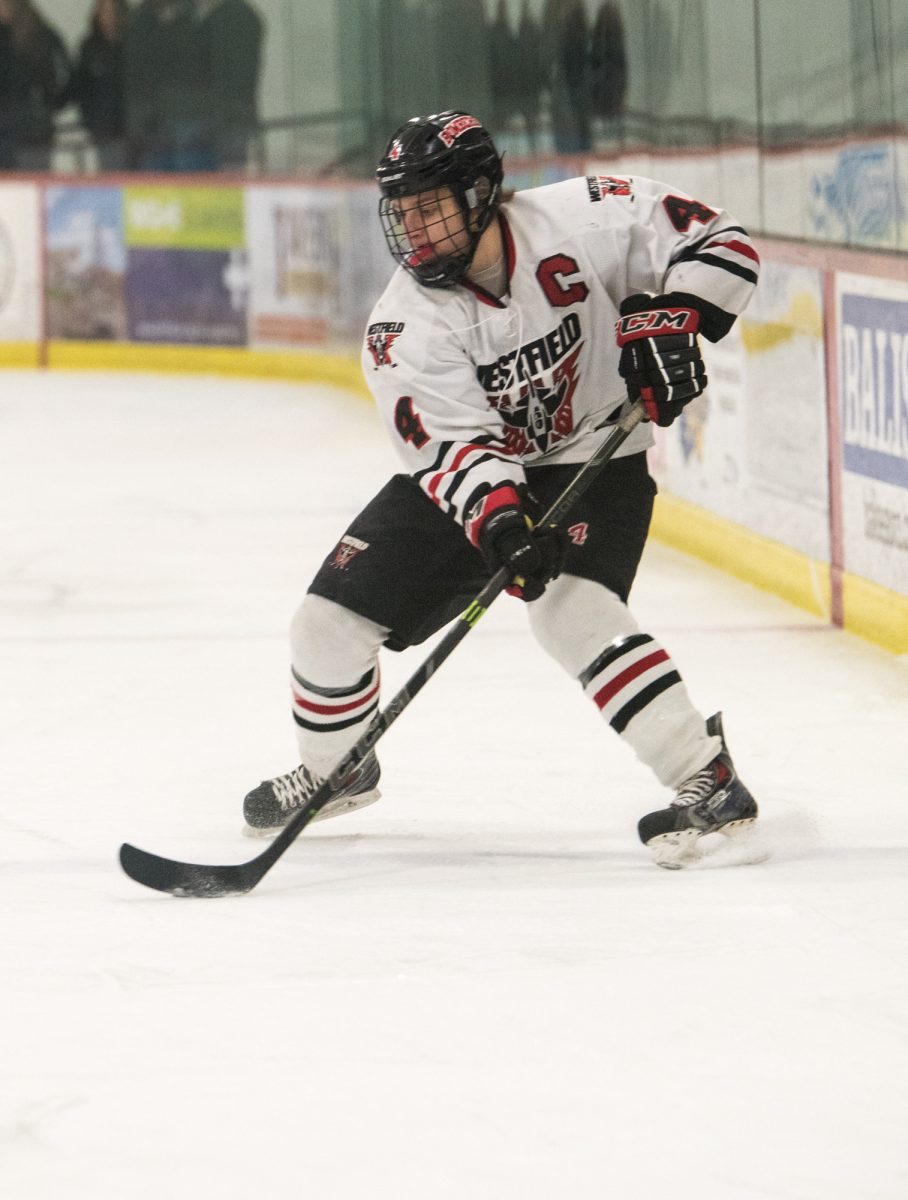 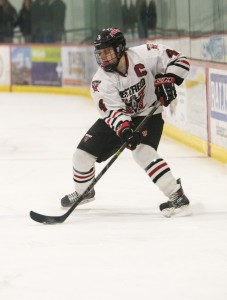 WESTFIELD – The Westfield High School boys’ ice hockey team is used to playing in enemy territory. That terrain has somewhat of an unfamiliar feeling though this season, especially during the stretch run.
For several years now – a period that stretches more than a decade and encompasses several Division 3 Western Massachusetts and state championships – Westfield has been the gold standard for hockey in the western half of the state, save for Division 1’s Cathedral Panthers. The Bombers have typically approached the season’s final weeks as a tune-up for a postseason run, but this season they are feeling a little bit more gassed.
“I feel sorry for the kids – they’ve been working so hard,” said longtime Westfield High School boys’ ice hockey coach C.B. “Moose” Matthews, whose team improved to 6-9-1 overall with a 2-0 win over Wachusett Saturday. “Nothing has been going right for us.”
Coach Matthews said his players have put themselves in position to score – the puck just is not finding the back of the net.
“We go down the ice, hit the pipe,” Matthews said in describing his team’s struggles to find offense this season. “We’ve got a guy out front of the net, there’s a cross in the slot, but we can’t tip it in … They’re skating hard, doing the right thing – we just can’t score.”
“Maybe we can change that around in the last two weeks and we will come on strong,” he added.
An offensive surge could come in handy when Westfield takes on league foe, East Longmeadow (11-4-1, 7-1-1), in a key showdown Tuesday night at the Olympia Ice Center in West Springfield at 7.
Westfield has just two league contests remaining, the other being Ludlow (3-11-1, 2-7), before closing out the regular season against Beverly and Acton-Boxboro. The Bombers currently reside in fourth place in the Berry Division at 3-7. Agawam (11-3-1, 2-7-1) and West Springfield (6-10-1, 2-7) are in fifth and sixth place in the standings.
Westfield will likely slip into the playoffs (and be one of the top four teams) with a win over East Longmeadow or Ludlow. The Bombers would be guaranteed a spot with wins over both teams, or go 3-0-1 over their final four games.
“We’d rather have to fight to get into the playoffs than just walk in like we used to,” coach Matthews said.
No matter whether the Bombers run, fight, or skate to get into the postseason, it is truly time to see if they can walk the walk.
In Division 3A, St. Mary (8-8-1 overall, 5-7-1 Fay-Wright) will be tasked with a three-game road trip, featuring games against Easthampton (Feb. 10), Turners Falls (Feb. 13), and Chicopee (Feb. 20).
The Longmeadow (WHS Co-Op) girls’ ice hockey team has already qualified for the postseason tournament. The Lancers are 11-4-1.

HOOPS HAVEN: Several local high school boys’ basketball teams are fighting for their playoff lives – Westfield (5-8), Westfield Technical Academy (5-9), Southwick (6-9), Gateway (6-7) … On the girls’ side, Southwick (11-3) has already punched its tournament ticket. The Gators (4-10) are mathematically alive.
To qualify for the Western Massachusetts postseason tournament, a team must finish the regular season with a .500 or better record, or first or second place in their respective leagues.
For complete up-to-date listings and standings in the postseason chase, stay with thewestfieldnews.com. 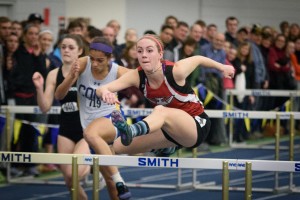 Westfield High School senior track star Morgan Sanders leaps to victory in the 55 meter hurdles at the 2016 Western Massachusetts Indoor Track and Field Championships at Smith College in Northampton. Sanders and the Bombers will attempt to bring home the hardware from the state championships Sunday in Boston. (Westfield News Staff Photo)

CHAMPIONSHIP WEEKEND: A thrilling weekend of high school championships is just a few days away, beginning with Friday night’s MIAA Diving Championships at Springfield College. The competition, featuring divers from all over Western Massachusetts, will begin at 6 p.m. … Then, on Saturday, the MIAA Swimming Championships will overtake Springfield College with the girls’ competition at 9 a.m., followed by the boys’ races at 4:30 p.m. …Also, Saturday, the Westfield High School wrestling team will travel to Central High School in Springfield to compete in the Western Massachusetts Division 1 Individual Championships, beginning shortly after 9 a.m. Southwick will host the D3 championships the same day and time. … Local track star Morgan Sanders will lead Westfield in the state Indoor Track & Field Championships at the Reggie Lewis Center in Boston Sunday.