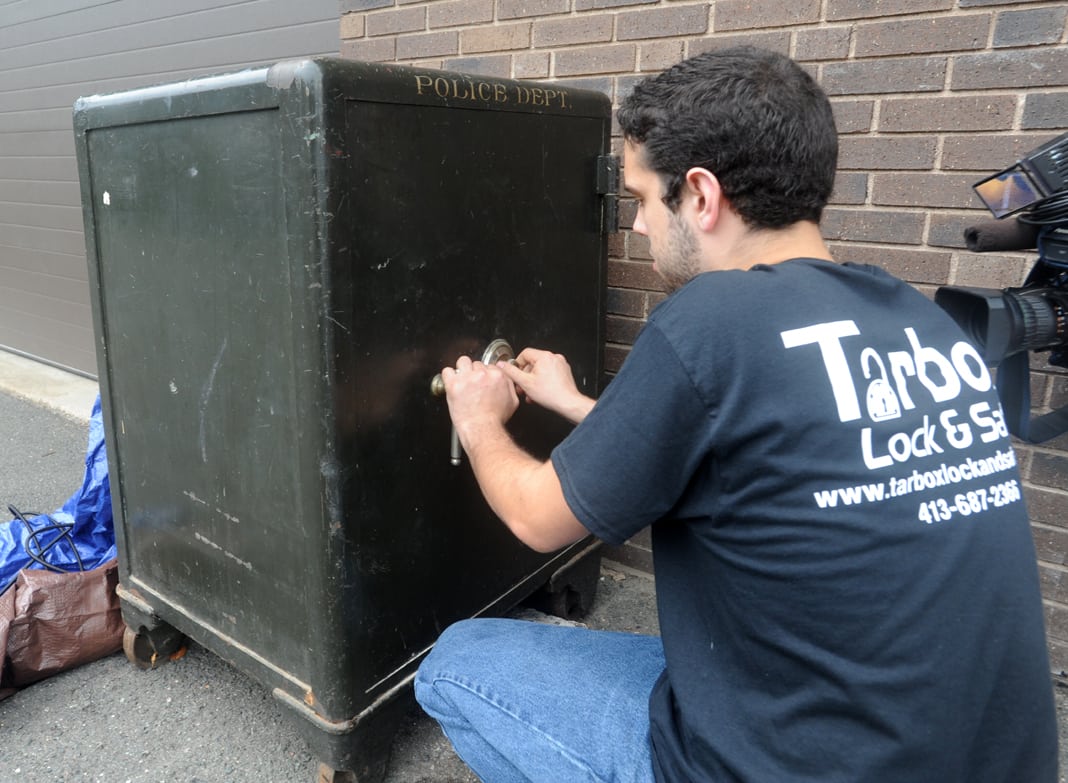 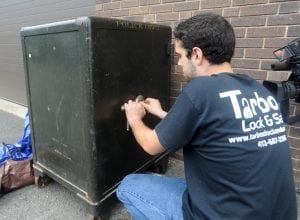 Brandan Tarbox, owner of Tarbox Lock and Safe, opens a safe which he had cracked earlier. The safe had been abandoned in City Hall when the police department moved to the new headquarters building in 1972. (Photo by Carl E. Hartdegen)

WESTFIELD – After more than 40 years, a police department safe was cracked – and found to be empty.
Two other safes of similar vintage, apparently abandoned in City Hall for decades, were also opened and one contained old records.
The safes piqued the interest of city Police Capt. Michael McCabe when the department’s safe became an issue at Moseley School.
That safe had apparently been left at City Hall when the police department vacated the former headquarters in 1972 for the then newly built police station on Washington Street. The combination was not recorded anywhere McCabe was able to find.
During renovations to City Hall several years ago, the safe was stored at Moseley School which is now being transformed into affordable housing.
McCabe said that although he did not expect the safe to contain important treasures “it’s intriguing enough for me to give the go ahead” to open the safe and he began to look for somebody who could do it.
He said that he went to social media platforms to seek volunteers and got several offers. However, he said, he offered one man an opportunity to try, based largely on the man’s name, Tarbox.
Brandon Tarbox, the owner of Tarbox Lock and Safe in Wendell, came to the city to attempt to manipulate the lock and spent “many, many hours”, McCabe said, working with the safe’s dial in an attempt to discover the combination.
Tarbox said that he spent two five hour sessions trying to
crack the safe.
“It turned out to be the most difficult safe I’ve tried to open” he said. “There’s never been a safe that I’ve tried to open that I couldn’t open” he said, “it’s just a matter of time”.
However, after manipulating the safe for hours, Tarbox resorted to drilling a precisely located hole in the door of the safe so that he could insert a borescope and view the tumblers of the lock. Once he was able to view the tumblers as he manipulated the dial, opening the safe was relatively easy.
He then refilled the hole, making the safe once again a formidable deterrent to anyone trying to get into it. McCabe said the thinks the safe weighs “2,000 to 3,000 pounds”.
Tarbox also went to work on two other safes which, McCabe said, had apparently been abandoned by other city departments. Tarbox was able to open one by manipulating the dial and drilled the other to open it.
Tarbox said that it is unusual for him to have to drill a safe and said that he does not use tools for 90 percent of the safes he opens. He said that although he is based in the small town of Wendell, he’ll “go anywhere” there is a client to ply his trade.
McCabe said that one of the City Hall safes was also empty but the other contained records.
He said the records contained documents which were used to commit persons to the former state psychiatric facility in Northampton as well as arrest records spanning the period of about 1885-1920. He said that the leather-bound volumes are, as far as he knows, the only records of the arrests from that time.
“From a historical perspective, it’s a treasure” he said and added “but nobody wants it” as the record of arrests are likely to document embarrassing events most people don’t want to remember.
He said that now that it has been determined that the department’s safe has no relevant documents it is surplus to the department’s needs and will be turned over to the city as surplus property.
He said that he expects the other two safes will also be found to be surplus and said that the city’s purchasing department will decide what to do with all three of them.