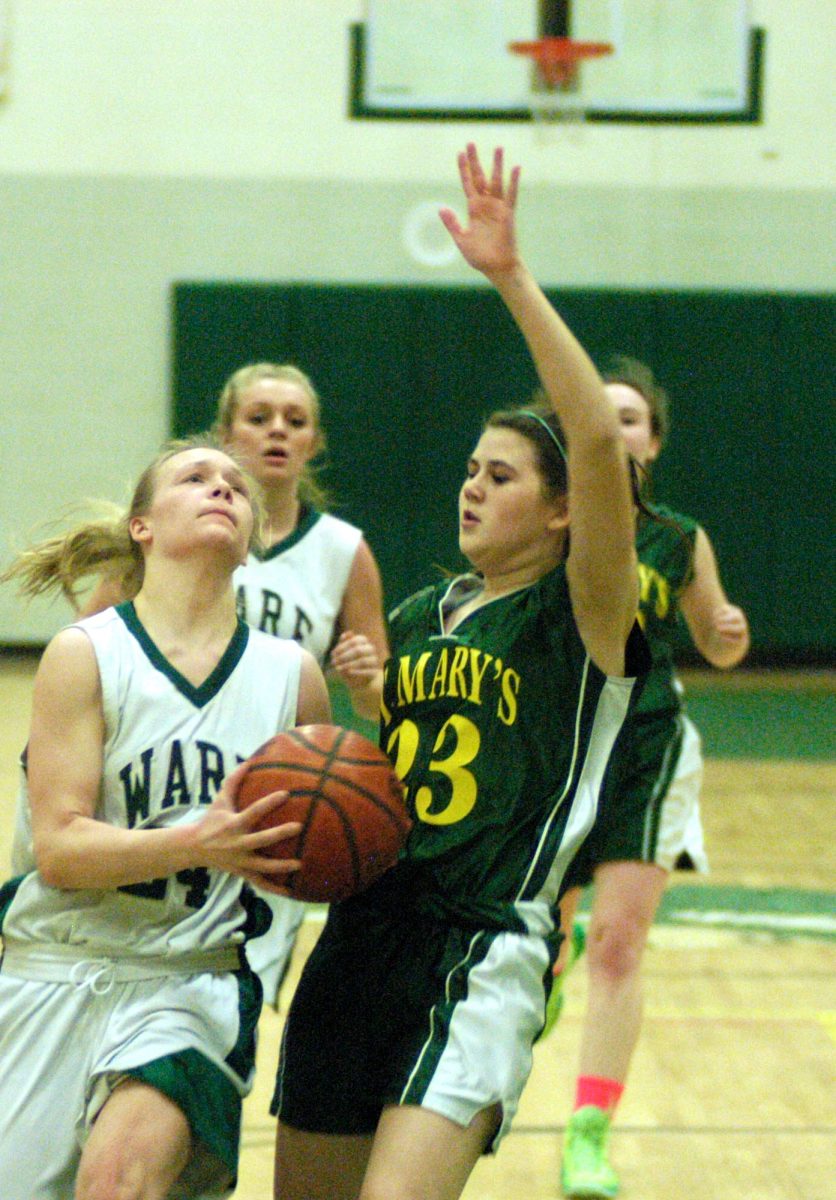 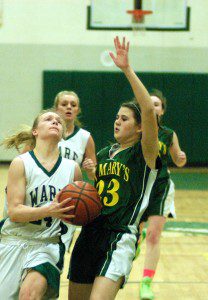 WARE – The St. Mary High School girls’ basketball team stumbled into a bit of a pothole on its road to the championship.
No. 15 St. Mary stumbled in the opening round of the Western Massachusetts Division 4 postseason, losing to second-seeded Ware 54-16 Tuesday night.
Ware’s Sadie Simons put forth a monster effort. Simons recorded a double-double with 24 points and nearly a dozen rebounds. She scored 16 of her team’s first-quarter points as the Indians opened a 22-0 lead over the game’s first eight minutes.
Ware exploded out of the gates, opening with a 32-0 run. The Indians’ defense – applying a full-court press – swarmed the ball, and overwhelmed the Saints. 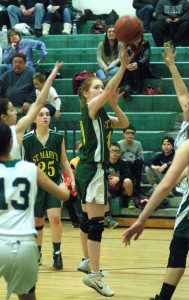 It wasn’t until Stephanie Allen’s jumper rolled around the inside of the rim and fell through with 1:25 remaining in the second quarter that St. Mary managed to score.
The Saints closed out the half on a 4-0 run when Francesca DePergola’s drainied a 2-pointer in the closing seconds.
In the third quarter, St. Mary’s managed to play with Ware. The Indians outscored the Saints just 14-7 in the quarter.
Karissa Foley scored an early bucket for St. Mary’s. Casey Rutledge and Lauren Chapdelaine hit consecutive shots with Chapdelaine’s basket being a smooth 3-pointer.
Alissa Easton nailed the Saints’ final basket, a 3-pointer with 6:44 left in the game. 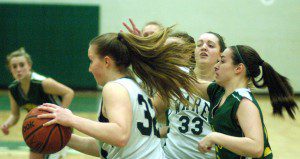 “It’s tough for a small school (like St. Mary’s), that probably graduate 30 kids,” Saints coach Rodney Rodriguez said. “Maybe half of those (30 kids) are girls, and likely only half of those girls played basketball at any other level before high school.”
Still, the second-year head coach who spent several years as an assistant was upbeat after the game.
“One positive was the leadership we had from our seniors,” coach Rodriguez said, referring to seniors Foley, Alison Stanlewicz, Chapdelaine, and Tessa Kielbasa. “They did a great job. These girls just need to be more aggressive and more assertive (on the basketball court) and believe in themselves.”
In other high school girls’ hoops playoff games, No. 6 Athol cruised past No. 11 Southwick, 65-43, behind a 20-point night from Emily Casella.