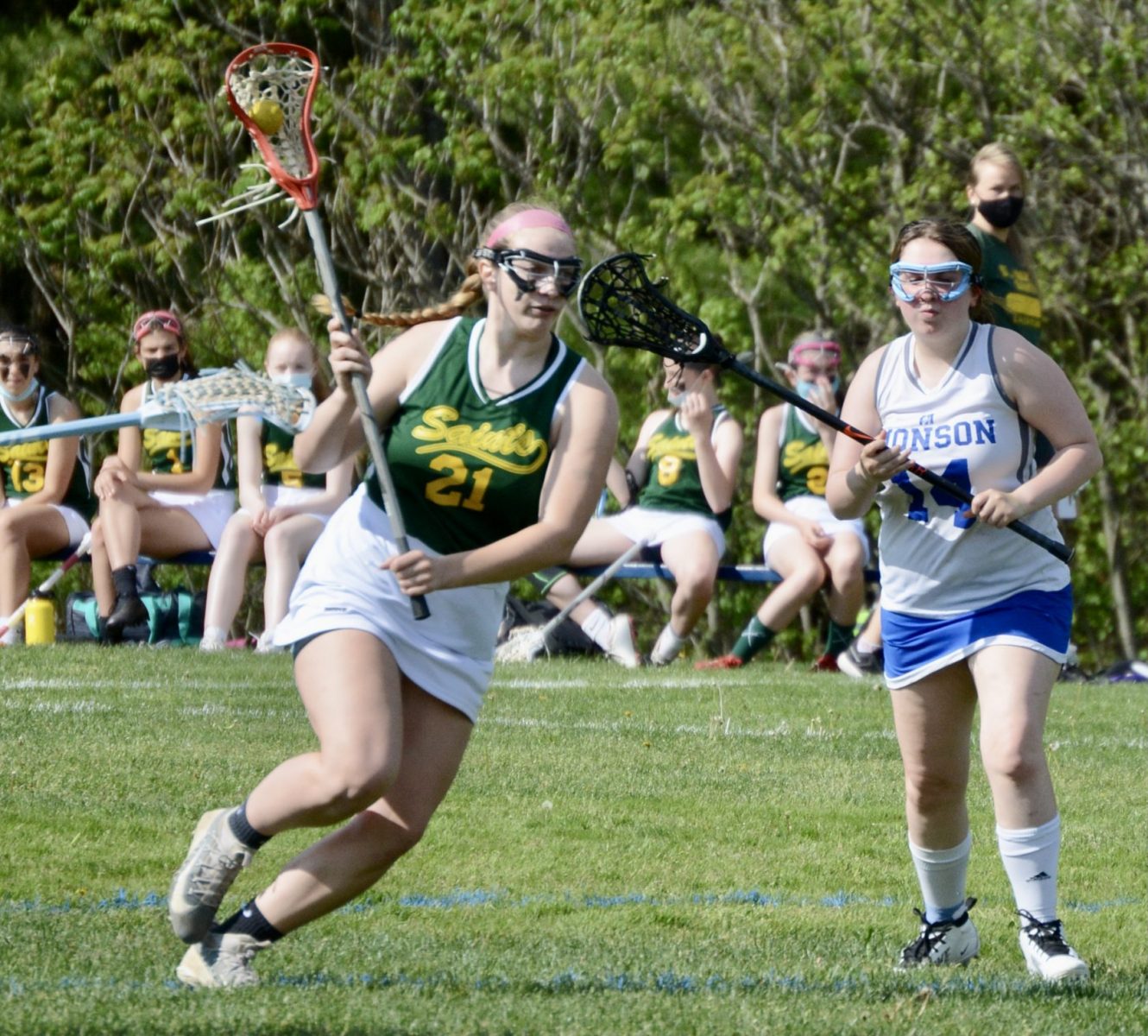 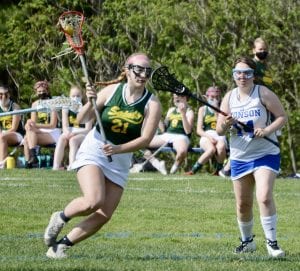 MONSON – St. Mary’s Summer Duda scored in the opening minutes of Tuesday’s high school girls lacrosse contest. Zyna Wisnauckas followed it up for a 2-0 lead. Monson countered with a goal, but the Saints responded when Paighton Ramos found the back of the net.

It was this balanced attack that led to a 7-2 first quarter lead and eventual 17-7 win for the St. Mary’s Saints.

Monson rallied with a 4-1 second quarter comeback, pulling to within 8-6 at the half. St. Mary’s responded with a seven-goal, third quarter explosion that determined the final outcome.

“It was great to see all of our girls successfully receiving passes and defending our goalies today,” St. Mary’s girls lacrosse coach Grace Ahrensdorf said. “We’ve certainly still got work to do to keep the ball off the ground and hold onto possession whenever we get it, but I’m psyched to see my girls hard work these past couple of years earning them some early wins this season.”

Abby Hennessy had three first half saves for St. Mary’s. Saints’ Mia Slack had one on the second half.

Franklin Tech rallied for five runs over the sixth and seventh innings forcing extra innings, but the “Cardiac Cats,” (AKA the Westfield Tech Tigers baseball team) won it in extra innings.

Tobey Barlow singled, stole second and third bases, and scored on a Deven Werbiskis sac-fly in the top of the eighth inning. Werbiskis finished 3-for-5 with two doubles, three runs and two RBIs.

Josh Sturmer finished a home run short of the cycle, going 3-for-4 with three runs and a RBI. Dacota Durkee went 2-for-4 with a triple and three RBIs.

Riley Sullivan struck out eight batters in 6 2/3 innings. Barlow allowed not hits, no runs, one walk and struck out one batter in 1 1/3 innings of relief.

The Westfield Bombers have quickly put their season opening loss to the Minnechaug Falcons in the rearview mirror.

Westfield raced out to a commanding 6-0 lead in the first quarter and led 15-0 at the half. Northampton scored its lone goal in the fourth quarter.

Westfield rallied from an 11-1 deficit, but fell just short in the end.

Franklin Tech built a 7-0 lead through three innings and cruised to a mercy-rule victory. Taylor Parker went 2-for-3 for Westfield Tech with one RBI. Tigers’ pitchers Allyssa Slack struck out six batters.

O’Neill was unstoppable, crushing forehands and backhands to keep her opponent at bay. Piziak played a long first set, and then upped the pace in the second set. Seklecki played a solid two sets of tennis hitting her forehands with power and precision to win.

Westfield starting pitcher Brian Strange scattered three hits over six innings. He struck out 12 batters, walked two, and allowed three runs, one of which was unearned. Josh Mayo provided an inning of scoreless relief for the Bombers. He did not allow a hit or a run, retiring three of the four batters he faced, two via strikeout.