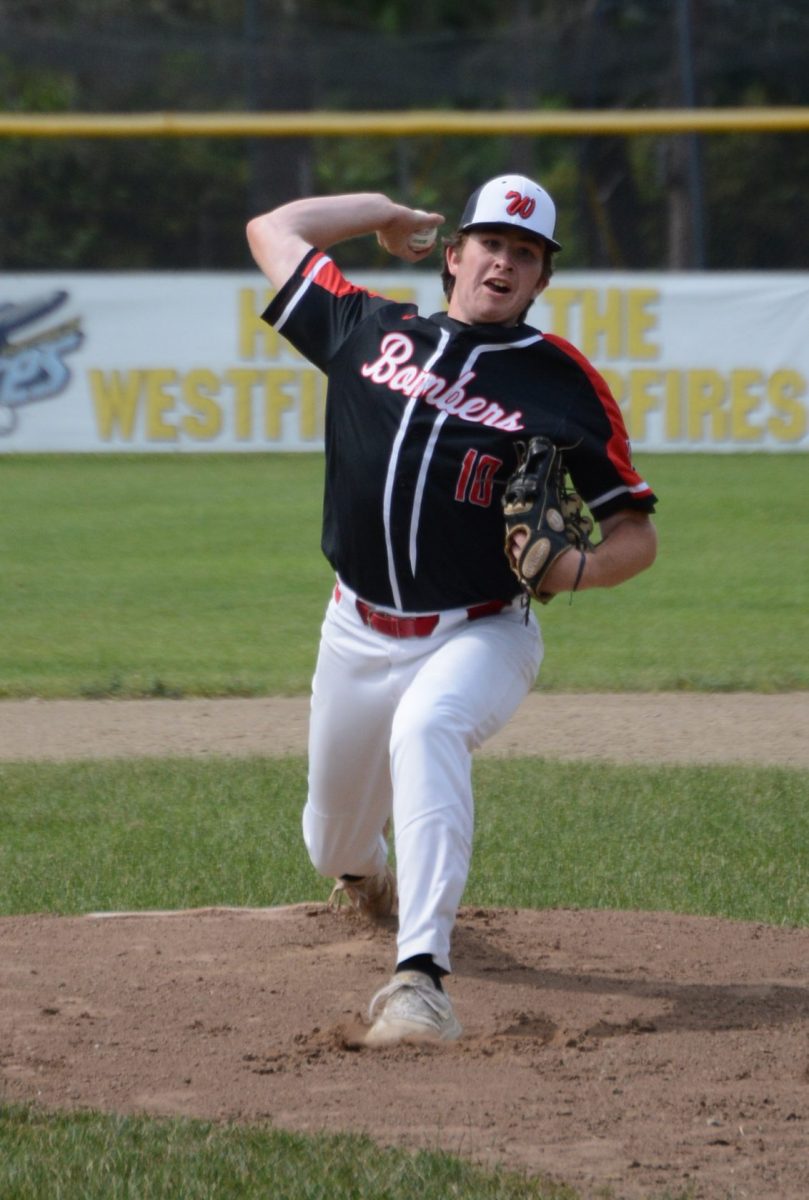 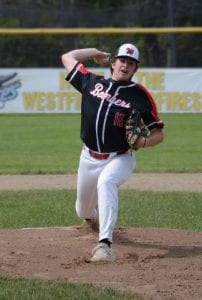 UPDATED 6/21
WESTFIELD – The Westfield High School baseball team’s tournament opener got off to a fast start Friday night with some pop and an unfortunate circumstance.
Westfield’s David Tirrell homered and drove in three runs and pitcher Josh Mayo struck out nine batters over five innings before the West Division 1 tournament first round game was suspended due to a few unruly fans. The game resumed Saturday morning without spectators and the Bombers leading 4-0 over No. 11 Chicopee Comp. The Colts lost 5-0.
Westfield took a lead in the second inning of Friday’s contest, following a walk from Andrew Florek, a single from Brian Strange and a sac-fly from Tirrell that resulted in two runs. Tirrell led off the fourth inning with a 335-foot home run over the right field fence.
In the fifth inning, Alex LaCourse doubled to go 3-for-3 at the plate. Florek drove him home with a run-scoring single to right center field. 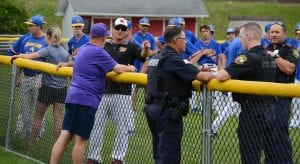 The Westfield Bombers and Chicopee Comp Colts meet in the outfield grass, along with Westfield Police during a delay in a West Division 1 baseball tournament game Friday night at Bullens Field. The game was held up due to a few unruly fans, and eventually suspended in the bottom of the fifth inning. The game was completed Saturday morning without spectators. (CHRIS PUTZ/THE WESTFIELD NEWS)

It was at that point in the game that a few unruly fans interrupted the game. According to reports, the incident stemmed from some derogatory comments and racial slurs uttered at a Chicopee Comp player. Several Colts players jumped over the center field fence to defend their teammate, but before anything could escalate any further, the guilty parties drove away. Police responded and peace was restored. Several players from both teams, along with coaches showed support for one another in the outfield grass before departing.
“Incidents like these are incredibly sad,” Westfield High School athletic director Ryan Dunphy stated. “The actions of this fan or fans cause immense feelings of anger. I feel for the player affected, and they are not representative of the Westfield High School athletics program. No one should ever have to be subject to this. We are treating this matter seriously and immediately ejected anyone who was using poor sportsmanship that is not aligned with MIAA guidelines.”
“I commend the actions of the Chicopee Comp staff and team for protecting and consoling their teammate, as well as the Westfield coaching staff who was there in support of the player and team,” he said.
As for the game itself, Westfield was red-hot, especially Tirrell, who clubbed his first career home run.
“We finally hit the ball well,” Tirrell said. “Everyone knows the story. We have a lot of pitching. We haven’t been hitting the ball great. …but we came back out swinging. I had one pitch I was looking for first pitch. He gave it to me. I drove it both times deep to right field. Had people on base to be able to get the RBIs.”
Mayo was stellar, allowing just one hit. He retired eight straight batters to begin the game and seven in a row before play was halted in the bottom of the fifth.
“I was just doing what I normally do,” Mayo said. “Curve was feeling nice; my fastball was locating good spots.”
Jake Jachym closed out the game Saturday with two innings of scoreless relief. Jachym allowed one hit and had four Ks. Jachym also drove in a run late in the game. 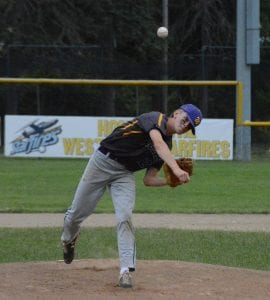 Westfield Tech’s offense came from all throughout the lineup – – Deven Werbiskis (RBI double), Josh Sturmer (sac-fly RBI), Dacota Durkee (2-run single), Zabielski (sac-fly RBI, RBI single), Evan Grant (RBI single), Ryan Major (RBI single), and Ayden Richter (2-run single) drove in runs. Darin Towle went 2-for-3 with a double. He was also hit by a pitch.
“I was thinking I had to throw a lot of strikes and I think I did that so that was huge,” said Zabielski, who needed just nine pitches (3 Ks) to get out of the first inning. “We had to come out strong so we did.”

CENTRAL-WEST DIVISION 1 GIRLS LACROSSE TOURNAMENT FIRST ROUND
No. 11 East Longmeadow 11, No. 6 Westfield 10 (OT)
No. 11 East Longmeadow (4-9) stunned Westfield (6-5) in the first round of the Central-West D1 Girls Lacrosse Tournament, upsetting the sixth-seeded Bombers in overtime.
“We’re going to learn from this and hopefully drive us going forward next year,” Westfield High School girls lacrosse coach Paul Fenwick said.
Westfield’s Lara Finnie scored four goals, including the 100th of her career, Emma Metcalf scored four goals, and Sydney Goyette had two. Finnie and Metcalf scored the 100th point of their careers during a regular season contest this past season.

WEST DIVISION 2 SOFTBALL TOURNAMENT FIRST ROUND
No. 4 Southwick 14, No. 13 Palmer 2
Southwick improved to 13-1 this season with a convincing victory in the first round of the West Division 2 Softball Tournament. Palmer fell to 4-9.

No. 12 Mohawk 12, No. 5 Gateway 6
No. 12 Mohawk (5-10) upset fifth-seeded Gateway (7-4) in the first round of the West Division 3 Softball Tournament. Gateway’s Nicole Hannigan, who tossed a no-hitter in the final game of the regular season and was a bright spot for Gateway all season, went 2-for-3 at the plate Friday with a double, run, and RBI. 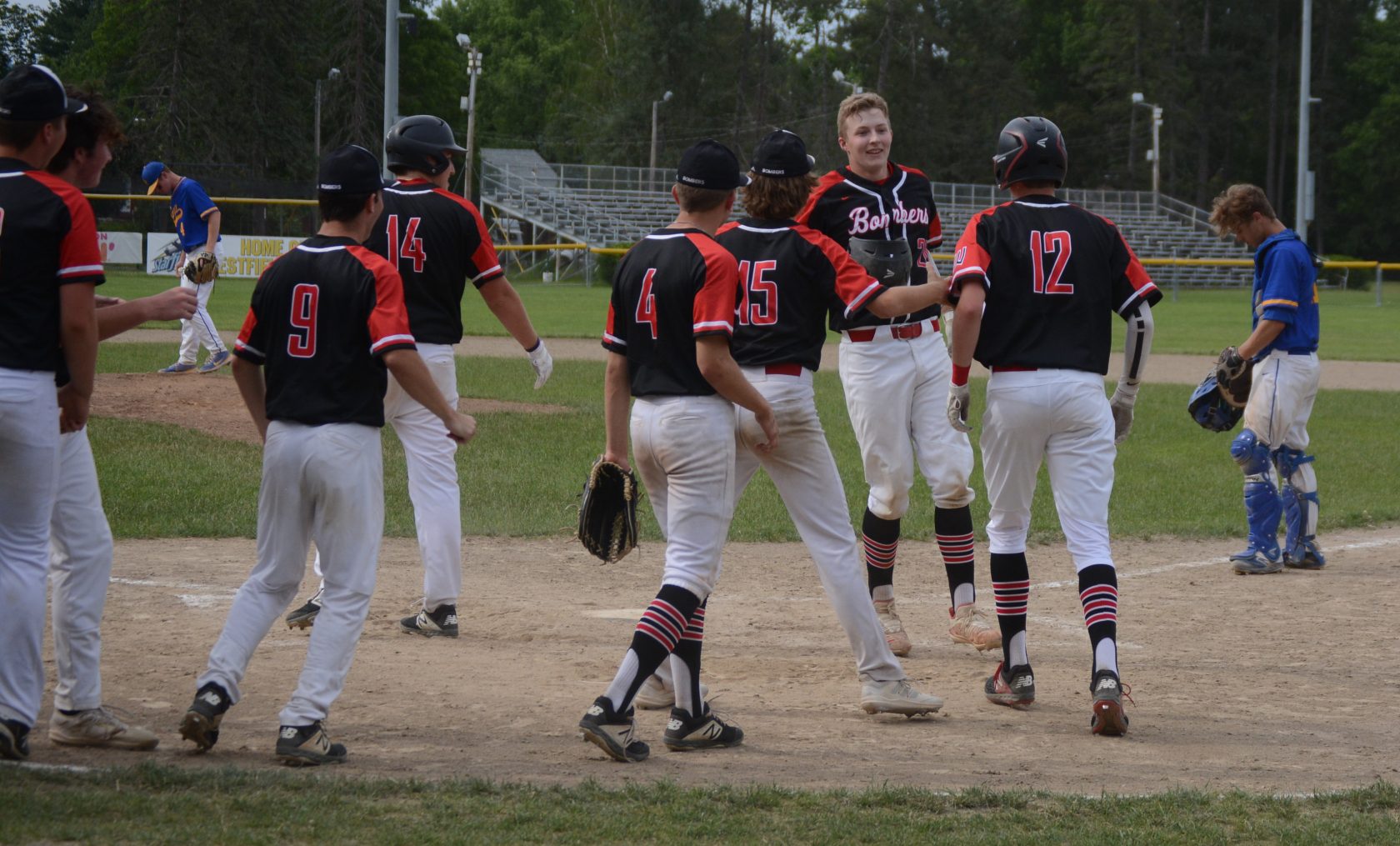 Westfield’s David Tirrell is greeted by teammates at home plate after Tirrell clubbed a solo home run in the bottom of the fourth inning to give the Bombers a 3-0 lead in a Division 1 baseball tournament opener Friday night at Bullens Field. (CHRIS PUTZ/THE WESTFIELD NEWS)