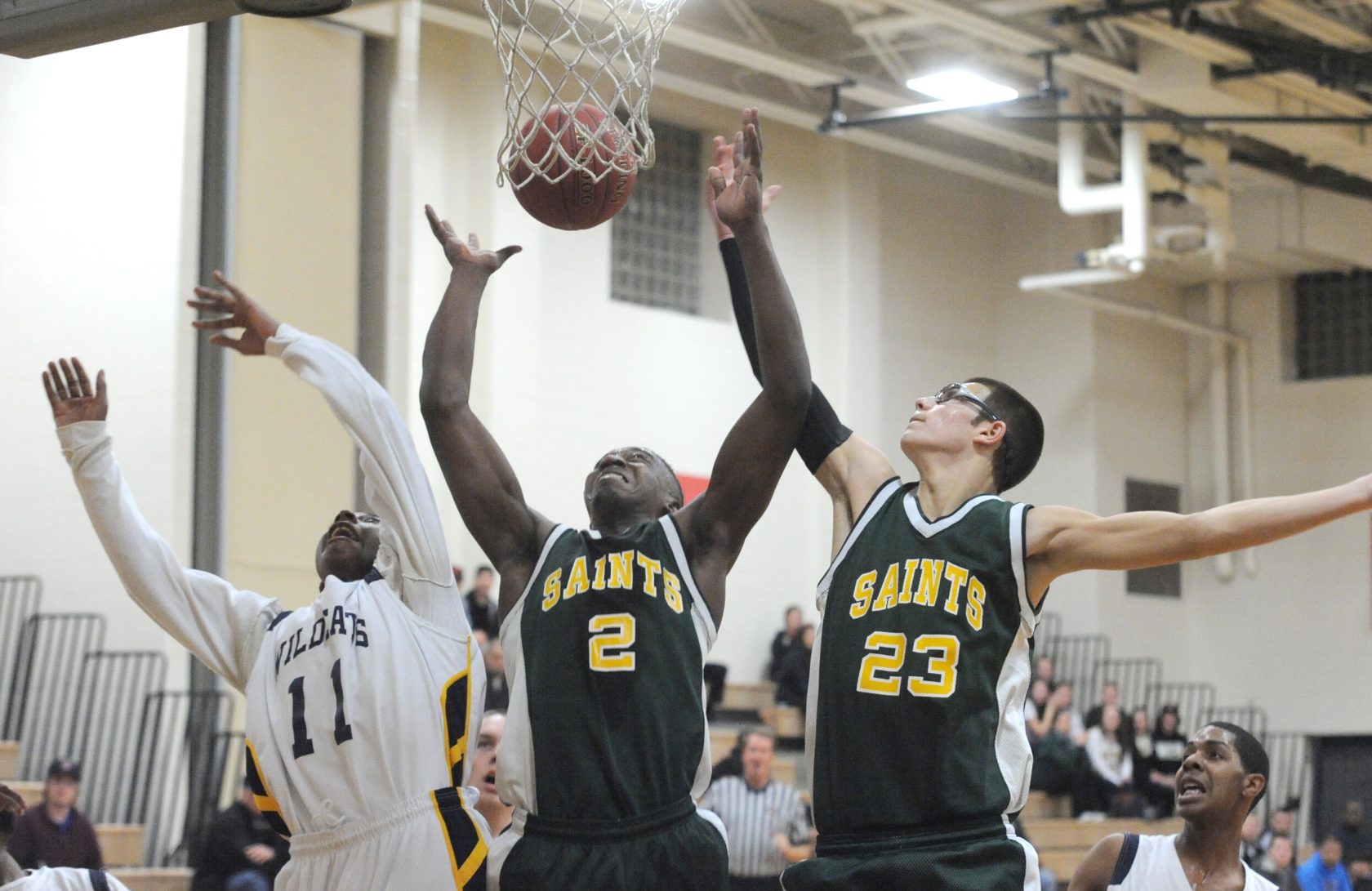 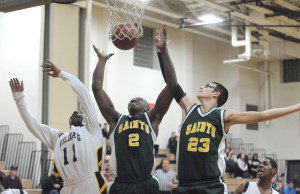 SPRINGFIELD – The St. Mary High School boys’ basketball team’s postseason run came to a crashing halt.
St. Mary seniors Justin Crosby (24 points) and Matt Plasse (23) combined for 47 points, but the rest of the team shot a combined 14 points as the 12th seeded Saints fell to host No. 5 New Leadership in the first round of the Western Massachusetts Division III tournament, 76-61.
St. Mary (15-6) had a hard time with the speed and athleticism of New Leadership (9-12). The Wildcats effectively spread the ball on offense, and pressured the Saints on defense from time to time.
Marcus Walker and Joseph Crapps scored 20 points apiece to lead New Leadership. Wildcats’ Levi Huddleston and Talon Brown finished with 11 and 12, respectively. David Pacheco had nine.
Crapps and Brown helped fuel New Leadership’s 12-0 run to begin the game. Both players made 3-point plays during the streak, with Crapps’ score coming the old-fashioned way on an and-one.
New Leadership maintained a double-digit lead throughout the first three quarters, until Plasse got hot from beyond the arc.
Plasse struggled from long range in the first half, but managed to hit three 3s in the third quarter. The lanky senior forward opened the fourth quarter with a 3-pointer to cut the deficit to single digits for the first time. He made consecutive 3s – following a Crosby 2 – with just under six minutes remaining to rally the Saints to within 58-51.
St. Mary had a chance to trim New Leadership’s lead to six, but the Saints missed two free throws. As a team, they were just 5-of-12 from the foul line.
New Leadership took advantage of the misses, and scored the next seven points. Walker made three baskets to push the lead to 66-51. It was too much for St. Mary to overcome.
NOTES: This is New Leadership’s final basketball run as the school announced plans to close recently.
ON DECK: Next up for local fans are Division II postseason games featuring the Southwick-Tolland and Gateway Regional girls’ basketball teams. On Tuesday night, No. 12 Southwick (10-10) plays at No. 5 Belchertown (14-6), and No. 5 Gateway (16-4) hosts No. 12 Pioneer Valley Christian School (10-10). Both contests are scheduled to tip off at 7.
HOCKEY POSTSEASON ANNOUNCED: The Westfield High School hockey team (14-2-2) earned the top seed in the Division III tournament, and will receive a bye. Westfield will play the winner of No. 4 Ludlow (9-10-1)/No. 5 West Springfield (11-9) on Sat., March 2 at the Olympia in West Springfield, beginning at 3:30 p.m.