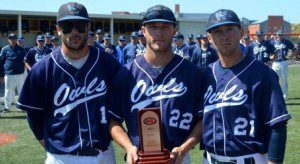 SALEM – Freshman Sean Buckland (Lynn, MA) fired a complete-game three-hit shutout to lead Salem State to the 2013 Massachusetts State Collegiate Athletic Conference Baseball Championship with a 5-0 victory over Westfield State on Sunday.
The Vikings (25-13) claimed the program’s second MASCAC Tournament title, and first since 2006. The young Westfield squad finished with a 19-21 overall record.
Buckland turned in a stellar performance, allowing three hits and two walks, and striking out four to help the Vikings complete a three-game sweep in the tournament.
Salem State got going quickly as Kevin Salines (Melrose, MA) singled, stole second and came home on a hit by Brett Cahill (Gloucester, MA) in the bottom of the first.
Owls’ starter John Silva (Rehoboth, MA) was replaced by Pete Liimatainen (West Barnstable, MA) in the third inning after balking Steve Buitkus (Reading, MA) to third, after the senior captain and tournament MVP had singled and stole second. Salines delivered an RBI single to plate Buitkus, and the Vikings led 2-0. Silva pitched two innings, and gave up two runs on four hits with two strikeouts.
Buckland did not allow a base runner until the fourth when Andrew Medeiros (Acushnet, MA) ripped a double to leftfield. A steal by Medeiros and an intentional walk to Kevin Greene (Worcester, MA) put runners on the corners, but Buckland worked out of the jam when first baseman Matt Burgess (Kingston, MA) ended the threat when he made a nice over the shoulder catch on a ball hit into foul territory behind the first base bag.
Burgess padded the lead in the fifth, with a ground-rule double that plated Salines that put the Vikings up 3-0. Dan Whigam (Barre, MA) came on in the seventh to pitch for Westfield State. Liimatainen pitched five innings, and allowed five hits, a run and had one strikeout.
Salem State added two more runs in the seventh without the benefit of a hit. Two hit batters, and an intentional walk to Richard Fecteau (Newbury, MA) loaded the bases. Relief pitcher Curt Everett (Lexington, MA) walked Kyle McElroy (Newburyport, Mass.) to plate the first run, and a passed ball scored Cahill to put the Vikings up 5-0.
Buckland retired the side in order in the ninth to record his third victory of the season against just one defeat.
Vikings’ right fielder Steve Buitkus (Reading, MA) was named the MVP of the MASCAC Tournament, after going 2-4 with a run and two stolen bases. Salines went 3-3 from the plate while scoring twice.
Pat McWilliams collected two of Westfield’s three hits.
Salem State has now won six MASCAC titles, and will travel to Harwich, Mass. which will host the Division III New England Baseball Regional, at Whitehouse Field from May 15-19.