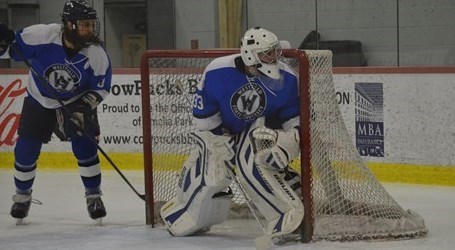 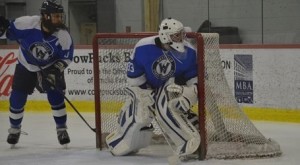 SALEM – Jason Pucciarelli (Newmarket, Ontario) made 19 saves and John Needham (Medford, Mass.) tallied the only score of the game in the second period as the #2 seed Vikings slipped past #6 seed Westfield State 1-0 in the semifinals of the Massachusetts State Collegiate Athletic Conference Tournament. With the win, Salem State will now go to top seed Plymouth State on Saturday evening for the championship game with the winner garnering the conference’s automatic bid to the NCAA Tournament. This will be the fourth straight year, and fifth time in the past six seasons that the Vikings and Panthers will meet for the conference title. The two teams are tied 2-2 in the postseason with Salem State claiming the championship in 2016 with a 4-0 win.
After a scoreless first period, Needham beat Westfield State netminder Jonathan LoParco (Vaughan, Ontario) on a nice feed from Casey Miller (Billerica, Mass.) four minutes into the second period.
Pucciarelli made that lead stand as he made multiple clutch saves to keep the Vikings in front. Late in the second period, the Owls gained their best scoring chance as Pearce Vance (Berkley, Mich.) took charge on a breakaway and rifled a shot glove-side towards Pucciarelli, but Pucciarelli stoned Vance to keep the game 1-0. In the third, Westfield State nearly tied the game when Jackson Leef (Fort Wayne, Ind.) rifled a one-timer that just missed a wide open net.
The Vikings used an aggressive fore-check in the final minutes to keep the puck in their zone to prevent the Owls from emptying the net late, as Salem State was able to run out the clock and advance to the conference final.
The Vikings (14-9-3) outshot the Owls 27-19. LoParco played well in the loss, stopping 26 shots for the Owls, who end their season with a record of 11-15. – Courtesy of Westfield State University Sports