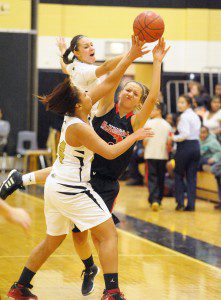 SPRINGFIELD – Westfield pulled within two points of a tie late against Central on the road in a high school girls’ basketball game before falling, 66-55.
Westfield’s Beka Santiago (22 points, 7 rebounds) and Alicia Arnold (21 points) outscored Central’s top duo of Janea Bunn (17 points) and Alayah Sweeney (14), but struggled from the foul line.
Westfield was just two points short of a tie, before Central won the free throw battle late. The Bombers made just 8-of-20 from the foul line, while the Golden Eagles finished 18-of-36.
“We just didn’t shoot our free throws well,” Westfield coach Ralph Loos said. “The kids played unbelievable. We had a chance to win it in a tough building. I’m really proud of them.”
Sophomore Alexa Morin also delivered a solid effort for the Bombers (1-1). Morin scored just four points, had double-digit rebounds, and made multiple blocks.
“Alexa stepped up as a sophomore and had a really good game,” Loos said. “She played really well, especially defensively.”
It was the first of a three-game stretch in four days for Westfield. The Bombers travel to Chicopee Comp Wednesday and host Amherst Thursday. Both games are at 7 p.m.