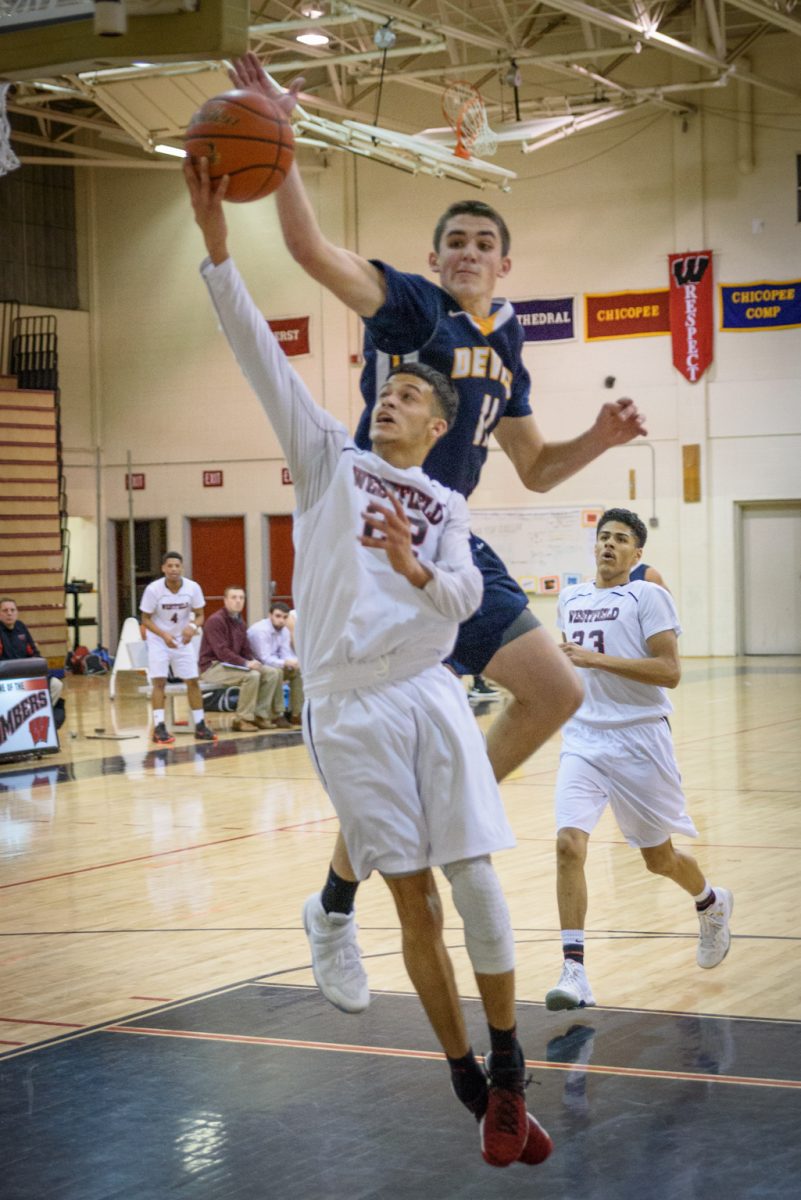 WESTFIELD – It is apparent that the Westfield High School boys’ basketball team has saved the best for last.
Westfield came together for one of its largest victories of the season Tuesday night, a stunning 69-56 win over visiting Northampton. The Bombers’ 17-0, second-quarter run – also a season-best – proved to be the difference.
“We wanted this more than anything,” said Westfield guard Rodney Bernard, who finished with a game-high 21 points. “We have faith that we are going to make the playoffs.”
Westfield ran its record to 8-9 overall. The Bombers need just two wins in their final three games to earn a tournament berth.
Northampton (12-5) has already earned its spot in the postseason.
“Northampton is a very good team,” Westfield coach Joe Balestracci said. “They are well coached and play hard. Our goal was to make some shots, play some ‘D’ and see if we would get to be where we needed to be.” 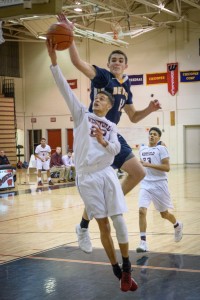 Northampton attempts to block this shot by Westfield guard Rodney Bernard. Bernard went on to score 21 points in leading the Bombers to victory Tuesday night. (Photo by Marc St. Onge)

Both teams’ offenses sputtered early, but Westfield exploded in the second quarter.
Scott Walsh got it started with a two-point basket to cut Westfield’s early second quarter, four-point deficit in half, pulling his team within 16-14. Aidan Dunn (9 points) followed with another two as the Bombers began to build momentum.
Westfield continued to string together one point after another. Gabe Piepergerdes (15 points) dropped in three straight buckets, including two 3-pointers within a 22-second span. Bernard made 3-of-4 free throw attempts, courtesy of a technical foul. A Javier Santos’ two completed the 17-0 run. The Bombers led 29-16.
“That gets everybody hyped,” Piepergerdes said of the offensive outburst, noting the infectious play among his teammates and how they fed off the energy of the crowd. “We were just cruising from there.”
Westfield held a double-digit lead for much of the remainder of the contest, even building a 21-point lead early in the third quarter after a Bernard three.
Northampton went on a 9-0 run to pull within 45-33 with just over four minutes remaining in the third quarter, but a steal and lay-in from Bernard with 3:19 left put momentum back on Westfield’s side.
Northampton cut its deficit to single digits with five minutes remaining in regulation. A big 3-pointer from Piepergerdes and three made free throws by Dunn – he was fouled shooting from beyond the arc – sealed the victory.

Tigers rally past Saints
Westfield Technical Academy 69, St. Mary 51
Westfield Tech rallied from a 14-2 deficit to defeat St. Mary on senior night. The Tigers received major contributions from several players.
Mark Klyuchits led Westfield Tech with 14 points, Tyler Starzyk scored 12, Skyler Bishop notched a double-double (11 points, 15 rebounds), Vlad Biley finished with 10 points and nine assists, and Tim Shevchenko chipped in nine points and nine boards.
“I give St. Mary’s a lot of respect,” Westfield Tech coach Kyle Dulude said. “They came out hard at us in the beginning and kept fighting.”
We had a very slow start not playing for six days,”Dulude added. “Our kids picked up some energy out of nowhere.”