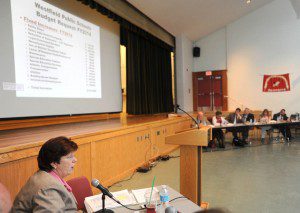 Suzanne Scallion, foreground, superintendent of the Westfield Schools, discusses aspects of the school department’s proposed budget which are displayed for the members of the school committee, background, school officials and members of the community at a public hearing on the budget last night staged at the Westfield Middle School South auditorium. (Photo by Carl E. Hartdegen)

WESTFIELD – The School Committee conducted a public hearing last night at the South Middle School where Superintendent Suzanne Scallion presented details of the proposed 2014 fiscal year budget.
Scallion said she submitted a “needs” budget of $56,045,432 to Mayor Daniel M. Knapik who is preparing the city’s budget which will be presented to the City Council in May. Knapik cut the school budget to $55,509,859, leaving a funding gap of $535,573. The proposed budget is based on conservative estimates of Chapter 70 and other school funding contained in the state budget now under consideration by the Legislature.
Scallion warned that the “shortfall” could rise to more than $800,000 depending on the numbers that come out of the legislative process and the final budget package approved by the House and Senate.
The current 2013 fiscal year school budget is $54,430,442 and Scallion said the district identified a $1.6 million fixed increase, with about $1.34 million of that increase in contractual obligations for staff salary, longevity and step increases. Other major cost factors include $457,000 for special education tuition and services, and $513,000 in additional transportation costs.
Scallion said the School Committee will be asked to approve using reserve revenue to offset some of the spending increases.
The off-sets, which total $2,568,514, include both the use of special revenue and some cost-avoidance savings.
The district will request the committee to vote to commit $800,000 in School Choice revenue to the 2014 FY budget, $1,141,718 in Circuit Breaker funding, with $691,718 coming from the 2013 FY budget and $450,000 coming from the projected state Circuit Breaker revenue during the 2014 fiscal year.
The district is also currently “sweeping” the 2013 budget looking for funding remaining in accounts that can be applied to cost factors in the proposed 2014 budget. The district is allowed under state law to “pre-pay” certain expenses, such as special education out-of-district tuition.
Scallion said the district’s special education autism program, launched this year at Juniper Park School, has resulted in an out-of district tuition cost avoidance of $180,000 and that the program will be further expanded to keep a greater number of students in the district with their peers, a substantial educational and emotional benefit for those children.
Committeeman Ramon Diaz Jr., questioned the decision to commit $800,000 in School Choice funding to the 2014 budget, which the district also did for the 2013 budget, asking if that would drain the reserve fund often used during the course of the year for unanticipated needs, such as maintenance and capital equipment repairs, as well as allocations to school principals for education programming and technology improvements.
Scallion said the district anticipates a School Choice revenue stream of about $1 million.
“So the answer to that question is that there will be a couple of hundred thousand dollars available to take care of emergency situations,” Scallion said.
Scallion said the proposed budget is a 1.3 percent increase, but that based on the education needs, she could have justified a 10 percent increase request. Scallion said that as part of her budgetary process she requested principals to submit “need-based” funding requests that include money for new text books, technology and software.
“We are a level 3 district,” Scallion said. “We should aspire to be a level 1 district. That goal should be the focus of everything we do.”