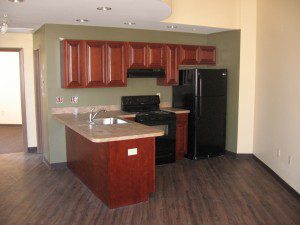 WESTFIELD – The building at 27 Washington Street once was home to Westfield State Teachers College Students and will soon be home to Westfield State University students.
The building, design by Architect Eugene C. Gardner, was originally constructed as a teaching school, one of the two buildings of the Westfield State Teachers College campus. The other building is now the Westfield City Hall at 59 Court St.
This fall Westfield State University students will take up residence in the building that has been completely renovated to bring it into compliance with city and state building and fire codes.
Frank Fitzgerald, director of brokerage services for the Opal Real Estate Group, said the massive renovation project will be completed in mid-August and the building opened for occupancy in September as WSU students return for the 2012-2013 academic year.
Fitzgerald as the four-story building is comprised of 22 residential units, a laundry area, a student study area as well as several vending areas. The building will have a capacity of housing up to 114 students.
The renovation work began in December of 2012 when the structure, which was unoccupied for more than a decade, was remediated to remove mold and allow construction workers to begin gutting the interior.
“It’s on the National Registry of Historic Buildings, so we were limited in what we could do to the exterior envelope,” Fitzgerald said. “We did do some repair to the masonry, repointing the brick, but that had to be approved by the national Park Service, which oversees the buildings on the Historic Registry. The grout we used had to be approved by the park service. It took four attempts to get the exact match.”
The renovation presented a challenge in that the windows, original to the building, could not be replaced with modern energy efficient windows.
“We removed each window which was taken off side to a facility on Mill Street in Springfield where it was deleaded, then repainted and put back into this building,” Fitzgerald said during a Friday tour of the building. “After the original window was reinstalled we put in an interior storm window.”
“In just about nine months, everything will be done,” Fitzgerald said. “We want everything set for student occupancy when they return to the university on Sept. 1.”
“We added a structural element during the renovation. There’s a lot more structural steel, a new fire suppression system,” he said.  “Each unit has its own electrical and climate control system.”
The building will be managed through University Housing LLC. Students will sign a nine-month lease, September through May, at a cost of $800 a month. Accommodations can also be arranged for students who need a 12-month lease.
“That a cost of $7,200 for the nine-month lease, which is a little less than what it costs to live in one of the newer dorms on Campus,” Fitzgerald said. “Our agreement with the university is that we open it to all of the students. If programs on campus want to reserve a block of space for specific groups, such as veterans, athletic team members or nursing students who often need to work night shifts and sleep during the day, we’ll do that too.”
“The Residential Life Department will refer students to us, but they already do that for all off-campus housing.” Fitzgerald said.
The building will be staffed with a full-time Resident Adviser, who will assist students, as well as having direct contract with management to resolve building-related maintenance issues.
Fitzgerald, a resident of Wilbraham, will also maintain an office at the building, to facilitate maintenance and deal with students.
“We want to create a community environment,” he said.