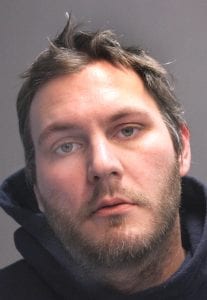 WESTFIELD – A city man got a compelling reason to appear in court Monday when, after being arrested for failing appear for jury duty, heroin was found in his wallet.
Officer Alec Leavitt, while interviewing Jeremy W. Tallis, 31, about an unrelated issue, discovered that Tallis was the subject of an active warrant issued by Springfield District Court for allegedly failing to appear for jury duty.
Leavitt arrested Tallis, of 868 Southampton Road, Lot. 70, on the warrant. He reports that during the booking process a routine inventory of the man’s wallet revealed 11 bags containing, Tallis admitted to Leavitt, heroin.
Tallis was then also charged with possession of a Class A drug.
The penalty provided by law upon conviction of the offense allows for imprisonment for as much as two years and/or a fine of as much as $2,000.
Tallis appeared for arraignment in Westfield District Court Tuesday before Judge William O’Grady and was released on his personal recognizance pending a Feb. 2 hearing.