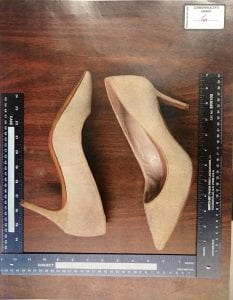 A photograph of a pair of stiletto heeled shoes allegedly used to assault a woman was entered as evidence in a trial which saw the defendant found to be not guilty of a charge of assault and battery with a dangerous weapon.

WESTFIELD – A West Springfield woman who was arrested outside a bar after she allegedly struck another woman in the forehead with the stiletto heel of her shoe was acquitted in a jury trial Wednesday.
The assault and battery with dangerous weapon charge was lodged against Anani A. Abas, 23, of 47 River St., Apt. 3, West Springfield, by Officer Joshua Krassler March 25, 2018, who had responded to a report of a large fight in the parking lot of a North Elm Street bar earlier in the day. There he found a woman with a laceration on her forehead and “blood running down her face” who said that she had been struck in the forehead with a high-heeled shoe wielded by a woman who was still in the parking lot.
The victim identified Abas as her assailant and she was arrested.
Krassler reported that11 stitches were required to close the victim’s laceration and a photograph of the victim with a bloody wound on her forehead was introduced at Abas’ jury trial.
However, the six person jury found Abas to be not guilty of the assault and battery charge. A second charge – assault with intent to maim – was not prosecuted by the Commonwealth.