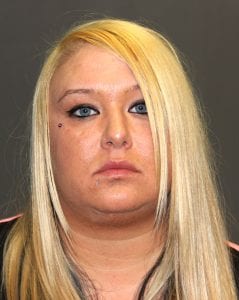 WESTFIELD – A city woman’s apparent plan to avoid paying her boyfriend $1,000 she owed to him backfired and she found herself in court answering charges for making a false police report and a false 911 call.
Then-Sgt. Stephan Dickinson reports that on Tuesday, Jan. 22, 2019, city police received two calls from passers-by who reported that a woman driving on Main Street “jumped out of her car in the middle of Main Street and stated yelling for people to call 911.” A third call came from the apparent victim herself, Danielle L. Roberts, 34, of 15 Mechanic St., Westfield, who said that her boyfriend “ripped hair out of her head from the back seat and was currently threatening her life. She also stated he stole $1,000 from her.”
Dickinson reports that he learned that Roberts was then three-months pregnant and that her boyfriend of eight months, Damond Mohown-Fee, 43, of 15 Mechanic St., Westfield — the man she claimed assaulted and robbed her – was the father-to-be.
Based on her complaint, when Mohown-Fee was found at a nearby bus stop, he was charged with assault and battery on a family or household member, assault and battery on a pregnant victim and unarmed robbery.
Mohown-Fee was held in custody and, Dickinson reports, Roberts came to the station to talk with police again.
Dickinson said that the woman acknowledged her debt to Mohown-Fee and explained that his vehicle had been in a car crash in Springfield and, since the insurance was in her name, the $1,800 insurance settlement had been sent to her. As her story unraveled, Dickinson learned that although Mohown-Fee wanted all the money to pay for his replacement car, the woman had wanted to retain a large portion of it to fix her own car so she devised the assault/robbery claim and only had $1,000 of the settlement money in cash at the time of the incident.
However, when her boyfriend was held in jail, she recanted and told the truth.
After her new story was confirmed by a computerized voice stress analyzer, the case against her boyfriend was dismissed.
She was charged with making a false 911 call and making a false crime report.
Roberts appeared before Judge Philip Contant Aug. 21 and submitted to facts sufficient to warrant a guilty finding on both of the charges. She was placed on probation for six months and assessed $50. If there is any violation of her probation, Contant ordered that “at very least ‘“Guilty” finding shall enter on each count.”
The couple has had a tumultuous history and both have come to the attention of police on several occasions.
Each of them has charged the other with assault and battery and each, when called upon to testify in support of the charges, has claimed the protection the Fifth Amendment and refused to testify. Without their testimony, in both cases the charges were dropped.
There is, however, a pending case in which Mohown-Fee is facing assault charges after Roberts reported that Mohown-Fee attacked her in their home in view of their home security video camera. Officer Scott Schuster reports in that case that “After viewing the (video) footage, it matched exactly how she described the situation”. Mohown-Fee was released upon payment of $500 cash bail pending a Sept. 12 hearing on charges of assault and battery on a pregnant victim, resisting arrest, aggravated intimidation of a witness and assault and battery on a household or family member..